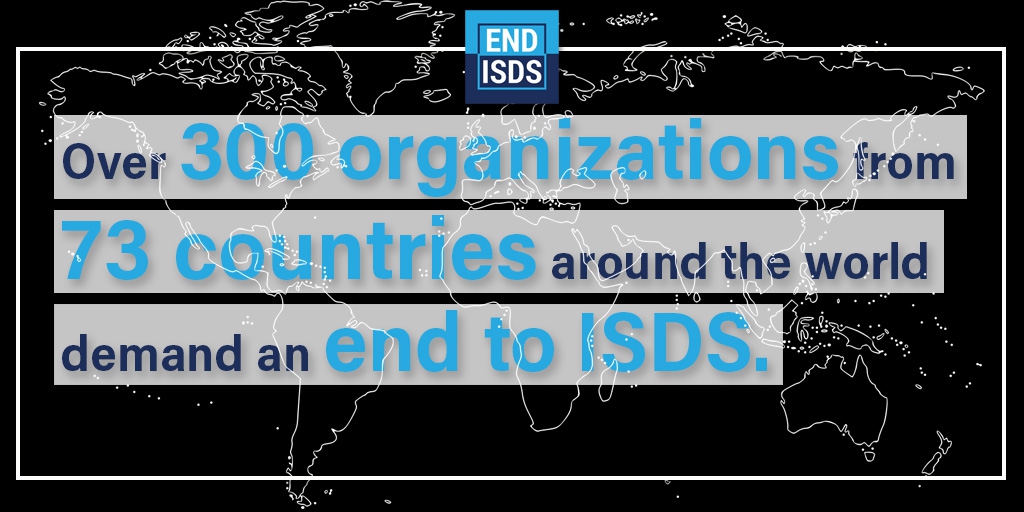 Their public letter is the latest example of a growing backlash against ISDS that the European Commission admitted had become “the most toxic acronym in Europe,” during the controversial U.S.-EU trade talks. As the number of ISDS cases filed each year has exploded and corporations have won billions of dollars in attacks on a stunning array of environmental, health, and other public interest laws, governments from South Africa to Indonesia have terminated many of their treaties that include ISDS. Even the United States, Mexico, and Canada have agreed to roll back ISDS in the new North American Free Trade Agreement (NAFTA).

The organizations that signed the letter urge fundamental reform of this ISDS system that: “empowers one class of interests – multinational corporations, billionaires and investors – to sue governments outside of domestic court systems for unlimited amounts of compensation, including for the loss of expected future profits. A vast array of domestic laws, court rulings, regulations, and other government actions are subject to such attack, including non-discriminatory policies enacted in order to promote public welfare.”

The letter is addressed to member governments attending meetings of the little-known UN Commission on International Trade Law (UNCITRAL), which provides one set of rules under which many ISDS cases are litigated. After years of public outcry against ISDS, UNCITRAL has decided to convene a working group to engage in a discussion about the need to reform ISDS. But the signatories of today’s letter fear that those who wish to save the ISDS regime are aiming to hijack the UNCITRAL reform discussion to maintain the status quo or promote half-measures around the margins that do not address ISDS’s fundamental flaws.
The signatory organisations demand that, “instead of focusing on procedural tweaks on the margins of the ISDS system, governments in UNCITRAL should put their efforts into discussing how to move away from the current investment treaty system altogether. Thus, a more constructive focus for UNCITRAL would be to concentrate on the structural problems of the investment treaty regime and to facilitate a discussion on termination or wholesale replacement of existing agreements.”

They also specifically reject attempts by the European Union to push a “Multilateral Investment Court” as a “solution,” explaining that this EU proposal “would not only fail to address most of the fundamental flaws of ISDS and the current investment treaty regime, but seems designed to keep many of ISDS’s most damaging features (and flaws) intact.”

See the full text of the letter and list of signers here.