Private avant-prémière and panel discussion: The Illusion of Abundance – CIDSE
Skip to content

Private avant-prémière and panel discussion: The Illusion of Abundance

The private avant-prémière of the documentary film The Illusion of Abundance (La Ilusión de la Abundancia) co-produced by CIDSE and other 20 civil society organisations. The film follows the lives of three women defending their communities and territories from the activities of some of the largest corporations in the world.

The screening will take place on the 12th of October at the European Parliament at 5.30 pm and will be followed by a panel discussion around the question “EU Due Diligence Directive: can it change corporate conduct and protect women environmental defenders?”.

The Illusion of Abundance follows three women facing the destructive actions of some of the largest transnational corporations in Latin America. Bertha lives deep in the Lenca indigenous region of Honduras, Carolina is in the middle of a historical mining region in Brazil, and Maxima resists from her house in Peru, next to the world’s second largest gold mine. Despite the distance between them, these women share a common goal: defend the rights and livelihoods of their community, and protect our planet, land, rivers and climate from harmful corporate activities.

At the same time, legislation is being developed at the regional and national levels requiring companies to carry out human rights due diligence, such as the newly proposed EU Directive on Corporate Sustainability Due Diligence, and the negotiations for a binding international treaty on business and human rights.
Can laws change corporate conduct and advance human rights? Is there accountability for those companies abusing human rights and contaminating the environment? Do victims and rights defenders have access to an effective remedy?

Interventions from
Bertha Zúñiga Cáceres – Environmental defender, Honduras
Event hosted by the Progressive Alliance of the Socialists and Democrats and the Responsible Business Conduct Group in the European Parliament 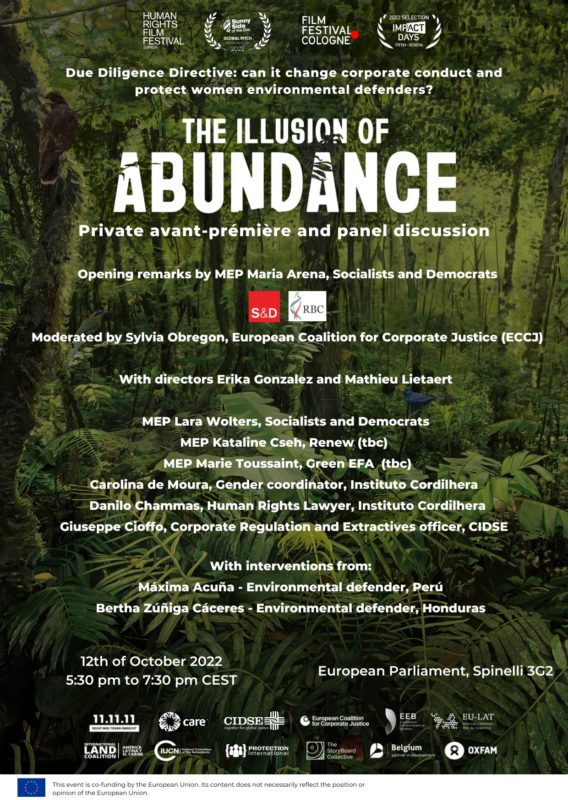