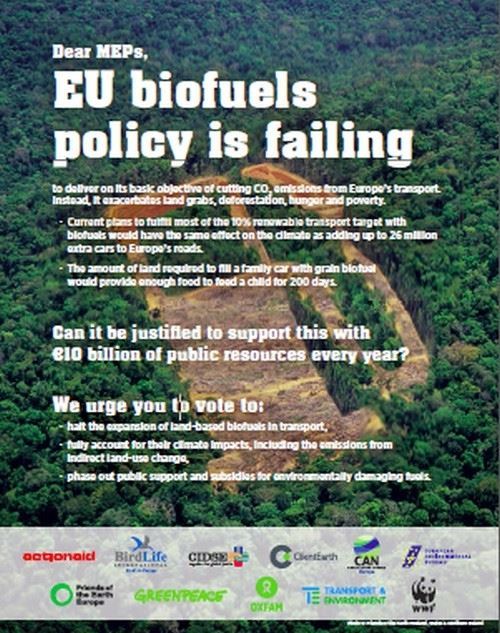 Together with other NGOs and networks, CIDSE co-signed an advert published in the Parliament Magazine on 10 June 2013, calling on the European Union (EU) to change its current biofuels policies and halt further expansion of land-based biofuels for the EU.

In addition, CIDSE signed up to an Open Letter which has been sent to EU decision makers: the letter contains 112 signatories, including CIDSE member organisations Broederlijk Delen, KOO, Misereor and Trocaire.

As Catholic development agencies CIDSE members work together to achieve global justice. Since biofuels are putting in jeopardy the food security of many of the world’s poorest and most vulnerable communities, we stand against the EU’s pursuit of biofuels policies and call on the EU to pursue responsible energy policies which do not negatively influence the lives of people in developing countries.

On the 20th of June and 10th of July 2013, two important European Parliamentary Committees, the Industry, Research and Energy Committee (ITRE) and the Environment, Public Health and Food Safety Committee (ENVI) will be asked to express their vote on the European Commission’s proposed legislation to reconsider the use of biofuels for addressing climate change.

It has been widely acknowledged that the direct, and especially indirect use of biofuels through the increasing pressure on land, is leading towards a destruction of vital ecosystems, causing similar or even higher greenhouse gas emissions than the fossil fuels they are replacing.

Furthermore, Europe’s increasing demand for biofuels is pushing higher and more volatile food prices, as food crops are grown for fuels. This demand poses negative impacts on food security and thus exacerbates hunger in the most vulnerable countries of the world.

The advert and the Open Letter are urging Members of the European Parliament (MEPs) to vote in favour of imposing a cap on land based biofuels as well as to fully account the impacts on climate, including those emissions coming from indirect land-use change.