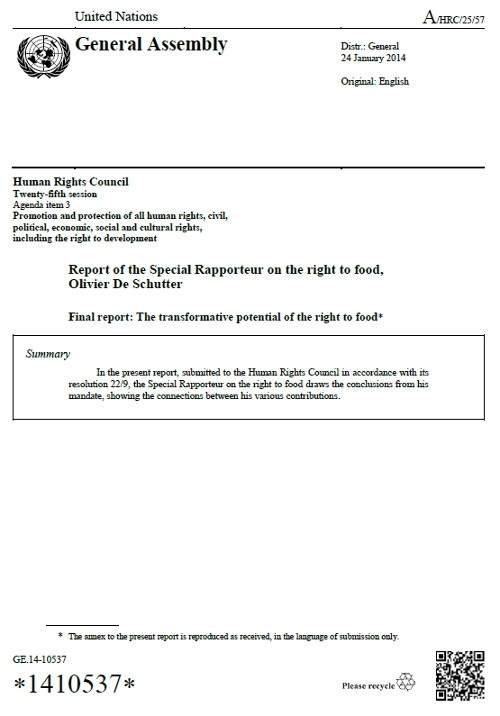 The United Nations Special Rapporteur on the right to food, Olivier De Schutter, today called for the world’s food systems to be radically and democratically redesigned to ensure the human right to adequate food and freedom from hunger.

“The eradication of hunger and malnutrition is an achievable goal. However, it will not be enough to refine the logic of our food systems – it must instead be reversed,” Mr. De Schutter stressed during the presentation of his final report* to the UN Human Rights Council after a six-year term as Special Rapporteur.

The expert warned that the current food systems are efficient only from the point of view of maximizing agribusiness profits. “At the local, national and international levels, the policy environment must urgently accommodate alternative, democratically-mandated visions,” he said.

Objectives such as supplying diverse, culturally-acceptable foods to communities, supporting smallholders, sustaining soil and water resources, and raising food security within particularly vulnerable areas, must not be crowded out by the one-dimensional quest to produce more food.”

“The greatest deficit in the food economy is the democratic one. By harnessing people’s knowledge and building their needs and preferences into the design of ambitious food policies at every level, we would arrive at food systems that are built to endure,” Mr. De Schutter said.

“Food democracy must start from the bottom-up, at the level of villages, regions, cities, and municipalities,” the rights expert said.

“Food security must be built around securing the ability of smallholder farmers to thrive,” he noted. “Respect for their access to productive resources is key in this regard,” he added, calling for priority investments in agroecological and poverty-reducing forms of agriculture.

Mr. De Schutter urged cities to take food security into their own hands. “By 2050 more than 6 billion people – more than two in three – will live in cities. It is vital that these cities identify logistical challenges and pressure points in their food supply chains, and develop a variety of channels to procure their food, in line with the wishes, needs and ideas of their inhabitants.”

“Emerging social innovations in all parts of the world show how urban consumers can be reconnected with local food producers, while at the same time reducing rural poverty and food insecurity,” he said. “Such innovations must be supported.”

The expert warned, however, that these local initiatives can only succeed if they are supported and complemented at the national level.

“Governments have a major role to play in bringing policies into coherence with the right to food, and ensuring that actions are effectively sequenced, but there is no single recipe,” he said.

“In some cases,” Mr. De Schutter noted, “the priority will be to promote short circuits and direct producer-consumer links in order to strengthen local smallholder farming and reduce dependence on imports. In other cases, the prevailing need may be to strengthen cooperatives in order to sell to large buyers under dependable contracts.”

The key lies in democratic decision-making, he stressed. “National right to food strategies should be co-designed by relevant stakeholders, in particular the groups most affected by hunger and malnutrition, and they should be supported by independent monitoring.”

Mr. De Schutter highlighted in his report the promising efforts of the UN Committee on World Food Security (CFS) to bring together governments, civil society, international agencies and the private sector to collectively address the challenges that food systems face, but warned that “the CFS remains the exception in bringing participation and democracy into the global governance arena, and in accommodating different visions of food security.”

“Other global governance bodies must align themselves with the strategic framework provided by the CFS. The WTO, for example, must not hinder developing countries undertaking ambitious food security policies and investing in small-holder agriculture,” he said.

The Special Rapporteur underscored that attempts by developing countries to improve their food security will only be successful if there are parallel reforms in the global north.

“Wealthy countries must move away from export-driven agricultural policies and leave space instead for small-scale farmers in developing countries to supply local markets,” Mr. De Schutter said. “They must also restrain their expanding claims on global farmland by reining in the demand for animal feed and agrofuels, and by reducing food waste.”

You can read the report below or on the official page of the Special Rapporteur.