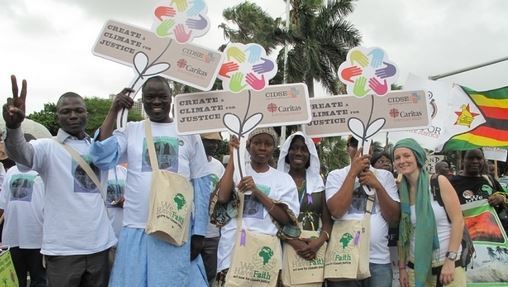 CAN Europe is shocked that EU Heads of State failed today to recognise the urgency of the climate crisis, just ahead of the release of a new IPCC scientific report warning that climate impacts are much more severe than previously thought.

Our leaders ignored the increasing impacts of climate change, both in Europe and abroad, and failed to reinvigorate the EU’s role in shaping global climate solutions ahead of the September’s climate summit convened by UN Secretary General Ban Ki-moon [3]. EU leaders today should have taken a stronger stand in calling for the 2030 EU climate and energy package to be ambitious enough to keep global warming below 2ºC and stop the spiraling effects of climate change on people and the economy.

“It is beyond belief that the EU has delayed a decision on urgent climate action. After all, discussions have been ongoing for months already while climate impacts continue to mount across Europe,” said Wendel Trio, Director of Climate Action Network Europe. “With freak weather events already creating massive economic fallout and disrupting lives all over Europe, our leaders need to pick up the pace on climate action, not kick decisions down the road. After the worst pollution in decades gripped several EU capitals earlier this month, our leaders should be pushing harder than ever for quick climate action and the health benefits it would bring to Europeans.”

“Climate change is already driving hunger, but without urgent global leadership by EU governments to radically curb emissions at home, disasters will only increase in size and severity – and Europe will not be spared,” said Natalia Alonso, Oxfam’s Head of EU Office. “Increased floods and droughts in Europe will continue to affect local harvests. In addition, over 70% of EU-imported food comes from developing countries, many of which are at great risk of climate impacts.”

The 40% greenhouse gas emission reduction target for 2030, proposed by the European Commission, is barely more than business-as-usual and not enough to confidently keep us below 2ºC of global warming, the recognized threshold for dangerous climate change, which has been a cornerstone of EU climate policy since 1996. [4] Though EU leaders called today for more action to address the EU’s energy security in the context of the crisis in Ukraine, they ignored the vast untapped energy potential of binding national targets for energy efficiency and renewable energy.

A recent Eurobarometer survey shows 9 out of 10 Europeans recognize climate change as a “very serious” or “serious” threat and that 4 out of 5 agree that fighting climate change can boost the economy and jobs in Europe. Our Heads of State simply cannot keep ignoring the demands of the people and forward-looking businesses. We call on European leaders to take ambitious decisions on 2030 climate action that will avoid catastrophic climate change, well in time for the EU to retake its leadership role at the UN climate summit in September.