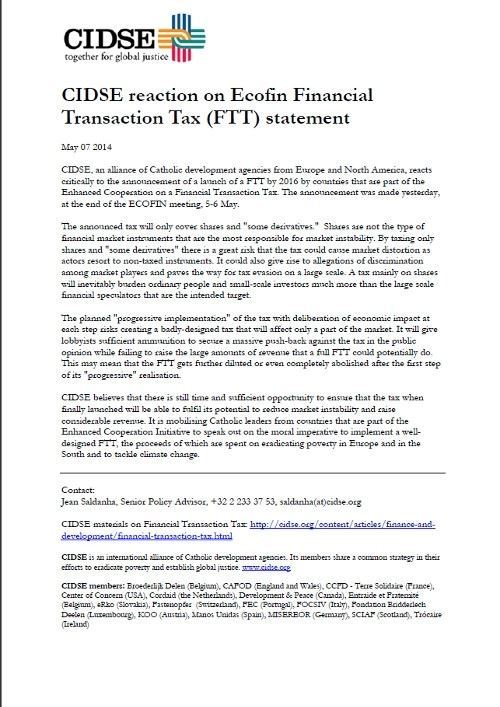 CIDSE reacts critically to the announcement of a launch of a FTT by 2016 by countries that are part of the Enhanced Cooperation on a Financial Transaction Tax. The announcement was made at the end of the ECOFIN meeting, 5-6 May.

The announced tax will only cover shares and “some derivatives.” Shares are not the type of financial market instruments that are the most responsible for market instability. By taxing only shares and “some derivatives” there is a great risk that the tax could cause market distortion as actors resort to non-taxed instruments. It could also give rise to allegations of discrimination among market players and paves the way for tax evasion on a large scale. A tax mainly on shares will inevitably burden ordinary people and small-scale investors much more than the large scale financial speculators that are the intended target.

The planned “progressive implementation” of the tax with deliberation of economic impact at each step risks creating a badly-designed tax that will affect only a part of the market. It will give lobbyists sufficient ammunition to secure a massive push-back against the tax in the public opinion while failing to raise the large amounts of revenue that a full FTT could potentially do. This may mean that the FTT gets further diluted or even completely abolished after the first step of its “progressive” realisation.

CIDSE believes that there is still time and sufficient opportunity to ensure that the tax when finally launched will be able to fulfil its potential to reduce market instability and raise considerable revenue. It is mobilising Catholic leaders from countries that are part of the Enhanced Cooperation Initiative to speak out on the moral imperative to implement a well-designed FTT, the proceeds of which are spent on eradicating poverty in Europe and in the South and to tackle climate change.