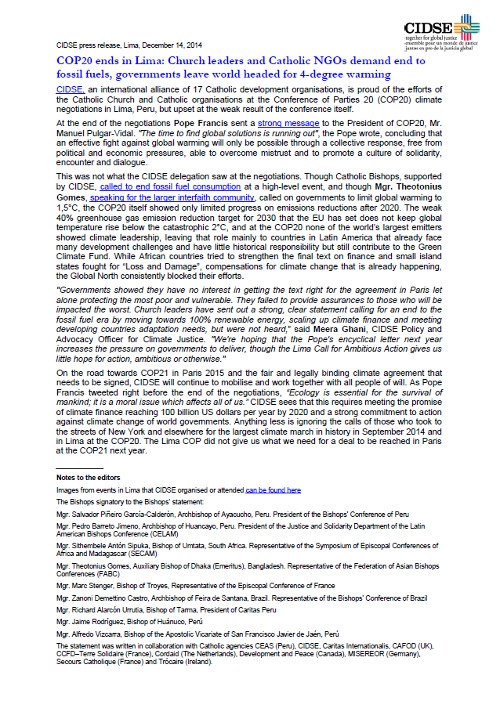 CIDSE, an international alliance of 17 Catholic development organisations, is proud of the efforts of the Catholic Church and Catholic organisations at the Conference of Parties 20 (COP20) climate negotiations in Lima, Peru, but upset at the weak result of the conference itself.

At the end of the negotiations Pope Francis sent a strong message to the President of COP20, Mr. Manuel Pulgar-Vidal. “The time to find global solutions is running out”, the Pope wrote, concluding that an effective fight against global warming will only be possible through a collective response, free from political and economic pressures, able to overcome mistrust and to promote a culture of solidarity, encounter and dialogue.

This was not what the CIDSE delegation saw at the negotiations. Though Catholic Bishops, supported by CIDSE, called to end fossil fuel consumption at a high-level event, and though Mgr. Theotonius Gomes, speaking for the larger interfaith community, called on governments to limit global warming to 1,5°C, the COP20 itself showed only limited progress on emissions reductions after 2020. The weak 40% greenhouse gas emission reduction target for 2030 that the EU has set does not keep global temperature rise below the catastrophic 2°C, and at the COP20 none of the world’s largest emitters showed climate leadership, leaving that role mainly to countries in Latin America that already face many development challenges and have little historical responsibility but still contribute to the Green Climate Fund. While African countries tried to strengthen the final text on finance and small island states fought for “Loss and Damage”, compensations for climate change that is already happening, the Global North consistently blocked their efforts.

“Governments showed they have no interest in getting the text right for the agreement in Paris let alone protecting the most poor and vulnerable. They failed to provide assurances to those who will be impacted the worst. Church leaders have sent out a strong, clear statement calling for an end to the fossil fuel era by moving towards 100% renewable energy, scaling up climate finance and meeting developing countries adaptation needs, but were not heard,” said Meera Ghani, CIDSE Policy and Advocacy Officer for Climate Justice. “We’re hoping that the Pope’s encyclical letter next year increases the pressure on governments to deliver, though the Lima Call for Ambitious Action gives us little hope for action, ambitious or otherwise.”

On the road towards COP21 in Paris 2015 and the fair and legally binding climate agreement that needs to be signed, CIDSE will continue to mobilise and work together with all people of will. As Pope Francis tweeted right before the end of the negotiations, “Ecology is essential for the survival of mankind; it is a moral issue which affects all of us.” CIDSE sees that this requires meeting the promise of climate finance reaching 100 billion US dollars per year by 2020 and a strong commitment to action against climate change of world governments. Anything less is ignoring the calls of those who took to the streets of New York and elsewhere for the largest climate march in history in September 2014 and in Lima at the COP20. The Lima COP did not give us what we need for a deal to be reached in Paris at the COP21 next year.

Images from events in Lima that CIDSE organised or attended can be found here.

More information on CIDSE activities at the COP20