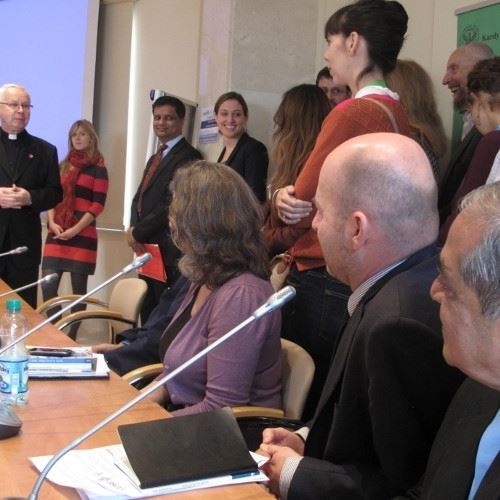 CIDSE, an international alliance of Catholic development organisations, heard dire warnings of climate change at a Warsaw conference with top-level speakers, including European Commissioner Hedegaard, Head of Holy See Delegation and Nuncio to Poland Archbishop Migliore, Scottish Minister of Environment and Climate Change Wheelhouse and Bangladeshi Bishop Gomes. The conference, co-organised with Caritas Poland and the Cardinal Stefan Wyszynski University, gathered faith-actors, civil society actors, politicians and climate scientists to work together towards climate justice on the occasion of the COP19 climate negotiations.

The Holy See representative to Poland, Head of the Holy See Delegation to the COP19, Nuncio and Archbishop Celestino Migliore, opened the conference with an inspired plea. “Climate change is an ethical challenge for our civilization, asking us what changes we need to affect in our economic life, in the structures of our society and in the way we consume.”

Recent polls conducted in Poland (by Public Opinion Research Center CBOS) show 89 % support for expanding renewable energy, with minority support for coal and lignite. A coal summit with backing from the Polish government in parallel to the COP19 negotiations and at the same time as the CIDSE conference, where Church representatives present spoke strongly of their concern for the poor and vulnerable in the world suffering most from climate change and called on governments to reduce radically exploitation of coal, oil and other fossil resources. Mr Andrzej Kassenberg of the Institute for Sustainable Development presented a study of the costs of “business as usual” for Poland and highlighted how the economy and to employment would benefit from shifting to renewable energy.

Climate Commissioner Connie Hedegaard echoed this, as she warned that continuing CO2-emissions “come with high consequences and a high price tag”. Bishop Theotonius Gomes spoke of the industrial revolution of the 19th century, and called for “a new, different type of revolution, an increase in spiritual, humanistic awareness” in which the Church can take part. Scottish Minister for Environment and Climate Change Paul Wheelhouse told the conference of how to make long-term commitments and of the high level of consensus reached also thanks to a strong engagement of the church, “as the Scottish parliament has approved climate legislation that binds not only the current government but also future ones”.

CIDSE President Chris Bain pointed to the role already played by faith actors. “In Copenhagen the climate movement, including a strong Church presence, mobilised 100 000 people. Governments at COP19 must respect the urgent needs those already affected and the compelling and moral case for change.”

CIDSE has brought a large delegation to the Warsaw climate negotiations, including high-level representatives of Church and lay-organisations, from Asia, Africa and South America, as well as from member organisations such as CAFOD (England and Wales), SCIAF (Scotland), Trócaire (Ireland), MISEREOR (Germany), CCFD-Terre Solidaire (France) and others. The conference, International conference on climate change: Faith actors working towards climate justice, was co-organised with with Caritas Poland and Cardinal Stefan Wyszynski University and focused on how local communities cope with climate change and how churches are responding to it.

On Thursday November 21 a CIDSE Side Event, Ethical and religious imperatives for a just climate deal, will be held at the UNFCCC Conference Center, in cooperation with the World Council of Churches (WCC). The Side Event, an official part of the programme of the COP19, will build on the experience of the conference and aims to bring the perspective of faith-based organisation to the COP19 itself.