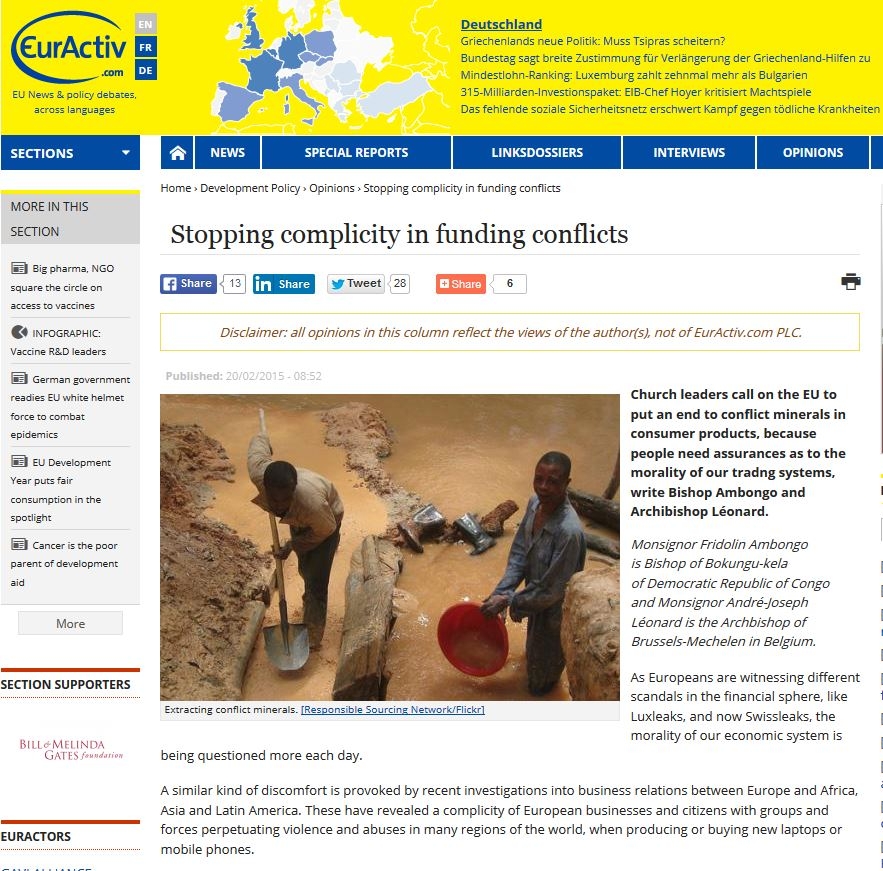 Church leaders call on the EU to put an end to conflict minerals in consumer products.

This opinion article by Mgr Fridolin Ambongo, Bishop of Bokungu- Ikela, Democratic Republic of Congo and Monsignor André-Joseph Léonard, Archbishop of Brussels-Mechelen, Belgium, was originarily published on Euractiv.com on 20/02/2015

As European citizens are witnessing different scandals in the financial sphere, e.g. luxleaks and lately swissleaks, the morality of our economic system is each day more and more being questioned. A similar kind of discomfort is provoked by recent investigations into business relations between Europe and Africa, Asia and Latin America. These have revealed a complicity of European businesses and citizens with groups and forces perpetuating violence and abuses in many regions of the world, when producing or buying new laptops or mobile phones. In many Southern countries, the extraction, processing and trade of many natural resources contained in consumer products sold in Europe finance armed groups who commit severe violations of human rights. To address this equally scandalous issue, the European Commission proposed a regulation in March 2014 with the right objective: to put an end to the use of revenues from mining to finance armed conflict. We are among more than 100 Catholic leaders from around the world who have come together in an unprecedented call for the EU rules to be binding and consistent.

The EU already proved its willingness to act strongly in 2013 on payment transparency in the extractive industries. Now, the European Parliament’s International Trade Committee will hold a key debate on the “conflict minerals” regulation next week. Parliamentarians have a crucial opportunity to continue building on this success by strengthening the weak proposal made by the Commission.

In the Democratic Republic of Congo (DRC) and Great Lakes region, binding rules have recently been put into place to certify the origin of raw materials. In the DRC, bishops have witnessed first-hand how the 2010 US legislation Dodd Frank Act, section 1502 has spurred changes on the ground by business actors of all nationalities towards responsible mineral sourcing. The European Union also has a shared responsibility to act in order to raise the global due diligence standards, not lower them.

More and more questions are raised as to the effectiveness of a voluntary scheme in meeting the objective of breaking the link between conflicts and natural resources. In the case of the financial scandals, would European citizens consider it sufficient if the EU’s response was to ask multinational companies to voluntarily declare the tax arrangements they make with different European governments? Regarding conflict minerals, the situation seems to be the same: when not obliged, multinational companies do not act. A recent research commissioned by the European commission shows that only 4% of the 330 businesses studied were voluntarily reporting on their due diligence practices. Even an eventual review to consider moving to a mandatory scheme, does not adequately reflect the urgency of helping communities suffering today from horrible violence, whom the Church is working to protect.

Companies along the entire supply chain have a shared responsibility, from extractives companies to importers, suppliers and end-users that trade products containing natural resources. Including end-user companies in the scope of the regulation would allow European citizens to bring positive influence to bear, as well as to extend to Asian suppliers.

As Church leaders we also draw attention to the need to be consistent in the natural resources covered. For our sisters and brothers in local communities who suffer from human rights abuses and violence, it does not matter if companies mine for tin or gold, which would be covered by the current proposal, or copper and diamonds in countries like Myanmar or Zimbabwe, which would not. The signatures of bishops from 35 countries are a strong cry for a responsible sourcing regulation that applies across a full range of natural resources and countries.

We recall the words of Pope Francis to the European Parliament last November: “Today, the promotion of human rights is central to the commitment of the European Union to advance the dignity of the person, both within the Union and in its relations with other countries.” … “[T]he time has come to work together in building a Europe which revolves not around the economy, but around the sacredness of the human person, around inalienable values.”

People at both ends of today’s global supply chains that join us need assurances as to the morality of our trading systems. The European Parliament, reflecting the conscience of the European people, should rise up to this challenge.