How can COP21 ensure climate justice for the poorest? – CIDSE
Skip to content 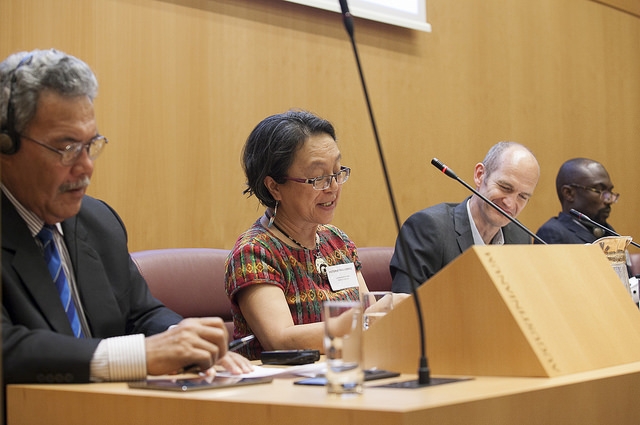 Reflections on the second panel dialogue at the Conference “People and Planet First: The Imperative to Change Course”, held in Rome 2-3 July 2015.

The room is full; the audience is impatiently waiting to hear the experiences of the speakers. For the most part, these are representatives of countries and communities that are most vulnerable to the unstable climate conditions that are worsening each year and who, to a great extent, have already felt deep changes in their lives and livelihoods as a consequence of climate change. This panel dialogue was conceived with the purpose of presenting the voices of those who are most impacted by climate change, yet those who are the least responsible for the damages done to our environment. Their voices are a powerful call to act together in solidarity against inequality and climate change.

The panel keynote speeches start with H.E. Cardinal Pietro Parolin’s heartfelt remarks on the relevance of the Pope’s recently launched Encyclical “Laudato Sí” in the context of this year’s crucial international political events, such as Financing for Development in Addis Ababa, the Post-2015 Development Agenda in New York and COP21 in Paris at the end of this year. Yet, he recalls, the Encyclical goes well beyond its situation in time. Recognizing the immensity and the urgency of the challenge we face, Cardinal Parolin calls us to redirect our steps in promoting a culture of care at all levels. He reminds us that, in the end, “what is at stake is our own dignity”. We therefore have a major responsibility in our hands, towards ourselves and towards others, and in strengthening the conviction that we are one single human family.

Later, echoing the words of the poem “Dear Matafele Peinem” by Kathy Jetnil-Kijiner, a poet from the Marshall Islands, Prime Minister of Tuvalu Mr. Enele Sopoaga comments on the difficult situation of the Atoll Nations. Due to their insular condition – no higher than 3 meters above water – they are progressively sinking into the vast Pacific Ocean and are therefore at the forefront of the impacts of climate change. While we speak of the possible consequences of rising temperatures around the world, he reminds us that there are nations, like his, that are experiencing the impacts at this very moment. Continuous typhoons and cyclones, and rising sea levels, have altered the islands’ economic and social stability, as the lives of its inhabitants are directly threatened each year, their houses destroyed, their water sources contaminated and their crops ruined. “Our people are already suffering”, he says, “If nothing is done urgently to address the causes of climate change, the whole world is bound to feel its irremediable consequences”.

What are we to expect from COP21? What type of leadership is needed in these negotiations? “We must take this as the defining moment to produce a statement which must be bold, ambitious and long-term oriented, global and universal to address climate change without fear. Everyone must do their outmost to reduce the causes of climate change […] and to help those who suffer from its impacts”, says the Prime Minister, who also wishes that action and leadership go well beyond climate negotiations. His words resonate amongst the attentive audience. Though well aware, we are still perhaps unable to picture the magnitude of the consequences that await us if no decisive action is taken. Mr. Sopoaga tells us that Tuvalu is ready to do its part; it has set a target to have 100% renewable energy resources for the year 2020. Will countries most responsible for the ecological crisis step up to the challenge as well?

After the keynote speeches, the discussion starts with Mr. Pa Ousman Jarju, Minister of Environment, Climate Change, Water Resources and Wildlife for Gambia. He comes from the group of the 48 least developed countries and, like the previous example, one that is already facing the effects of climate change. It is estimated that by 2080, the capital city of Gambia will go underwater if we continue under the ‘business-as-usual’ paradigm. For a country that is 0.01% responsible for global emissions, it seems unfair to be directing its revenue and the loans it has demanded towards short-term unsustainable industries, while it could be spent on poverty alleviation and tackling climate change. He says that the Pope’s Encyclical has come at the right moment as it calls for global efforts, involving everyone to fight climate change and environmental degradation. “Global efforts means that the new agreement to be achieved in Paris must be participatory, universal, comprehensive, taking into consideration the common but differentiated responsibilities and the special circumstances of the most vulnerable communities and countries”. From the Gambian perspective, in spite of having very limited finances, technical and human resources, the country is working on submitting an Intended National Contribution for the Paris agreement. This was done through a process of consultation all around the country in order to perceive the priorities of its population in terms of climate change. Here too, we have another developing country that is providing a strong example of what decision-making should look like and presenting a challenge to richer nations.

Don Leonardo Steiner, Secretary General of the Brazilian Bishops’ Conference, tells us about the difficult conditions of more than 60 indigenous communities living in the Amazon. These have had to suffer the damages of water contamination and soil erosion derived from the massive deforestation that is eating away the Amazon forest. Here, he points out, “All these communities suffer greatly from what we call ‘development’, which literally means ‘to go forward’. But as our society ‘goes forward’, these communities are more and more marginalized, from our recognition and our society”. There is no doubt that it is time to address this fundamental and unbearable imbalance. Mrs. Victoria Tauli Corpuz, UN Special Rapporteur on the Rights of Indigenous Peoples, joined this call as, from her own experience, she knows than about 400 million indigenous peoples all over the world inhabit, for the most part, the most vulnerable regions and most fragile ecosystems, and therefore the impact of climate change on their communities, cultures and livelihoods is direct and has dramatic consequences, despite the fact that they are the least responsible for the causes of climate change.

But, indigenous peoples also suffer from some of the solutions put across to address climate change. For example, the construction of hydroelectric dams, now regarded as a source of renewable energy, or biofuels monocultures, widespread in many countries, are regarded as strategic solutions. Nonetheless, these have caused extreme violations, as they threaten the safety and the rights of indigenous peoples to have control over their lands, access to water resources, to justice and food security. For her, the encyclical is very timely as it reinforces the views of indigenous peoples and gathers the critique they have of modernity and the concept of development. It sustains that this kind of development will not bring the solutions that are needed towards climate justice; on the contrary, it is one of the sources of the problem.

Climate change is undoubtedly the defining existential challenge of our time. While I listen carefully to these testimonies, I question the capacity of climate negotiations to muster the urgent political will that is needed to respond to this paramount test. What is certain, however, is that we simply cannot wait for short-term minded governments and businesses to provide reasonable solutions. If COP21 is to ensure climate justice for the most vulnerable, it must bring them on board, count with their voices and their ideas on how best to respond to the challenge, as they should be part of the decision-making process at all levels; make the respect of human rights and human dignity the central point of departure for any action, and take urgent and decisive steps towards socially and environmentally just solutions. Every day that we miss, increases the scope of the challenge and the risks. We must act now and we must act together. 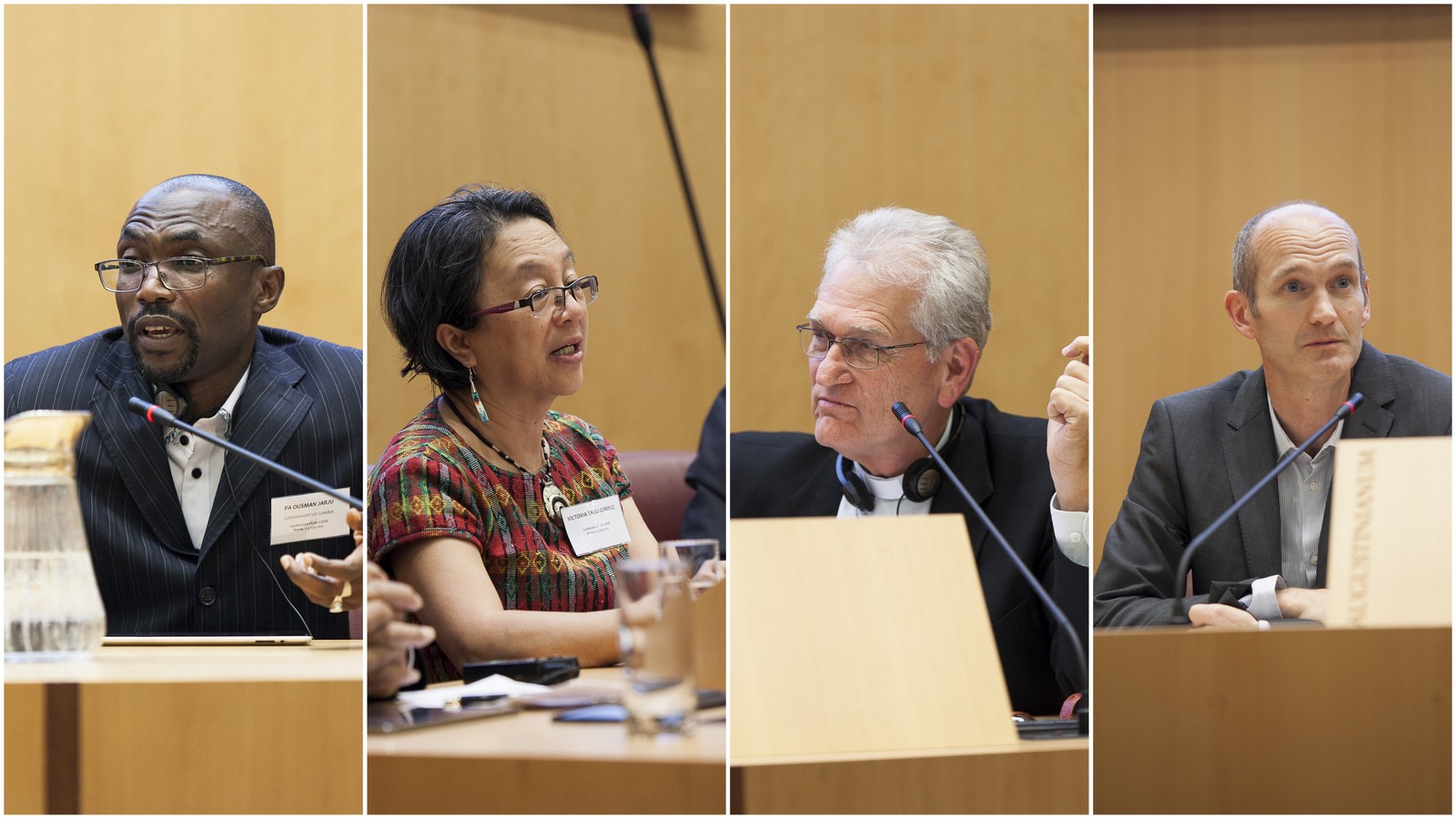