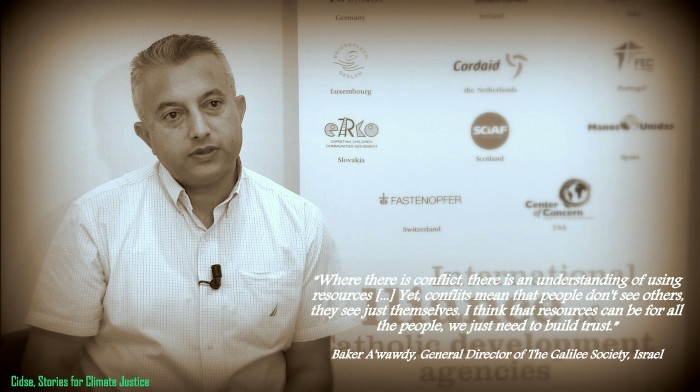 How does climate change affect conflict situations? Drawing from the situation in Israel-Palestine, this month’s “Stories for Climate Justice” explores the relation between conflict, climate change, and climate injustice.

“Where there is a conflict, there is an understanding of using resources […] Yet, conflicts mean that people don’t see others, they see just themselves. I think that resources can be for all the people, we just have to build trust”.

Could climate change be a direct cause conflict in the near future? No longer an unperceivable, sporadic event, climate change has become a tangible reality and an urgent risk for human, national, regional and international security. However, experts have warned on drawing too early a direct link between climate change and conflict, highlighting that conflicts are complex and many factors intervene when violence erupts. More than the unique cause of conflict, it seems more accurate to see climate change as a ‘threat multiplier’.

Indeed, “In situations where multiple stressors already exist, climate change may breach critical thresholds that can lead to outbreaks of conflict. This is particularly true in situations where climate change impacts actual or perceived resource scarcity, patterns of human migration or unfolds within contexts of socio-economic and socio-political inequality or existing state fragility”(1). But also, in some places around the world, it is precisely these conditions of existing political and economic vulnerability that hinder effective adaptation to and mitigation of the effects of increasingly erratic climate conditions, and are rather likely to deepen and magnify the social, economic and environmental impacts of climate change.

Baker A’wawdy, General Director of The Galilee Society, an organization that defends the socio-economic, health and environmental rights of Palestinians living in Israel, gives us an account of the difficult situation that the Palestinian population lives within a context of occupation and uncertainty in their own territories. In relation to climate change, one of the major issues is the access to scarce resources and how this long-standing conflict affects the capacity of the Palestinian population to adapt to expected changes in weather patterns in the region.

As alluded to in the video, the internal context of forced internal displacement, illegal resource exploitation in occupied territories and control of ‘shared’ yet scarce water resources are major issues that the Palestinian population is confronted to everyday. These cases illustrate how conflict situations endanger the possibility of generating resilient communities and societies in the face of major climate changes. Baker A’wawdy mentions the case of the Bedouin population, forcibly displaced despite being citizens of the State of Israel. The villages where they have settled (established either before the creation of the State of Israel, or created under a military order in the 1950’s) are not recognized. As a consequence, building permits are not authorized and basic public services are denied. The Bedouin families risk having their homes demolished and being forced to move to other villages and left into poverty.

In occupied territories, particularly in the West Bank, it is the exploitation of stone quarries that have lead to generalized health and environmental damages for Palestinians. Shortly after its occupation in 1967, Israel established several stone quarries in the West Bank. Today, there are 11 illegal Israeli-owned stone quarries extracting approximately 12 billion tones of stone per year. About 75% from Israeli stone quarry exploitation is transferred into Israel for consumption by the Israeli construction industry(2). This extractive activity has generated several health risks for the population living near the stone quarries due to high air pollution, while depleting Palestinian natural, non-renewable resources, with a high environmental cost.

Yet, perhaps, the most pressing issue is the lack of access to adequate, safe and clean water resources for Palestinians living on the West Bank and the Gaza strip. Palestinian per-capita consumption is four times lower than Israeli use. In the West Bank, approximately 300,000 Palestinians are vulnerable to water scarcity. Israeli settlers in the West Bank, by contrast, are serviced by Israel’s national water authority and it is estimated that Israel consumes over 86% of the West Bank’s principal aquifer, while controlling Palestinian extraction and prohibiting new wells. In times of drought, access to water for the Palestinian population is seriously limited(3).

As in other highly vulnerable regions in the world, recent climate predictions project that significant warming, a decrease in rainfall patterns and increased intensity of extreme weather events will have particular implications for water resource availability and agriculture in Israel-Palestine. Nevertheless, the effects are already tangible, and worsening climate conditions are already a reality for Palestinians, who, in addition to the uncertainty of war, occupation and resource deprivation, must face the consequences. In this sense, the implications of climate change on the livelihoods of people living in this region cannot however be addressed separately from the existing geopolitical and environmental impacts of occupation and conflict in the region. Without the means and the capacity to adapt and mitigate the possible consequences of extreme climate events, the Palestinian population is at risk of a deepened humanitarian tragedy.

It seems important therefore to remind ourselves that it is always the world’s poorest and most vulnerable who are the first and worst affected by adverse climate events, while having contributed very little to greenhouse gas emissions. In this sense, the transformation of our societies and our environment is urgent and inherently linked to achieving climate justice and human rights for all. There is no more time to waste.

To learn more about our work on Israel-Palestine, visit: https://www.cidse.org/palestine-israel.html