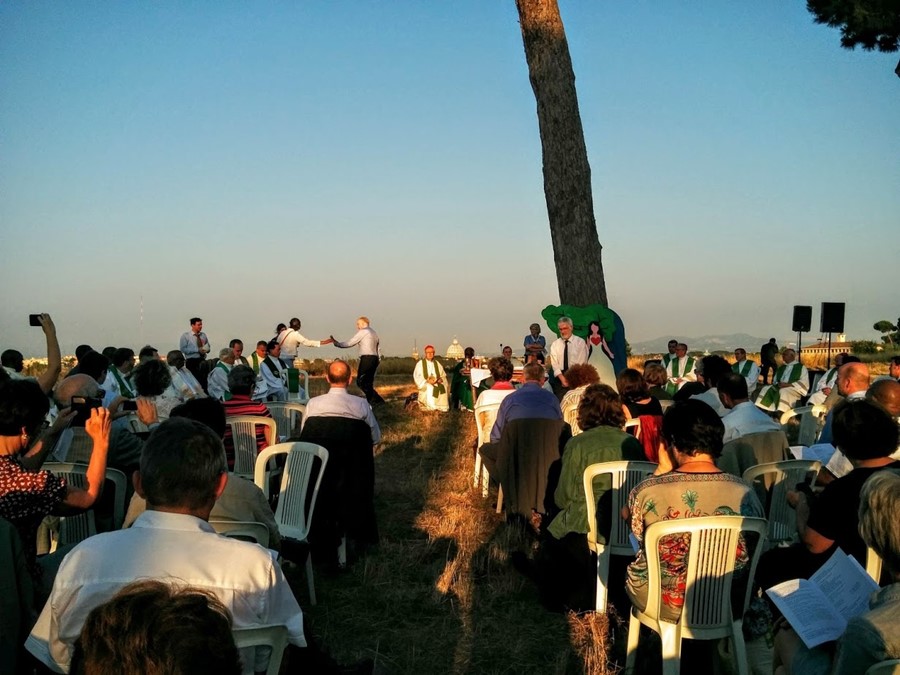 The conference “People and Planet First: the Imperative to Change Course” provided an opportunity to collect views about the encyclical and climate change from a variety of great speakers.

Today, 1 September, is the Catholic “World Day of Prayer for the Care of Creation”; the outcome of an initiative by Pope Francis announced in August. This day is dedicated to the care for creation and aims to highlight environmental concerns ahead of the Climate Change conference COP 21, which will take place in November in Paris. Today also follows on from the Pope’s Encyclical Laudato Si’, which sparked a worldwide reflection, inside and outside the Catholic World, on environmental concern and the steps we need to embark on to protect our common home. September 1st is also the day Orthodox Christians mark for protection of the environment: this gives the gesture added symbolism and signals openness between the Eastern and Western branches of Christianity.

In this same vision of openness to different realities and people, CIDSE organized a conference in July entitled “People and Planet First: the Imperative to Change Course”. During the two-day event speakers and participants shared their views about the encyclical and the transformation needed to fight climate change.

Cardinal Peter Turkson, President of the Pontifical Council for Justice and Peace

“The Pope wants us to care for the earth so the earth will take care of us”.

In this interview Cardinal Turkson talks about the impact of the encyclical on the United Nations, and the relationship between peace, care for creation and care for nature.

“The problem with climate action is that it has always tended to seem remote, almost like a luxury that you can care about if you don’t have anything more urgent to care about. The task is to articulate a vision for a post-carbon economy that is better than the economy we have right now, for the vast majority of the people on earth, that would tangibly improve lives”.

In this interview Naomi Klein shares the points of the encyclical that spoke to her the most, including its critique of ‘throw-away culture’ and the need to shift to a caring culture. In the interview she also presents some concrete actions needed to fight climate change.

“What impressed me very much about the encyclical was its holistic nature, the intellectual strength of it in pulling together all the elements of the integrated ecology; it went further than climate justice.”

In this interview Mary Robinson focuses on the elements of the encyclical that spoke to her the most, and highlights her only reservation: the fact that it didn’t highlight the importance of the empowerment of women and girls. Ms. Robinson also highlights the impact of the encyclical on the political world and explains what governments need to be doing to set us on the path to zero emissions.

“We must stop reasoning within the paradigm of endless growth, relying on GDP growth, the growth of produced wealth, which is an ideology based on the illusion and belief that our resources are infinite.”

In this interview Sr. Renouard challenges the dominant economic paradigm based on growth, as it doesn’t acknowledge the finite nature of our resources. Sr. Renouard explains the need to use our creativity to generate activities and create employment in ways that are fair for all.

“We have to enter in the frame of mind that we have to change our lifestyle and adopt a more sober lifestyle which is less harmful to the environment, which is more respectful. The culture of waste, which the Pope often talks about, should be less present.”

Cardinal Parolin talks about the impact of the encyclical on the important political events of 2015. He also focuses on what each of us can do to fight climate change, including making the shift to a lifestyle which is based less on waste.

“Indigenous people, even if they are 5% of the total world’s population, they compose 15% of the world’s people that are in poverty. […] How would you even deal with a situation if you don’t even have the means to adapt and to adjust to the changes brought about by climate change?”

“As young people, we feel that the encyclical really is speaking to us to us, and also we feel that it is really telling us to stand up and to do something.”

Monicah Wanjiru gives her point of view on how the encyclical has been received by young people, and she provides an example of youth engagement for climate change in Africa.

“As the most vulnerable countries in the UNFCCC process we expect a very ambitious agreement in Paris that would answer that the developed countries take the lead in reducing the emissions, but that all parties would also engage in reducing their emissions.”

Pa Ousman Jarju explains how The Gambia is affected by climate change, with phenomena like erosion of the coastline taking place at a very fast rate. He also mentions the adaptation initiatives that The Gambia is implementing and focuses on the Least Developed Countries’ expectations for COP 21.