Colombia: The mining and energy “locomotive” against the people – CIDSE
Skip to content 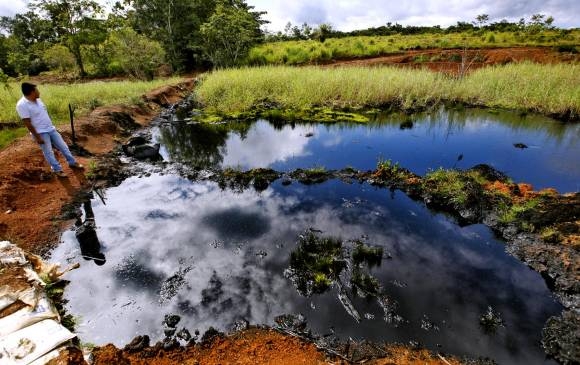 Communities in Colombia fight for the defense of their rights and the protection of the environment, despite repeated attempts of repression by special police forces. Watch their story.

In July 2015, CIDSE issued an urgent action to draw attention to the violent repression suffered by the villagers from El Nogal, a village in the Valparaíso municipality of Caquetá, southern Colombia. The villagers were standing in peaceful resistance against the entrance of Emerald Energy plc, a subsidiary of fossil fuel corporation China Sinochem, into their territory, and were met with a highly violent repression from the special police forces.

Named by its villagers as “the doors to the Amazon forest”, this region is known for its rich underground resources in oil and minerals, and therefore falls under the radar of one of Colombia’s five main growth and economic development strategies, as stated by the National Government in its National Development Plan – the “mining and energy locomotive” of development (1). While reaping high profits for national and transnational mining and fossil fuel corporations, these activities have put fragile ecosystems, as well as indigenous, afro-Colombian and peasant farmer communities at risk. Strong social resistance from most affected communities is therefore a natural response to the exploration and exploitation activities of transnational corporations in potential mining and fossil fuel rich territories.

Through his encyclical Laudato Si’, Pope Francis has expressed his concerns on the consequences of environmental degradation due to the over-exploitation of natural resources, like mining activities, and has extended his empathy to the communities affected. In a letter addressed to the representatives of communities from Asia, Africa and Latin America on the occasion of the meeting “A Day of Reflection – United in God, We Hear a Cry”, held in Rome on July 17-19, with the Pontifical Council of Justice and Peace, the Pope made an urgent appeal for the care of our “common home” and called on the mining sector to decisively “effect a radical paradigm shift to improve the situation in many countries.”

The affected communities seek to defend and protect their rights to land, water and a healthy environment, while also advocating for the rights of nature. They know too well that, contrary to the mainstream discourse that justifies the presence of transnational corporations on the basis that these are potential motors of development and employment, their lives, the environment and their well-being will be endangered by forced displacement, highly polluted air and water resources, as well as soil erosion – all consequences of extractive activities.

Having in mind the experiences of nearby villages and municipalities, in particular within the Putumayo state – that has experienced 50 years of oil extraction – peasant farmers from El Nogal, decided to unite against the pressures of the Chinese subsidiary. However, their peaceful resistance was met with violent repression, the criminalization of its leaders.

This particular case is not unique to Colombia; it is a reality for many communities across Latin America, Africa and Asia. This is an important reason why CIDSE and its member organizations are working together towards an international legally binding instrument to ensure that corporations exercise the full respect of human rights especially within transnational business activities. We believe that such an instrument would be an important additional tool to support the struggles of these communities.

See also the stories of partners in Latin America affected by extractive industries and their fight supported by the Church: “The people, the church and the mining robbery“.