Why We Need Paradigm Shift: Mitigating Climate Change and Feeding the World – CIDSE
Skip to content 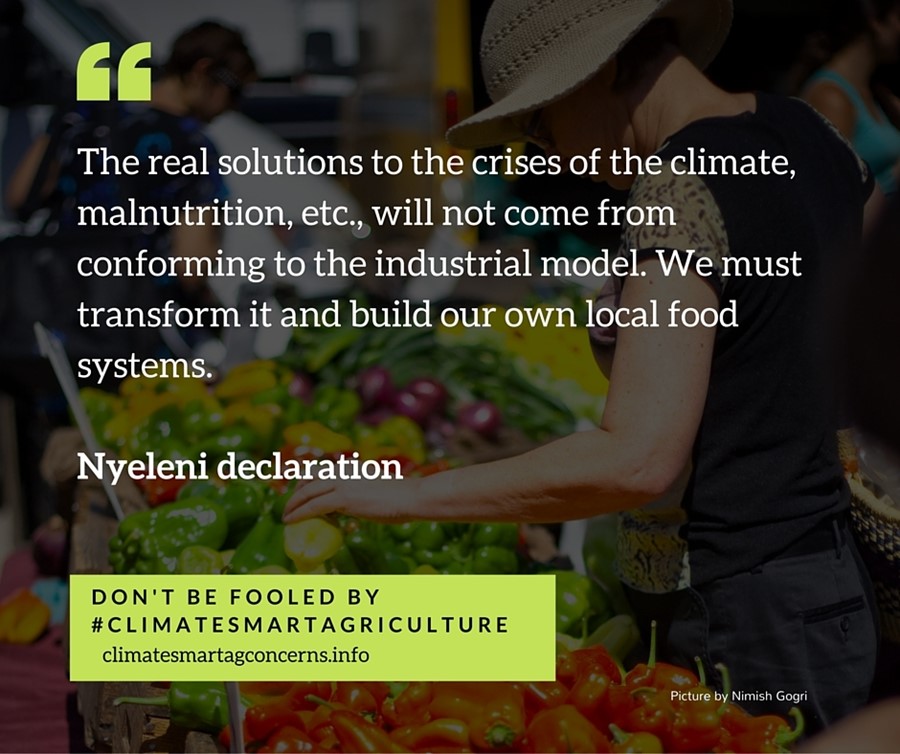 Hilal Elver, UN Special Rapporteur on the Right to Food, writes about the need for a true paradigm shift when addressing global challenges such as food security in the context of climate change. She warns of the dangers that lie behind the concept of “Climate-Smart Agriculture”.

This article was first published in Truth-out.org

Perhaps today’s biggest question is, “Will we have enough to eat in a ​hot and crowded planet in coming decades?” It’s easy to feel pessimistic when ​facing the challenge of feeding an estimated 9 billion in 2050 without destroying the planet​ in the process [1]. As food production becomes more challenging under stresses like climate change​ and dwindling resources​, Big Agriculture is becoming ever more confident and overbearing in advancing its industrial model, insisting that only agribusiness offers a solution for hunger, poverty and climate change.

While ​this may ​increase​ production, it is not a credible way to eradicate hunger and overcome food insecurity while reducing greenhouse gas emissions. Addressing only the supply side of global food systems undermines understanding of the demand side of food policies, which determines whether people can actually obtain the food they need. Increasing ​production does not solve the challenge of hunger, ​which is not a result of food shortages, but a question of access. For some time, the world has been producing more than enough calories to adequately feed the global population. It is my claim that a human rights approach is vital to eradicate hunger, and to reach food security by closing the gap between the adequacy of supply and the inadequacies of access.

​”Climate smart agriculture,”​ first articulated in 2009 by the World Bank and subsequently developed in 2010 by the Food and Agriculture Organization of the United Nations, ​is proposed as a solution [2]. ​The argument is that it increases productivity in a sustainable way, ​boosts resilience and reduces greenhouse gas emissions while contributing to the achievement of national food security and development goals.

However, these claims have been disputed by civil society groups, including those representing peasants and farmers, as well as faith-based organizations. ​​In a joint statement, ​”Don’t be fooled! Civil society says NO to ‘Climate Smart Agriculture’ and urges decision-makers to support agroecology,” more than 350 organizations​ – including Via Campesina, Greenpeace, Slow Food, ​the International Federation of Organic Agriculture Movements​, Friends of the Earth, the African Food Sovereignty Alliance, Actionaid, Coopération Internationale pour le Développement et la Solidarité (CIDSE) and many more – explain​ their concerns ​ahead of the COP 21 climate change conference in Paris this December [3].

There are many reasons to be suspicious about “too good to be true” hype. First​, the absence of measurable criteria makes it impossible to evaluate the sustainability of the approach. Second, it ignores the right to food, which alone can ensure that those who are hungry are able to obtain food. Third, as there is a limited understanding of agricultural resilience, this idea incorporates a misplaced confidence in climate change mitigation strategies ​​and fail​s to take account of the historical responsibility of the developed countries in relation to greenhouse gas​ emissions. Most importantly, the lack of clarity around the concept​​ enables socially and environmentally detrimental practices to be ​included.

​While the​ aims of climate smart agriculture are ​laudable, no details are given as to how the end goal is to be reached other than by simply presupposing that ​the approach is a solution for each and every problem.

One of ​its supporters is the new Global Alliance for Food Security and Nutrition, a voluntary initiative, leveraging policy changes to help corporations increase control of agricultural markets and resources in both the Global South and the Global North. While organizations such as the World Committee on Food Security and the United Nations Framework Convention on Climate Change are appropriate and legitimate forums for tackling the challenges of food security and climate change, the Alliance has pushed for its own initiatives, establishing a roadmap during the UN Secretary General’s Climate Summit in September 2014 to build support for ​the approach as the recommended response to climate change. There is also a real danger that ​it will be connected with the Green Climate Fund in the near future.

Member countries at the Paris climate change conference should be warned not to agree to the inclusion of ​​the term in the “agenda of solutions,” or in the influential outcome document – a regressive move. ​​The Alliance lacks both transparency and a governance structure that ensures adequate social and environmental safeguards. It gives corporations access to decision making, yet provides no adequate accountability and monitoring mechanisms to ensure legitimacy, coherence and transparency of their proposed involvement in shaping the agricultural policies of countries [4]. According to a 2015 CIDSE ​​report, 60 percent of the private sector members of the Alliance (​17.2 percent of the total membership) ​we​re related to the fertilizer industry, as opposed to 3.4 percent ​who are farmers [5].

The industrial model is again being privileged over small-scale farmers who – in large parts of the developing world, particularly in Africa and Asia – provide over 80​ percent of the food consumed by the resident populations​, food produced largely as a result of agroecological methods. ​South America, Asia and Africa show us that small-scale farmers can feed the world with sustainable farming. This achievement is all the more remarkable as the rules governing production are rigged in favor of industrial agriculture [6]. The benefits of agroecology go beyond productivity and increasing yields. These include promoting human rights to food, reducing the gender gap, increasing employment and income, increasing agricultural biodiversity, improving health and nutrition, and most importantly, addressing climate change [7].

W​hat additional benefits can be expected by establishing these new emerging platforms for climate smart agriculture?​ Convincing answers have not yet been given, and the available evidence invites skepticism. Instead, agroecology is the most promising path to food security, with the right to food at its core.

6. From the roots up: how agroecology can feed Africa, Global Justice Now Report, February, 2015