Looking back at the High-level Meeting on Climate Change in New York, September 2015 – CIDSE
Skip to content 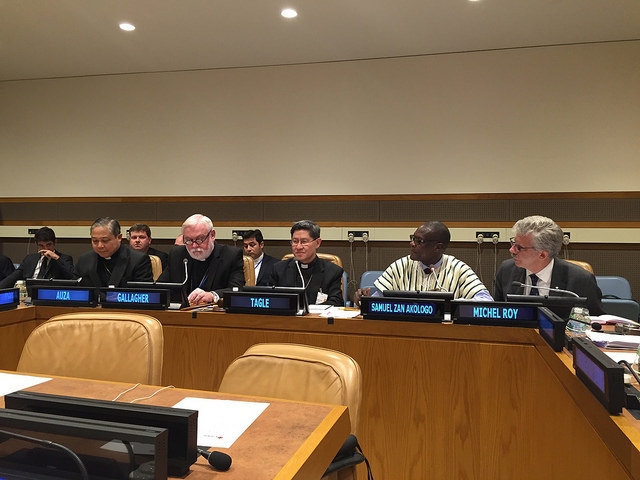 This past September, during the United Nations General Assembly (UNGA) in New York, CIDSE and Caritas Internationalis,held a High-level event on Climate Change, in preparation to the upcoming UN Climate Summit in Paris (COP21).

On Saturday 26th, during the United Nations General Assembly (UNGA) in New York, CIDSE and Caritas Internationalis, with the sponsorship of the Permanent Mission of the Holy See to the UN, held a High-level event on Climate Change, in preparation to the upcoming UN Climate Summit in Paris (COP21).

Building up from the momentum created by Pope Francis’ opening address of the UNGA, faith leaders, civil society representatives and government ministers, discussed how the Pope’s encyclical Laudato Si’ could influence positive change both at the Paris negotiations and beyond. The encyclical is the first to focus specifically on the environment, advocating for the respect of human dignity and the care for creation, while making a stand for a radical transition away from an economic model based on fossil fuel extraction and over-consumption that often encourages exclusion over participation, equality and equity; a message that has resonated strongly within Catholic communities and beyond.

In his keynote speech, President of Caritas Internationalis Cardinal Luis Antonio G. Tagle, highlighted the causes and consequences of climate change, reflecting back from his own experiences in The Philippines, the country where he is from. He stressed on the moral imperative of tackling climate change underlining that it is the most vulnerable populations who are most at risk, “Even in my own part of the world, I witness how over-consumption and waste inflict wounds on mother earth and take precious resources away from the poor. Indeed the urgent cry of the earth and the cry of the poor call for our intent hearing.”

As the Pope calls for a radical transformation of our consumption patterns and our relationship with nature and the human family, Cardinal Tagle argues that a focus on integral ecology is important and should inspire the Paris Agreement, “[…] tackling climate change directly touches the eradication of poverty, hunger and malnutrition. Integral ecology demands a human rights-based approach in the Paris agreement. In particular, to ensure the right of every person to have access to adequate food at all times, we hope for an agreement that recognizes the primacy of food security for all.”

Interdependence between nature and human life was highlighted by several speakers. They expressed that Paris provides a crucial moment for decision-making, where common universal commitments should be taken and should predominate over national interests, as Nicolas Hulot, Special Envoy of the French President for the Protection of the Planet, expressed.

Significant attention was given to the role of developing countries and their essential participation in the negotiations. Foreign Affairs Minister of Tuvalu, H.E. Taukelina Finikaso, stressed the need for developing countries to acquire the necessary means to recover from climate change impacts. This was also echoed by Cardinal Tagle’s message, highlighting the need to “hear the victims’ powerful words”, and making them central to the Paris agreement, which should also address issues of both adaptation and mitigation measures to tackle climate change.

Drawing from the experiences of Guatemala, where there are problems of deforestation due to the cultivation of intensive monocultures, such as African palm oil and sugar cane, Cardinal Álvaro Lionel Ramazzini pointed out that lack of control and regulations on transnational companies have caused significant damage to water resources in the region and are often linked to episodes of violence and human rights abuses. This, he says, should be addressed with strong commitments from both governments and international bodies.

The need to phase out fossil fuels, and generating a transition towards 100% renewable energy sources; the urgency to keep world temperatures well below 1.5°C; the ecological debt with present and future generations; and more broadly, generating a committed transition towards a fairer system, were also subject of discussion during this meeting.

While significant challenges remain in the run-up to Paris, Bernd Nilles, CIDSE’s Secretary General, emphasized on the fact that Paris is not the end of our efforts towards climate and social justice, on the contrary, “it is but the beginning, the start of a new transition”.