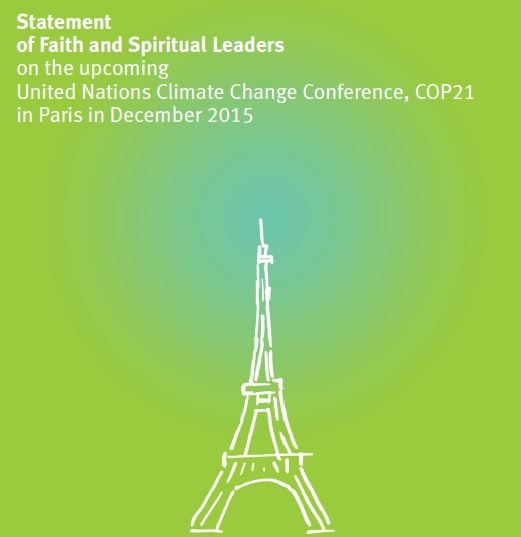 “Guided by our religious beliefs, we as faith leaders have come together to call for an ambitious Paris
outcome.”

has been handed over to the Executive Secretary of the United Nations Framework Convention on Climate
Change, Christiana Figueres. While negotiators representing 194 countries gather in Bonn this week to
work on a draft text for December’s climate conference in Paris, religious leaders are issuing this call for
an ambitious climate agreement, remind all governments to commit to emission cuts and climate risk
reduction, and pledge important contributions from their own faith communities, including divestment
from fossil energy. Among the signatories are: Rev. Dr Olav Fykse Tveit, General Secretary of the World
Council of Churches, Archbishop Thabo Makgoba, Anglican Church of South Africa, Archbishop Pedro
Barreto Jimeno, speaker of the Pan-Amazonian Ecclesial Network (REPAM), Imam Ibrahim Saidy, and
Sulak Sivaraksa, International Network of Engaged Buddhists.

Coordinated by ACT Alliance, CIDSE, Lutheran World Federation (LWF), Religions for Peace, and the
Word Council of Churches, a common statement has been published today in Bonn, Germany. The
statement was handed over to Ms. Christiana Figueres by Cornelia Füllkrug-Weitzel, Director of Bread
for the World, Germany, Karin Kortmann, Vice President of the Central Committee of German Catholics.
“We urge governments to commit to building climate resilience, phasing out fossil energies and
reaching zero emissions by mid century. We call for a robust mechanism to review and ratchet up
ambitions, transparency and accountability rules applicable to all, and the provision of finance and
support to poor and vulnerable countries”, said Cornelia Füllkrug-Weitzel.

“Guided by our religious beliefs, we as faith leaders have come together to call for an ambitious Paris
outcome. In the past month the UN family has decided to take responsibility for both, environment and
humankind by approving the Agenda 2030. In Paris the heads of states and governments have the
chance to give evidence, how serious they are. The survival of millions of human beings depends on
them,” said Karin Kortmann.

This call builds on a growing number of calls from faith groups made throughout the last 12 months,
such as the Pope’s encyclical Laudato Si’, the declaration of the New York Interfaith Summit, the
Lambeth Declaration, and the Islamic declaration on climate change. Such calls also mark the
engagement of different faith groups working together towards the same goals. The message from faith
groups is now unequivocal.

The statement, which is available in English, French, Spanish and German, can be found here:
http://actalliance.org/?p=2944