The last session of the UNFCCC before Paris has started: civil society and faith groups’ commitment – CIDSE
Skip to content 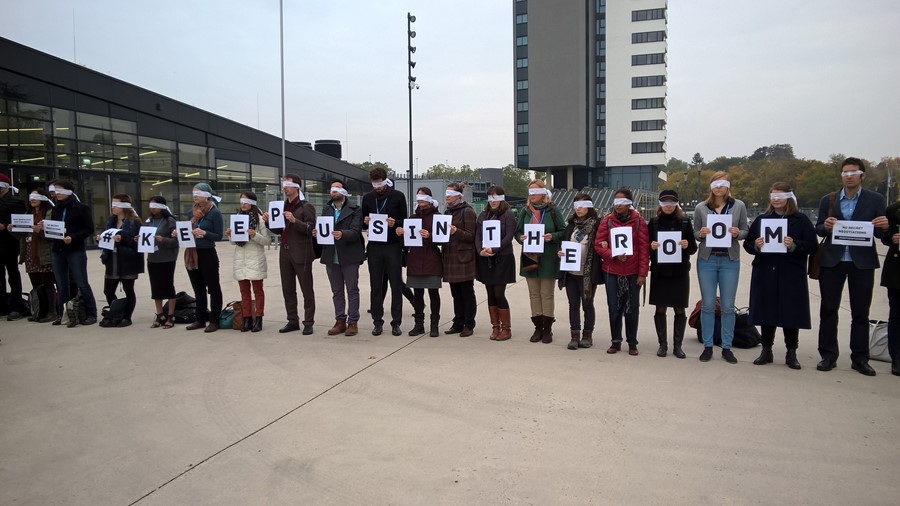 CIDSE is currently in Bonn with its members Misereor, CAFOD, CCFD-Terre Solidaire and Trocaire.

Bonn, October 21th, 2015 – A new session of the UNFCCC, the last one before a new international climate agreement is set to be struck in Paris this December, has started on Monday in Bonn. The CIDSE team with its members Misereor, CAFOD, CCFD-Terre Solidaire and Trocaire has gathered in Bonn and is actively advocating for climate justice.

We are working with many NGOs to ensure that a range of key elements in the draft text for the Paris agreement are strengthened (such as climate finance, loss and damage and adaptation), added back in (such as the language on decarbonisation as a source of emerging consensus around the long term goal), or clarified.

Like many civil society groups we were surprised by the co-chairs’ decision to exclude observers from spin-offs. We deplore the decision to exclude all observers from the negotiating sessions, and we consider this choice undemocratic, untransparent and unacceptable, and we join civil society groups calling on all negotiators and the co-chairs to open the doors to observers and to #keepusintheroom!

But what are the issues at stake for this session? Negotiators need to finish with a text, containing a few clear political options for each elements and ready to present to ministers for decision making at major events ahead of COP and which needs to become the basis for substantive negotiations.

The days before the beginning of this session have however been characterized by criticisms around the draft text. 134 developing countries, under the G77+China group, rejected the draft for the Paris agreement in its current shape. This followed a request by the Like Minded Developping Countries (LMDC) earlier in the week, asking the co-chairs to reinsert in the text some of the developing countries’ views. They had found that almost all the issues of interest to them been dropped in the draft, and others against their interests had been given a greater priority. CIDSE hopes that the draft will be modified so that the developing countries’ points of view will be adequately reflected.

Meanwhile a newly released report, “Fair Shares: A Civil Society Equity Review of INDCs”, supported by a group of NGOs and civil society groups including CIDSE, shows that there is still a big gap between what it will take to avoid catastrophic climate change, and what countries have put forward so far. The report is an independent review, measuring the fair share that each country should have in tackling climate change on the level of historical responsibility and capability. It argues that while equity is a core principle in the UN process to find a new global climate deal, countries have so far been allowed to determine their own targets on a purely national basis without reference to the scale of the global effort needed or what is fair. It puts forward the warning that we have 10 – 15 years to implement significant emissions reductions to prevent climate change getting out of control. Some recommendations for the Paris text have also been put forward by the Paris text to avoid this scenario.

Demands for the Paris agreement also came from a faith leaders’ statement, which was handed over to the Executive Secretary of the United Nations Framework Convention on Climate Change, Christiana Figueres. It was signed by 154 religious leaders from different faith groups and it is a call for an ambitious climate agreement, remind all governments to commit to emission cuts and climate risk reduction, and pledge important contributions from their own faith communities, including divestment from fossil energy.