Press release: presentation of report on the 3rd International Mission to Guatemala – CIDSE
Skip to content 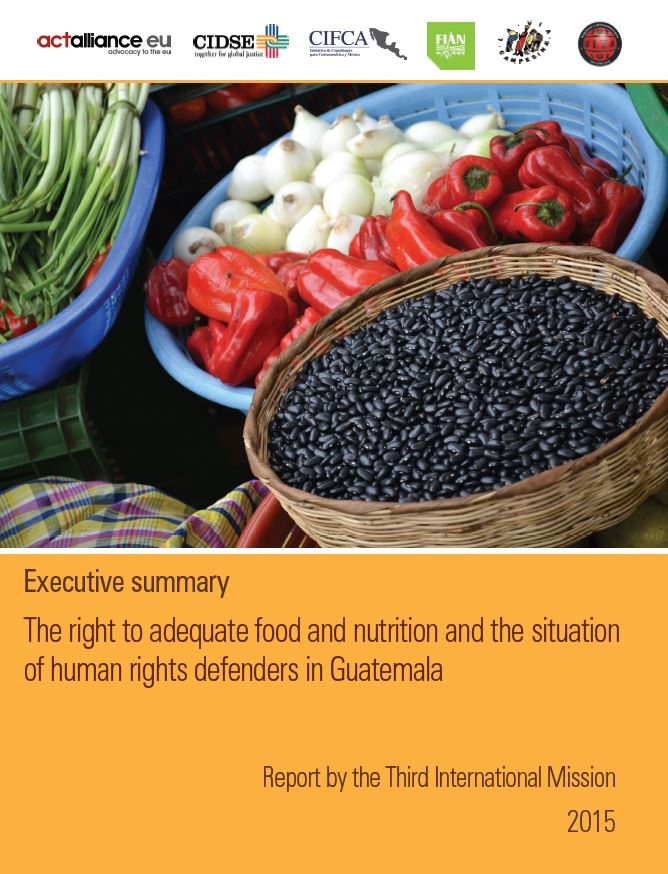 Organizations, networks and social movements publish the long-awaited report on the 3rd International Mission on the Right to Adequate Food and Nutrition in Guatemala, while also addressing the status of human rights defenders in the country. This report proposes a set of recommendations to tackle the structural causes of hunger in Guatemala.

Although Guatemala does have the legal, political and institutional framework to support the fulfilment of the right to adequate food and nutrition, and it is also rich in natural resources and economically strong, structural changes have yet to take place to improve Guatemalans’ living conditions. In terms of poverty, the State of Guatemala is the third worst Latin American country with 54.8% of its population living below the poverty line. And in addition, Guatemala has the highest level of chronic malnutrition worldwide.

According to the mission’s findings, the aid-based approach of Guatemala’s food security programs constitute a principal factor in this situation. The report points out that the lack of coherence between such programs and legislation that recognizes human rights on one hand, and public policies and laws on the use and management of natural, labor and commercial resources on the other hand.

And what’s more, the State enforces a development model based on extracting natural resources for export, which primarily benefits the international business sector. Such a model contradicts the vision of development for indigenous communities, peasants and other rural groups, given that it results in natural resource-grabbing, which limits these communities’ access to, management and control over these resources. “This production model is tailored to agribusiness and large estates. Very high levels of land concentration, coupled with the expansion of large-scale monocultures, have a direct impact on the rights of people and Guatemala’s food sovereignty, with alarming incidences of violence and the violation of human rights. The mission noted these aspects, and it really concerns us,” underlines Gerardo Iglesias, secretary of the IUF Latin American Regional Office (Rel -UITA).

Angélica Castañeda, FIAN International’s coordinator for the program on Latin America, commented on the report and emphasized the following: “As the mission confirmed, the private sector is taking the place of the State in areas related to human rights obligations, such as food assistance, education, health, security, job creation. The private sector also utilizes public space for propaganda and to regulate the population’s access to public services. In some of the cases we visited during the Mission, women and children who belong to groups and communities that are opposed to such business projects suffer from discrimination, exclusion and even threats.”

Furthermore, this report also verified that individuals defending economic, social, cultural or environmental rights (ESCER) – and especially women in these roles – are increasingly suffering from stigmatization, threats, criminalization and violence committed by the State and other actors. Amongst numerous cases, the report also refers to the women from La Puya and their strategy of “women in leadership” who point “in order to comply with this duty [of defending the rights of our community] we have to dedicate less time to our families”.

The report will be presented on 22nd October at a public event in Guatemala, as well as at international institutions and agencies over the coming months.

NOTE TO EDITORS:
-This International Mission and its report are part of an initiative of the ACT Alliance EU, the International Alliance of Catholic Development Agencies (CIDSE), the Copenhagen Initiative for Central America and Mexico (CIFCA), FIAN International, the Latin America branch of the International Union of Food, Agricultural, Hotel, Restaurant, Tobacco and Allied Workers, and La Vía Campesina International.
-The mission included several visits to the sites of significant cases of violations of the right to adequate food and nutrition, as well as meetings with governmental institutions and various social and political -actors.
-Equally advocating for just food and agriculture systems, CIDSE recently got together with over 350 civil society organisations expressing concerns over the Global Alliance for Climate Smart Agriculture (CSA). Their critiques, among which the fact that the CSA definition leaves room for damaging practices, are explained in this press release. Civil society instead put forward solutions such as agroecology, which should be the mainstream pillar of agricultural policy frameworks worldwide.

You can download the press release in English and Spanish from here below.