The pilgrimage towards Paris in Italy – CIDSE
Skip to content 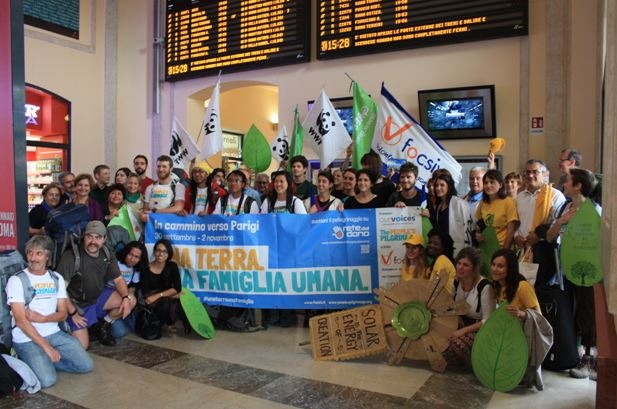 Some days ago, the pilgrimage “Una Terra, Una Famiglia Umana. In cammino verso Parigi” left Italy to continue the walking towards Paris.

The pilgrimage, covering by walking more than 800 kilometers, stopped off at 26 Italian cities: during this path the pilgrims brought their message to about 500 students from 10 schools, they met more than 15 representatives of various municipalities and received the support and the warm welcome of more than 70 civil society organizations, in their different forms at local, regional and national level.

The pilgrims took part to different 40 events confronting with the citizens and experts on the issue of climate change, addressing the subject according to the relevant local issue: decarbonisation, food waste, care of our common house, water as public good, integral ecology, climate change and agriculture, access to land, protection of biodiversity, sustainable and inclusive development of cities, importance of recycling, food security, civil society participation, education for sustainable development. 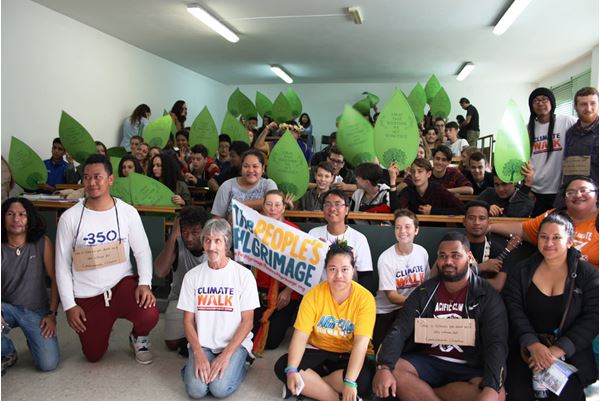 The initiative of the pilgrimage was enriched by the presence of several people who accompanied the group during the walk (students, freelances, university professors, hiking guides, representatives of civil society associations) guiding them on the way towards environmentally important places, both in a positive and negative meaning (oases, natural parks, trails, treatment plants, coal plants and landfills).

The pilgrims met many people along the way: who joined for a few kilometers, who offered a hot meal and a bed, who provided their house for a hot shower, who warmly welcomed the pilgrims at the entrance to the city. Each of those people, even if not physically, are symbolically walking with the pilgrims.

Crossing Italy by walking allowed the group to have several meetings, institutional and informal, but all with the same importance and the same common goal: to raise awareness that the issue of climate change is no stranger to the Italian population, that all of us in our daily lives suffer from the negative effects of the neglect with which we treat the planet, that in the human family we are all responsible for the care of our common home Earth.

The message spread during the pilgrimage has been clear: climate change is one of the greatest challenges that humanity is facing and it is necessary to act and do so quickly. The news about extreme weather events of the last months (among many, floods in Italy, the cyclone Patricia in Mexico and the effects of Nino in South America) and, most recently, on the terrorist attacks in Paris, accompanied the journey and reinforced the conviction that the initiative of the pilgrimage towards Paris were more than ever right and necessary.

Beyond the pure description of the purpose of the journey, the pilgrims spread the message in different ways:

• direct testimony of those who saw their homes destroyed because of the typhoon in the Philippines Hayan or those who are afraid of losing their lives because of rising water levels of the oceans (this is the case of the Pacific Climate Warriors, group of people coming from 10 different islands in the Pacific that reached the pilgrims in Assisi);
• silence of some pilgrims for a few days in order to symbolically give voice to all the victims of climate change, “physical victims” (the reference is not only to people but to all creatures, plants and animals that disappear every day because of climate change) but also “social victims” that are the residue of an unjust society that does not allow those who suffer from the effects of climate change to make their voices heard;
• handwriting of the Encyclical “Laudato Si”, a text that inspires the pilgrimage and that the group wants to present to world leaders in Paris trough a daily transcription on a small notebook;
• collection of local environmental instances: by visiting symbolic environmental places, local community representatives have described the issues related to the environment on their own territory that the pilgrims are planning to bring at Paris.
• interviews with local, national and international media.

Every step counts: this is not only the slogan of the pilgrimage but it is the deep message that the initiative aims to spread, that is the conviction that the walking and the direct contact with people is an effective awareness communication tool for the issue of climate change and peace. Every step counts and every human being counts: everyone must contribute to the promotion of a sustainable way of life, both in the individual activities of the daily lives and all together in asking to world leaders to sign serious agreement that stops climate change.

FOCSIV , honored to have promoted and organized the Italian pilgrimage “Una Terra. Una Famiglia Umana”, has decided to follow the pilgrimage until Paris, with one representative who will walk with the pilgrims up to the French capital. It is important to continue our commitment for environmental justice and, together with the various initiatives in which we are involved in with the Italian Climate Coalition, the pilgrimage is a fundamental opportunity of civil society mobilization that asks political leaders to be responsible towards the planet. As Yeb Sano likes to say: “It’s the moment to stop talking and start walking!”