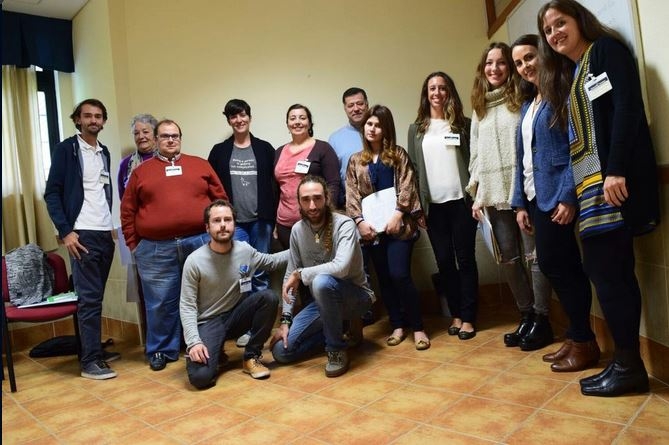 On October 24th, during the Annual Manos Unidas´ Training Meeting that took place in El Escorial, we had the chance to bring together our young supporters that are travelling to Paris under the CIDSE campaign “Change for the Planet – Care for the People” and under the mobilization actions towards COP21.

Each year during this Meeting more than 300 people of the 70 delegations from different Spanish cities come together. It is a weekend where we work and reflect on the contents of our institutional campaign, but at the same time, it is a place for sharing and learning experiences and information about different interesting topics. This year we had training sessions specifically dedicated to the 2030 Agenda for Sustainable Development, the “Change for the Planet – Care for the people” campaign and the upcoming COP21. This time our idea was also for our supporters going to Paris to interact with the whole organization during the weekend and also organize a special 4 hour workshop to allow for special training on climate change and optimize and facilitate their presence in Paris.

Our group is formed by 12 young people (19 to 48 years old) and they have been designated as “ambassadors” by their Delegations (Alicante, Barcelona, Cadiz, Castellon, Huesca, Las Palmas, Madrid, Murcia, Santiago and Valencia). Their mission is to come to Paris with the message and the compromise of sustainable ways of living in their cities, while showcasting some alternatives already existing there and also to mobilize for a just and ambitious climate agreement in Paris.

We all met for the first time during our workshop. Our supporters are all volunteers working for Manos Unidas, three of them have led their delegations in the past. Their profiles range from different fields: development cooperation, human rights, private sector, teachers, students, and even a photographer! But with common motivations to come to Paris: they want to be part of the construction of an active global social movement for climate justice, they want visibility for the people Manos Unidas works for -poor and vulnerable people from developing countries- and they also want to learn more about production and consumption sustainable alternatives in developing countries to be able to show them in their northern cities. They all aim for systemic change and transformation of our societies for a more just and equitable world.