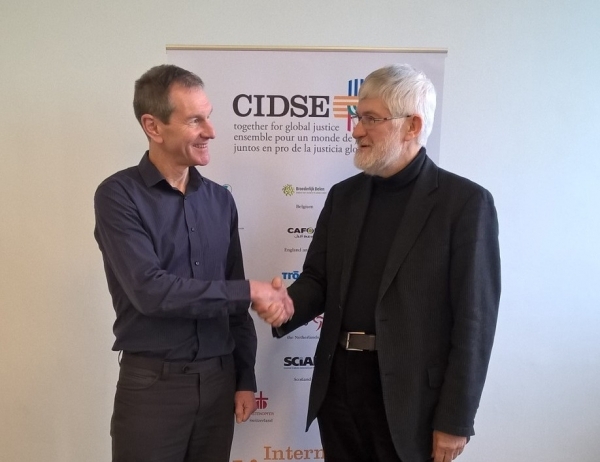 At the CIDSE board of Directors meeting ending today 50 years since the foundation of the network were celebrated, the new member Progressio was welcomed in the CIDSE family, and a new CIDSE strategic framework was approved.

CIDSE celebrates this year its 50th anniversary: for half a century, since its foundation in 1965 in the spirit of the Vatican II, it has been tackling poverty and was involved in struggles for global justice, human rights, democracy, peace and the environment. Today CIDSE is one of the largest development alliances and constantly undertakes joint advocacy with its members, mainly towards the United Nations and the European Union promoting climate justice, food security and stronger rules for the business and finance sector to ensure the respect of human rights.

The annual CIDSE Board of Directors meeting also endorsed a new CIDSE strategic framework, which sets CIDSE’s direction for the next six years. We will work towards serving the poor and promoting justice by harnessing the power of global solidarity. With our new strategy we will pursue more and more an economic and societal transition promoting just and sustainable alternatives to end systemic injustice and destruction of nature. Building strong alliances and movements are deemed essential to make sure that people’s voices get heard and that governments deliver on the commitments they made in international agreements such as the Paris Agreement on climate change and the 2030 Agenda for Sustainable Development. We will still be guided and inspired in our work by Pope Francis’ Encyclical Laudato Si’ and by his urgent call to address environmental and social injustice.

The CIDSE network gains further strength today by welcoming the British Catholic agency Progressio as its 18th member. CIDSE President Heinz Hoedl said: “CIDSE is happy to welcome Progressio, a lay organisation rooted in Catholic Social Thinking, within its family. We believe that Progressio’s people powered development approach, inspired by the values of respecting dignity, standing in solidarity, and acting boldly, will reinforce CIDSE quest for global justice and transformative change. ” Mark Lister, Progressio Chief Executive, said: “We are eager to work alongside CIDSE’s member organisations: and we are looking forward to the collaboration and the exchange with many like-minded development agencies and partners coming together to support poor and marginalised people to empower themselves so they can live with dignity, fulfil their rights and overcome poverty.”

The entry of Progressio will reinforce CIDSE’s presence in the United Kingdom, where CIDSE is already present with CAFOD (England and Wales) and SCIAF (Scotland).
—
Contact
Valentina Pavarotti, Media & Communication Officer pavarotti@cidse.org, +32 2 282 40 73

Notes to the editors:
• CIDSE is an international family of Catholic social justice organizations, working together to promote justice, harness the power of global solidarity and create transformational change to end poverty and inequalities. We do this by challenging systemic injustice and inequity as well as destruction of nature. We believe in a world where every human being has the right to live in dignity www.cidse.org