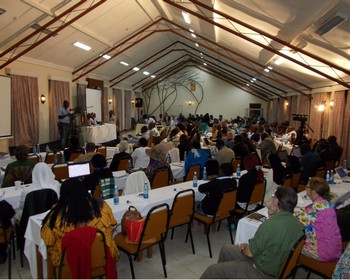 In 2015, CIDSE contributed to the organisation of a Pan-African Conference on Land Grabbing and Just Governance in Kenya, together with Africa Europe Faith and Justice Network (AEFJN), its American counterpart (AFJN) and the Symposium of Episcopal Conferences of Africa and Madagascar (SECAM). The event took place in Kenya from 22 to 26 November and gathered over 100 participants.

The conference highlighted the state of land grabbing in Africa, with the presentation of case studies of resistance across the continent, as well as Church responses and its increasing engagement in the issue of land grabbing. It also aimed at developing strategies to support and strengthen local communities in their struggles to stop this threat to food security and build resilience.

The conference concluded with the adoption of a joint statement and a commitment of a plan of action.

(see below pdf versions of both documents available in EN – FR. Portuguese versions to follow shortly.)

We, the participants of the Nairobi conference on “land grabbing and just governance in Africa” coming from over 100 organisations from different faith traditions and civil society groups in Africa, Europe and Americas, met in Limuru (Kenya) from the 22nd to 26th of November 2015. This conference took place a few days ahead of the visit of Pope Francis, and we all feel supported and mobilized by his bold stance against land grabbing when he warned that “For them (indigenous communities), land is not a commodity, but rather a gift from God and from their ancestors who rest there, a sacred space with which they need to interact if they are to maintain their identity and values. When they remain on their land, they themselves care for it best. Nevertheless, in various parts of the world, pressure is being put on them to abandon their homelands to make room for [industrial] agricultural or mining projects which are undertaken without regard for the degradation of nature and culture.”[1].

We recognize that land grabbing – as well as the structural issues that are tied to it – and just governance commit us to walk together from grassroots to global level. From an African perspective land is something sacred and we believe that an important part of any future success in our fight against land grabbing lies in our ability to build deep connections with our land.

We reclaimed the narratives around land issues from the biblical and African traditional spirituality of the land and from actual cases of land violations.

We oppose land grabbing of investors, traditional leaders and governments talking on behalf of the people and assuming that everybody has something to win from land grabbing and its subsequent investments.

As Africa is the main target of land grabbing worldwide, our main concerns gravitate around the scourge of land grabbing and its impact on food sovereignty and the sovereignty of African states. It has come to our attention that foreign multinationals are the major catalysts of this shameful mass acquisition of prime farmlands that is on course of ripping Africa and its future generations of its livelihoods and identity. Most of the land handed out to them is being used to produce goods for export, mainly non-food goods such as minerals and raw (agricultural) materials for foreign industries as well as to develop infrastructure. We are also aware that locals, governments and financial institutions play an important role in this phenomenon.

Currently many public policies and frameworks developed by African governments and major powers – such as the G8 and international institutions like the World Bank, the International Monetary Fund, the World Trade Organisation and the World Economic Forum – facilitate directly or indirectly massive land acquisitions which are exploiting earth resources and land in an unsustainable way.

The dominant narrative by land grabbers on how to cope with the main challenges of our time – climate change, poverty, food security – is flawed.

Throughout the conference we had the opportunity to build, step by step what our vision of a society of life in abundance looks like. We are indeed seeking for frameworks that allow:

• Communities to keep or regain access, control and ownership over their land and other natural resources in order to feed their families, their communities and eventually, to feed the world
• The right to food and to water to be fully realized as an indivisible part of human rights
• local community-owned and driven investments to flourish
• Communities to invest other levels of the food chain (stocks, processing, distribution, …) in their own countries
• An increase in resilience of rural communities avoiding rural exodus and forceful and inhumane evictions
• Gender equality and provides opportunities to youth
• Communities’ right to protect their identity and cultural heritage

While we also recognize the need to assess our responsibilities in this phenomenon as traditional spiritual chiefs, churches and leaders, we appeal to all decision makers, individuals and civil society organisations to make their best efforts in order to achieve this vision through organizing communities, awareness raising, non-violent mobilization as well as through any other available means.

We also appeal to decision makers to:

• Reinforce Africa’s autonomy on its own development and not to be subject to short-term profit driven foreign agenda led by international institutions, governments and multinationals working hand in hand
• Put communities, small scale food producers and women at the center of policies that impact them and to include them in the decision-making process
• Govern responsibly African land and resources so that future generations can enjoy the fruits of the earth
• Stop all forms of harmful massive land acquisition having a negative impact on food sovereignty, people livelihoods and the environment
• Fully support the work of the UN intergovernmental working group on a legally binding treaty on transnational corporations, business and human rights.
• Hold companies accountable for human rights violations, illicit financial flows out of Africa and any violation of labour and environmental laws

We want to highlight that many existing legal frameworks already include provisions that allow such recommendations to be met and that the first step is to strengthen their implementation.

While we appeal to different actors, we, participants of the Limuru (Kenya) conference, commit ourselves to work towards positive change of mindset. We have defined commitments that we will individually and collectively fulfil, with a strong conviction that together we shall win.[2]