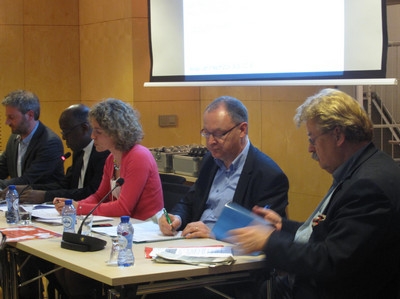 Abbot Léonard SANTEDI, Secretary General of the Congolese Bishops Conference, shared his experience from the ground where he witnesses that companies trading the concerned minerals can be complicit with abuses, even rape and death. In this context, a voluntary regulation would not be enough to improve the situation of populations living near mine areas. A study they undertook showed that the 2010 US Dodd Frank Act has spurred real changes by business actors of all nationalities towards responsible mineral sourcing; disproving claims it was the source of negative impacts. He recalled the vital moral stakes of the regulation.

“I come here with a cry of suffering from my people, but also a cry of hope. In Congo we have a proverb that says, ‘One single finger can’t peel a banana.’ Cleaning up trade in minerals must be a common fight of all: businesses, governments, civil society. In keeping with its values and respect for human dignity, the European Union has a duty of responsibility, and solidarity. Otherwise it’s the law of the jungle.”

Jan TYTGAT, Director EU Government Affairs Benelux at Umicore, presented Umicore’s risk management policies that consist of knowing the product, the supplier and the transaction. Depending on the risk, due diligence is increased, checked to OECD standards. This is being driven by consumers, in jewelry, in electronics. Large car manufacturers are asking about the origin of minerals, even without a legal framework. In his view, the risks for small companies are the same, though they might not have the same resources.

“A proposal that doesn’t refer to downstream can’t assure customers that phones don’t contain conflict gold. It cuts the problem in parts. Every week we receive questions from downstream customers on the conflict-free nature of our minerals. There’s a huge pressure from final customers for our due diligence.”

Frédéric TRIEST, Deputy Director of EurAc recalled that according to the European Commission’s figures, only 4% of the targeted companies implement the OECD standards under a voluntary regime. And 50% of SMEs responding to the Commission consultation were in favor of binding regulation. While the European Commission has made a step towards a binding regulation following the vote in the European Parliament, a regulation that wouldn’t target all companies placing the minerals on the EU market would not be effective.

“While Umicore and some other companies may be leaders in good practice, unless Member States agree on strong mandatory measures, dodgy businesses would still be allowed to continue to trade in murky waters.”

MEP Elmar BROK, President of the Foreign Affairs Committee of the European Parliament, recalled that stopping conflict minerals is important for the EU at home, for peace and security. As a politician, he looks for the best method to get there. He is concerned about downstream small and medium enterprises, their capacity to undertake due diligence and feasibility of control down to the mines, and continued willingness to source from the region. He is in favor of a binding regulation with limited scope that could find successful political consensus, trying to make it work and then possibly extending the scope, including to other minerals.

“A binding agreement with limited scope isn’t a full moral approach, but it can be a solution. I’ve been around long enough in business and seen too many ‘Volkswagens’ to know that the value of self-control is zero.”

Among the private sector representatives in the audience, views put forward were nuanced, expressing concerns about competitiveness and feasibility of enforcement, but also that downstream products and consumers would not be targeted by the regulation. Finally a worker representative took the floor, recalling that the most vulnerable in supply chains are the miners, and calling for more solidarity in global trade rules.