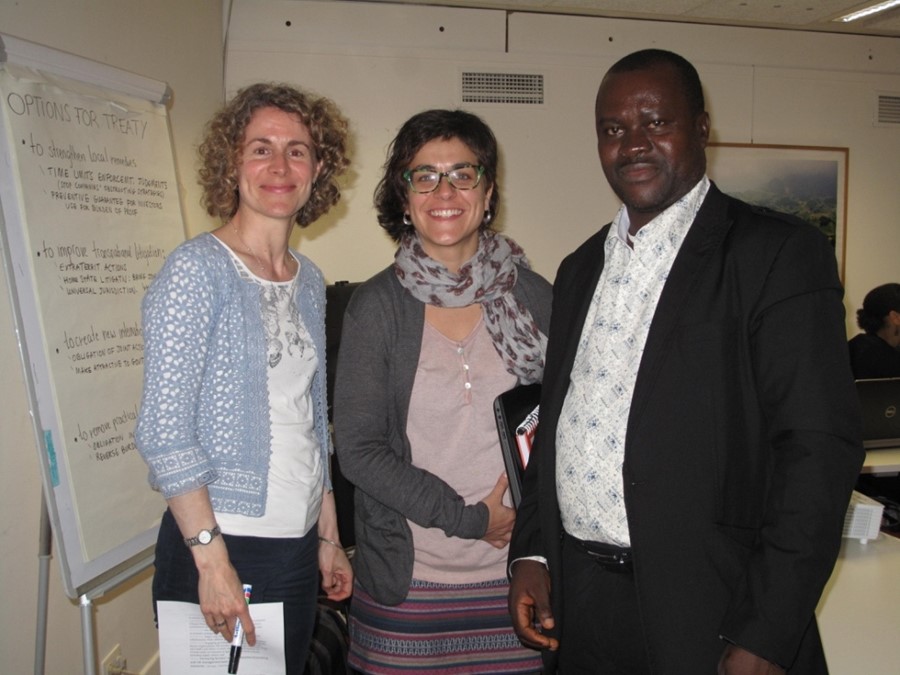 In May, CIDSE held a legal seminar on the Treaty in Brussels.

As members of the Treaty Alliance, a global movement working towards the Treaty, CIDSE, Friends of the Earth Europe, SOMO and Bread for the World co-organised a legal seminar to discuss options for enforcement mechanisms for the Treaty linked to access to justice.

The seminar brought together academics, NGOs, and members of grassroots organizations reporting cases of human rights violations by corporations in different continents. It also included an exchange with representatives of the EU institutions.

So far, while international law has defined the duties of states to protect human rights, it has not explored enough the responsibility of corporations for their human rights violations. A turning point has been reached on 25 June 2014, when the UN Human Rights Council in Geneva adopted a resolution on the elaboration of an international legally binding instrument on transnational corporations and other business enterprises with respect to human rights, also referred to as “UN Treaty”. The Treaty is a unique opportunity to tackle the many human rights violations being perpetrated by numerous corporations nowadays.

The UN Resolution called for the establishment of an Intergovernmental Working Group (IGWG) with the mandate to elaborate the Treaty. The legal seminar took place ahead of the 2nd IGWG session in October this year, and offered the occasion to reflect on issues such as the Treaty’s contribution to ensuring the primacy of human rights over corporations’ rights in the context of current discussions on trade and investment agreements.

During the seminar, stories were shared about human right abuses and the legal and practical barriers to access to justice encountered in different countries. The case reported by Elisabet Pèriz from Tierra Digna, a study centre for social justice based in Colombia, exposed the Hydroelectrical Dam Project El Quimbo, constructed and exploited by ENGESA, a Colombian subsidiary of Enel (Italian multinational manufacturer and distributor of electricity and gas). Likewise, Chima Williams, Head of Legal Resources of the Environmental Rights Action of Friends of the Earth Nigeria, illustrated two cases against Shell; one about gas flaring and the second over oil spills into farmlands and fishponds in Southern Nigeria.

These cases exemplified the challenges of transnational litigation and showed the inability of host states to enforce judgments, as well as the reluctance of home states to impose responsibility on parent corporations when, legally, this responsibility is expected to be shared by both, parents and subsidiaries. A UN Treaty could mean a major advancement in regulating extraterritorial obligations by establishing universal jurisdiction.

Moreover, companies often break environmental and social obligations regarding the impact on communities, but there is weak follow-up or enforcement carried out by the legal authorities. The cases above highlighted barriers for affected people to access to justice such as lack of information and resources, unreliable judicial systems, and the lack of enforcement and implementation when the cases are sentenced. All these elements act against the protection of rights holders, and in favor of private enterprises and their profit.

The seminar also highlighted that States are often vulnerable to legal attacks by transnational corporations that operate in their territories. Hence, questions arise on the relationship that the UN Treaty should have with Free Trade agreements and, especially in what concerns the Investor-state dispute settlement system (ISDS) in private courts, for example by requiring incorporation of human rights obligations in the latter.

Furthermore, legal actions against corporations are lengthy and expensive. In this regard, the Treaty could be a valuable instrument to help affected communities to face the challenges in foreign courts, but also to improve mutual legal assistance between host country where violations occur and the home country of the parent corporation so as to strengthen local justice systems.

CSOs are seeking ways for the Treaty to be people-centered, from allowing preventive measures such as the engagement of affected people in impact assessments, to defining companies responsibilities, direct and indirect obligations for companies, principles for corporate group liability, and ultimately, criminal liability for serious human rights violations.

It is clear that the Treaty alone cannot overcome all the limitations of access to justice for victims, or guarantee the proper enforcement of justice and the rule of law. Based upon serious consideration of different options, it can however create a global legal framework that improves the accountability of corporate actors for their involvement in human and environmental rights violations.