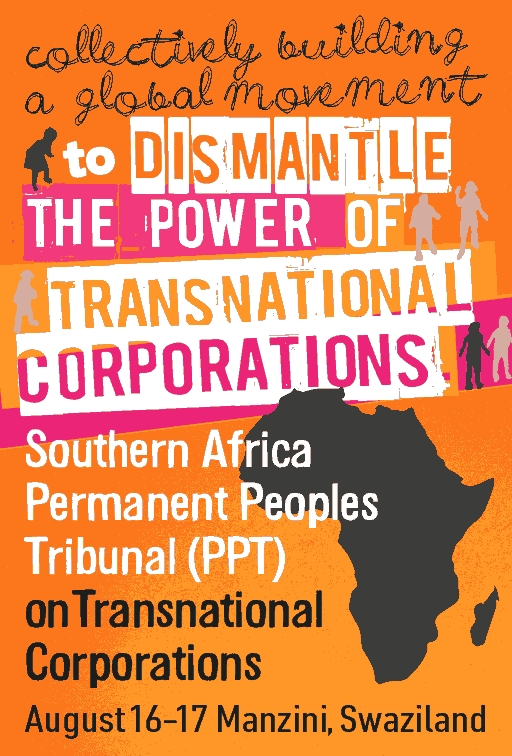 If you’re not there, it’s difficult to imagine the lives of the Zimbabwean women and children regularly sexually assaulted for protesting the mining activities at the Marange diamond fields.

Or the mine workers at Glencore’s coal mines in Mpumalanga, South Africa, continuously striking for a decent wage to feed their families a healthy (or at times any) supper. What adds to this distance is the fact that not only are these situations difficult to imagine, but most have not even been heard of, not only by the general public, but by other communities facing similar problems and CSO’s working with them.

This is the aim of the Southern Africa Permanent Peoples’ Tribunal on Transnational Corporations – to bring communities and CSO’s together in a single space where they can meet, give testimonies to the human rights violations they experience on a daily basis, learn from each other’s experiences, and of course, mobilise. They are, after all, fighting the same fight. The 1st session of the Tribunal took place in August this year in Manzini, during the annual SAPSN Peoples’ Summit.

The Tribunal was the first in a series of many to come, and was also the launch of the Southern Africa Campaign to Dismantle Corporate Power,the regional leg of a Global Campaign to Dismantle Corporate Power, Stop Corporate Impunity and Reclaim Peoples’ Sovereignty. While working closely with several regional partner organisations, the AIDC is playing the central coordinating role in the Campaign.

The Global Campaign strives to unite hundreds of struggles, campaigns, networks, movements and organizations that are fighting the different ways transnational corporations are negatively impacting human rights and the rights of nature in every corner of the planet.

Over two days, 500 people squeezed into the Caritas Centre hall to listen to nine communities present their cases. It was as if the same plot was being used to tell the stories, but the characters, locations, and villains had different names and committed acts of varying levels and types of violence and devastation. The inhumane impacts of the operations of these TNC’s was echoed by each presentation.

The Southern Africa Green Revolutionary Council presented a case on the environmental pollution and labour rights violations by Glencore’s coal mines in Mpumalanga, South Africa. The Amadiba Crisis Committee talked about Australian company MRC’s oppression of resistance and corrupt practices in the Eastern Cape. Zambian CSO, the Centre for Trade Policy and Development gave testimony on the environmental destruction by Glencore Mopani Copper mines, the Centre for Natural Resource Governance spoke of the Penhalonga gold mines. The Zimbabwean Environmental Lawyers association presented on the horrors of the Marange diamond fields and the Amalgamated Trade Unions of Swaziland coordinated the case on Chancellor House’s coal mines in Maloma.

It came as no surprise that the majority of presenters were women, and it was clear that women were at the forefront of several movements. In particular, the women of Somkhele and Fuleni talked of their struggle against two anthracite mines in their homes in northern Kwa Zulu Natal – one already opened and one yet to start operations. This case was coordinated by Women in Mining (WoMin), a CSO based in South Africa but working throughout the region

South African company Ibutho Coal is planning on beginning its mining operations in Fuleni, in rural northern Kwa-Zulu Natal. The proposed mine will directly affect at least 7 villages, impact more than 1 600 households and between 12 600 and 16 000 people.

As with so many corporations, the shareholders of Ibutho are unknown, and its website does not have the annual reports and financial statements as is required by law. However, they are reportedly linked to major Swiss commodities traders Glencore.

In nearby Somkhele is a rural area with a population of 180 000, and lies 17km from the Hluhluwe-iMfolozi Nature Reserve, the oldest proclaimed nature reserve in Africa, opened in 1895. The Tendele Mine started its coal mining operations in Somkhele, a rural area in northern KwaZulu-Natal with a total population of more than 180 000 people, in 2007. Human rights violations have been significant, especially in the last two years, as resistance has escalated against the mine and include: intimidation and harassment of activists by the police/security of the traditional authority in particular; grave exhumations which did not respect the required traditional rites and have disrupted the spirits of the dead and caused significant emotional disturbance to those who are living; forced relocations, with significant numbers of families impacted receiving no compensation at all; violations of the right to assemble as community meetings of those who are opposed to the mine are disrupted, and convenors are harassed and threatened; the right to information has also been violated many times over as community organisers search out information which is ‘public’ including the Tendele Mine licence to operate, information on the payment and use of Corporate Social Reponsibility (CSR) funds paid over to the Mpukunyoni Traditional Council.

Joining the community of Fuleni, SAGRC gave testimony on the way in which Glencore’s Graspan and it’s subsidiaty Shanduka’s Wonderfontein coal mines in Mpumalanga were guilty of forced removals, operating on agricultural land, pulluting the Olifants river and the air of neighbouiring communities leading to lung disease.

The women of the Amadiba Crisis Committe and those from WoMin met immediately after the first day’s session to mobilise to strengthen their struggles. Another example of this commonality arising was the unintentional occurrence that Glencore came up not once, but three times during separate testimonies.

So what happens now? There is no doubt that there is an urgent need for further sessions of the Tribunal. The next session is planned for May 2017 in Johannesburg. People have met, people have talked, people have begun to plan. There is enough information right now for the initiation of legal action against at least one TNC. The scene has been set. Now we act.

*See the jurors’ report at www.aidc.org.za