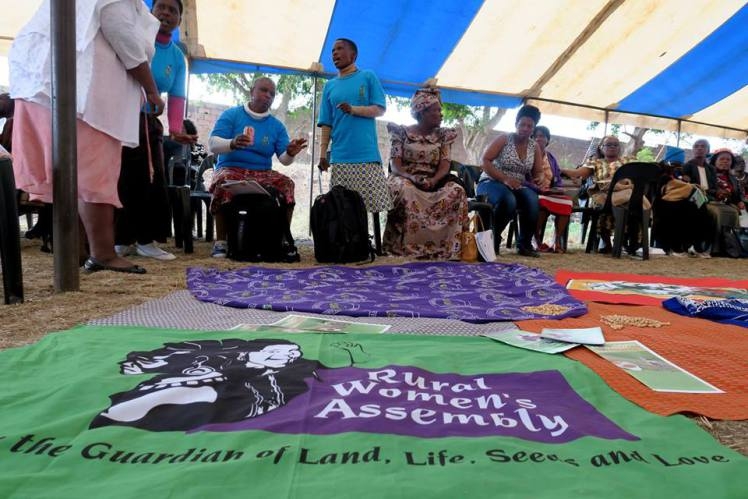 “There’s really no such thing as the ‘voiceless’. There are only the deliberately silenced or the preferably unheard.” (Arundhati Roy)

Close to 200 women from all over Southern Africa gathered in Manzini, Swaziland, recently for the Rural Women’s Assembly’s (RWA) People’s Summit that coincides with the annual SADC Heads of State Summit. They came from Lesotho, Zambia, Zimbabwe, South Africa, Botswana, Malawi, Namibia, Mozambique and the far-flung villages of Swaziland itself. They came with seeds, fabric, baskets, and craft. They came with stories of hardships and survival as well as voices that sang songs of resistance – against patriarchy – as well as songs of joy, of seeds, of land and love.

The RWA traveled to Swaziland this year as an act of solidarity with their sisters in the country. Although one of the largest chapters of the RWA with 20 000 members, the RWA in Swaziland has many challenges. Swaziland is an extremely poor country that is governed by a Monarch with near absolute powers. Women, and particularly rural women have very limited rights and very insecure access to land.

The three -day event brings together movements and activists and is held in parallel with the Southern African People’s Network (SAPSN) Summit. As such, the People’s Summit tries to speak directly to the themes of the SADC Heads of State and present people’s alternatives. This year, the official SADC Summit was happening during the worst drought experienced in the region. The severe drought conditions have already taken their toll on agricultural production. Small-scale farmers and producers, especially have been most affected by the drought.

Despite the severe drought and its impact on food in the region, the 2016 theme of the SADC Heads of State Summit was “Resource Mobilisation for Investment in Sustainable Energy Infrastructure for an Inclusive SADC Industrialisation and for the Prosperity of the Region” which in our view was simply not speaking to the challenges that the region faces.

Hence the RWA decided to organise side events that allowed us to speak to the real concerns of poor, marginalised rural women producers and farmers. In our view this was certainly not a moment for more investment in an industrialisation model that was not only impacting directly on the environment and the commons but also continued to drive a model of extractivism that made the region “price takers” and completely locked into the logic of “dig up the minerals and ship it out.”

The RWA organised three main events that focused on women and seed policy, women and land and the Farmer Input Subsidy Programme (FISP) in the region. A seminar on seed policy focused on the sharing of traditional seeds. One farmer from Zambia, Mary Sakala, zoomed in on the value and benefits of indigenous seeds for women and the communities in which they live. She explained why hybrid seeds sold by multinational corporations were not beneficial to people’s health and livelihoods. She said that multinational corporations and governments both benefitted from the monopolies granted on seed production and distribution. She called for the rejection of these hybrid seeds and promoted the use of indigenous seeds.

The RWA also rejected the policies that aimed to control small farmer-managed seed saving systems and the proposals by governments to introduce and formalize plant breeders’ rights. In fact the RWA called for the opening of borders for seed sharing and the protection of traditional and indigenous seeds from MNCs .

In a speak-out on women and land, women lamented on the fact that there was very little investment in the lot of women to build decent livelihoods, tap their resources and facilitate the unleashing of their potential. Insecure tenure attenuates this general situation. In addition to not having secure tenure of land, women have limited or no access to agricultural infrastructure including land rights, appropriate farming technology, farm inputs, credit, extension services and training. Women also have limited access to basic physical infrastructure such as good roads, water, and electricity which are necessary for effective participation in the economic life of their communities.

In Southern Africa, as in many parts of the world, women’s rights to land and property are systematically denied. Even where liberal constitutions and laws give women rights, discriminatory attitudes and practices undermine such formal rights. This leaves many women almost entirely dependent on the men in their lives for basic economic survival and vulnerable to violence, poverty, and food insecurity, particularly if widowed, divorced, single, or in marriages not formally recognised.

One of the woman farmers from Zimbabwe, Theresa told her story: “Today I am a widow without a land permit. When my husband passed away my in-laws told me to pack my things and get off the land and out of my house. They said it was their son’s land. I moved back to my elderly parents. Here I worked with them to till the land and I built a five -roomed house from bricks which I made with my own hands. For a while everything was fine. Then my parents died. My brother came and he told me to leave the house that I built and get off the land. I refused but my brother threatened me and was extremely violent. He hung me upside down from a tree. I took the case to the chief who told my brother to beat me off the land. It was only when I went to one of members of the RWA for advice that things started to change. The women rallied with me to challenge my brother and they helped me to claim my rights.”

For the past six years, women have come to value the parallel People’s Summit as a space where social movements, labour unions, churches, youth, NGOs, small associations and activists can deliberate on the socio-economic, political and ecological challenges that confront the peoples’ of the region. The People’s Summit also creates conditions for activists to spend time together, sharing, learning, articulating their issues and building a common platform of resistance to challenge the policy decisions and development path that the leaders of the SADC countries take. Our approach was to ensure that climate justice was and not treated as a stand-alone issue during the SADC summit given the impact of drought on the livelihoods of the women farmers in the region and particularly in Swaziland.

Hence the main call that the RWA made to the Heads of State was to say that farmers, especially rural women who are the main producers of food for the households, demand urgent redress in relation to climate. The RWA also emphasised that it regarded the SADC Governments’ Regional Appeal to close the funding gap in Southern Africa of $2.4bn as much too “moderate and patient”. Africa, and particularly the rural women are not the drivers of the climate crisis, small scale farmers were not the emitters of GHG, yet they are the ones most affected by the changes in weather and climate conditions.

RWA proposed that the SADC government develop a longer-term approach to drought, floods and climate adaptation. An approach is needed to tackle the root causes of vulnerability and not simply the short crises. This must aim at building the resilience of small-scale agriculture. The region will continue to be badly hit by these crises, unless governments are serious about investing in smallholder agriculture, particularly women, as contained in the Malabo Declaration. This approach requires direct support and resources to small- scale agriculture immediately.

Mercia Andrews is the Director of the Trust for Community Outreach and Education and is actively involved in the Rural Women’s Assembly.