CIDSE at COP22 in Marrakech – CIDSE
Skip to content 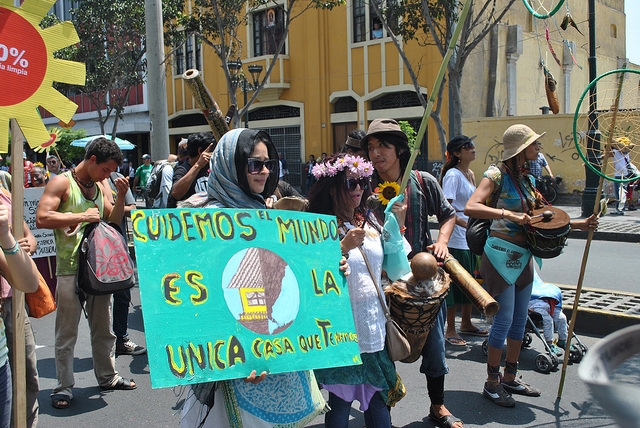 CIDSE continued to advocate for climate justice and greater ambitions to tackle climate change within the framework of the Paris Agreement and its entry into force this November ahead of the 22nd Conference of the Parties of the United Nations Convention on Climate Change (COP22), in Marrakech.

COP22 this year was held in Marrakech, Morocco, from 7 to 18 November. After the early entry into force of the Paris Agreement on 4 November, COP22 focused on increasing national and international efforts and ambitions in mitigation, adaptation and implementation measures, while consolidating commitments to keep temperatures under the established 1.5 degree threshold.

CIDSE was present in Marrakech with a small delegation formed by policy officers from member organisations such as CAFOD, CCFD-Terre Solidaire, Cordaid, Development & Peace, DKA/KOO and Misereor.

• Tuesday, 15 November: Understanding Agriculture in relation to Industrial Food Systems, Compensation and Food Security, co-hosted with CCFD-Terre Solidaire and Action Against Hunger (ACF). The event took place inside the Blue Zone on 15 November (3-4:30 pm – Room Bering) and counted with a range of high-level speakers from IPES-FOOD, the head of delegation of Bolivia and Carbon Market Watch. (See programme in attachment below)

• Thursday, 17 November: Solutions for sustainable food systems in a time of climate change, held inside the Green Zone from 1-2:30pm.

• Despite early entry into force of the Paris Agreement, there is still much to be done. Global temperature records are being shattered each month and we are closer than ever before to the 1.5 degrees’ threshold. COP22 must stimulate higher ambitions and commitments in emission reductions, determined and planned mitigation and adaptation measures, including loss and damage, in particular, for the most vulnerable communities already suffering the effects of climate change.

• The Paris Agreement formulates a mandate for all governments to respect, protect, promote and fulfill human rights for all in all climate related actions. COP22 should further clarify how human rights obligations will be integrated, guaranteed and respected in the operationalization of the Paris Agreement.

• Climate Finance: Ahead of COP22, developed countries launched the “100 bn roadmap”, yet bolder commitments need to be taken to ensure a significant increase in adaptation finance to help developing countries meet their adaptation needs and transform their economies to stay on a low-carbon pathway. Greater transparency and detailed reporting will also be crucial issues for tracking both public and private flows in order to ensure that climate finance doesn’t come at the expense of development assistance, which funds education, health and poverty reduction.

• Agriculture was bound to be a major point at COP22. The Paris Agreement holds the promise of safeguarding food security and eradicating hunger. Yet climate change has major effects on food systems, and in turn, our current dominant food system contributes highly to the worsening effects of climate change. The Parties should further clarify how policy efforts could be directed to tackling climate change impacts on food security and how land and agriculture can best contribute to meeting the objectives of the agreement, having in mind that agriculture is a source of livelihoods and income, nutrition and health, and the foundation of identities across communities all over the world.

CIDSE believes that people hold the key to change and the power to enhance a just transition towards a more sustainable world where people and planet come first.

• CIDSE participated in the Climate March in solidarity with Moroccan Civil Society on 13 November to demonstrate our profound commitment and make sure our voices were heard by global leaders.

• On 14 November, CIDSE and the Global Catholic Climate Movement held a joint webinar ‘Live from COP22: Hot Climate News and What’s Next for Catholics‘, to learn about the highlights of the negotiations and initiatives carried out by citizens around the world.

• Following the efforts made at COP21 in supporting a strong mobilisation, the campaign ‘Change for the Planet – Care for the people’ continued to promote people’s voices and solutions to climate change.

Through a video series ‘Stories of Change: Sustainable food for the people and the planet’, the campaign aims to contribute to positive change by highlighting alternatives that exist and work, examples of how small changes at both the individual and collective levels can make a big difference. The campaign also accompanied COP22 developments through its Facebook and Twitter channels.