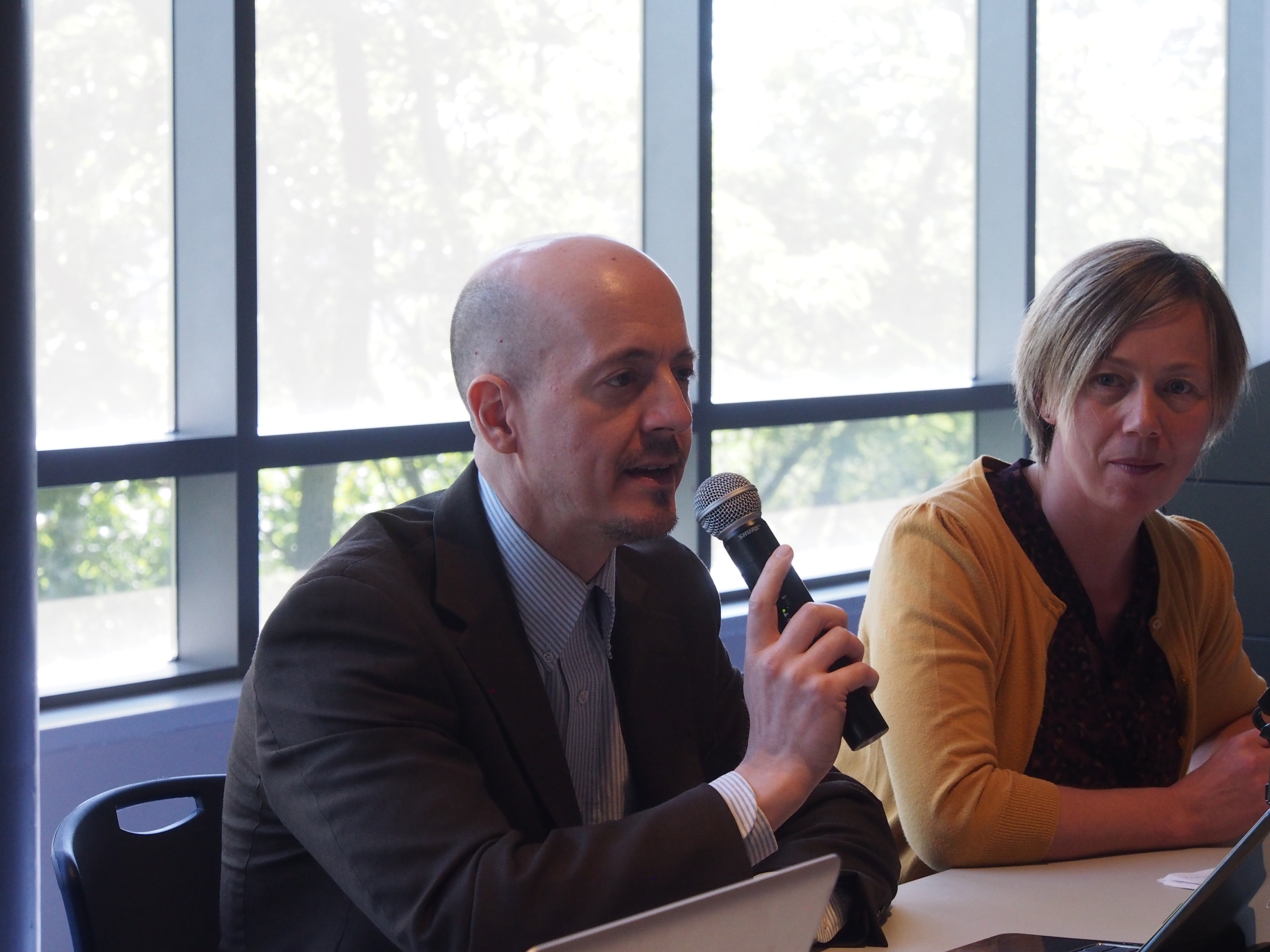 -How have you been involved in CIDSE’s work within the Post-2015 process?
I have been involved as the convener of the CIDSE’s Resources For Development Working Group, and we followed the process of the financing for development conference and also the financial aspects of the Post-2015 agenda itself. I was also member of the sustainable development core group at CIDSE, where we shared intelligence and strategies to figure out how to best approach the agenda.

-Which were the main obstacles encountered in the Post-2015 process?
One of the main obstacles was in terms of making the means of implementation available for the agenda. It was a much tougher environment that I had ever seen when negotiating to have international cooperative action by developed countries to support the agenda, and this is connected partly to the financial crisis. Many countries are still going through the impacts of that crisis in terms of the austerity programs, the cuts… this had affected the budget for overseas aid. It imposed strong constraints and a sort of ideological backlash. Things that were more acceptable earlier in terms of the multilateral discussions on finance, sovereignty mechanism, debts relief, responsible lending and borrowing…we encountered a strong opposition to many of those things.
Another obstacle was the lack of international leadership. Governments were too concentrated on their own domestic situations and constituencies. This gap was filled by the Pope in 2015. The Laudato Si’ coming out a few months before the conference in September (United Nations Sustainable Development Summit) gave a strong momentum to civil society voices that had been pushing for an ambitious agreement. I don’t think that it was so ambitious in the end, and I don’t agree with all the SDGs, but several of them are well crafted and have a good level of ambition, and I am not sure that it would have happened in the same way without the influence of the Pope, who helped shape opinion in the USA which is a strong player in these negotiations. The voice of the Pope was also an important factor to change minds regarding the Paris agreement.
The third obstacle was the strong lobbying by the private sector and the penetration that the private sector has had in several public policy apparatuses in several countries. It’s a mix of lobbying and secret penetration. And it was unnecessary because in many cases the opinion were already internalized in public policy among policy makers. This created some difficulties: we are not against the private sector having a role in the implementation of the agenda, but it has to be accompanied by frameworks for accountability and for regulation because the private sector’s interests are not aligned with the interests of the global common good as we wanted the agenda to focus on. That alignment requires state’s intervention, state regulation. The private sector neutralized that sort of balancing aspect that we thought needed to be part of the agenda. The influence of the private sector is reflected in solutions that are very biased towards the private sector and private sector financing. There is a more limited role for public policy than had been the case previously. And this is reflected in the agenda 2030 outcome.

-What were the main achievements of the CIDSE’s engagement in the Post-2015 process?
One achievement has to do with CIDSE’s visibility in the process. CIDSE was the coordinator of civil society in the FFD process. This is a role that CIDSE had not played before. CIDSE had always been in a leadership position, but this time it was more than that, it was a real coordination role of civil society intervention. CIDSE was recognized as a leader in terms of shaping the agenda. We were able to come up with key papers and briefings in key moments of the process and that was registered in the outcomes. There are questions like the follow-up to FFD, the structure of the document, the importance of CBDR, where CIDSE’s voice was critical at turning moments of the negotiations to put those issues on the agenda. I definitely do not think that would have been the case without CIDSE’s intervention and leadership.
Also there was an impact in terms of the galvanizing of the civil society voice, which we have seen in levels that we had not seen in previous conferences, the role that CIDSE played as a coordinator had a lot to do with that galvanizing of the civil society. There were several well coordinated interventions by civil society at different moments when drafts of the document were coming out, there were comprehensive responses, which showed the intellectual resources of the CSO community and also the capacity to act efficiently and effectively.
In terms also of the financing aspect of the agenda 2030 and the means of implementation, also the outreach and the collaboration and the developing of links and trust was important; CIDSE coordinated the work of NGOs working on finance and built bridges.
The input in the 2015 process was also a critical role, because otherwise the input of the financial aspects of means of implementation would have been a lot less well articulated. Some of those impacts were reflected in the outcome, we had the MDG A which was the goal that spoke about international cooperation and finance in the MDG era, now you do have a much more developed means of implementation, the SDG 17. That is partly a sign of the intervention of civil society to shape the agenda and learn from the mistake of the past in the MDG project.

-What were the strongest points of the CIDSE strategy?
There are human resources aspects: CIDSE did rely on the expertise of all its members in a cooperative way. It’s about CIDSE’s internal ways of working, we are a community where people know and trust each other, and that enabled us to have an impact as a whole that was greater than the sum of the parts. We had a good ability to work together and to take best advantage of the intellectual resources of the members. We were not competing with each other as CIDSE members, we were all contributing as we could, and the environment was very friendly and conducive. CIDSE has an environment of consensus building and of cooperative work among the members.
There was also the powerful Jean Saldanha who had charisma and the ability to work with very different constituencies, reach across and build bridges with them. She was a very important factor. Not many people would have been able to play the role that she played because of her particular talents as an organizer and of someone capable of building that community, building trust and gaining the respect.
Building consensus outwards was also important for CIDSE within its strategy, the fact of not going alone but building alliances, rather than coming up with alone CIDSE positions being the enablers for bigger communities coming together and forming common positions. That in the end had more impact. We are faith-based but we could work in a number of different communities, not all of them faith-based. In the end we were more seen as a technical expert group than on a faith-based group. If we had played more the faith card it would have been more difficult to gain the respect and play the role of facilitators that we played.

-What were the most remarkable moments of the Post-2015 journey that CIDSE embarked in?
In the drafting session of May of last year (2015) on financing for development we clearly saw the influence of our position on the what some countries were saying, how they sort of woke up to the importance of the follow up process, which became one of the few gains that actually were secured in the FFD conference. It was critical that CIDSE had institutional memory and was able to explain to people what had been the long term strategy in the FFD process. We saw all of a sudden a very visible impact that we were having on countries.
The other turning point was when the report from the open WG on sustainable development goals came, following a process that you wouldn’t have in the normal assembly, and I don’t think that the goals would have been as ambitious as they are if they had followed the process. Countries realized that they had to protect that outcome, not let the process of the general assembly, in the face of the big pressure, reduce the number of the goals. People like Bill Gates were making fun and ironising, being sarcastic about the number of goals, and in the face of all those pressures, it was good that many countries decided to support the process of the open WG and not change it, which would have probably been bad for the quality of the goals that we ended up having.

-How did the engagement in this process change CIDSE?
In CIDSE we had the sustainable development core group and we saw that the interrelation of the advocacy among the goals helped us. I think that seeing the relationship among our different agendas was a catalyzing point for what has become now a motto in the new Strategic Framework, which is about changing lifestyle. This is also partly linked to the owning up to Laudato Si’, but I think that there is this important aspect in how we approach now the elements of our advocacy, now that we are letting that play out in the development of our strategic plan and in the way the working groups will be refashioned: a new way of working that tries to overcome the silos of the past. It’s not the first time that we talk about integration and overcoming silos, but I think that the advocacy in this process and the information to which we were exposed, and also the need to show big commitments we are advocating, has put us now in a position in which we are much more serious about those commitments than I had ever seen in the past in CIDSE. This has changed in the way we partner with many others that we have perhaps partnered with before; this has made us much more accessible and open.