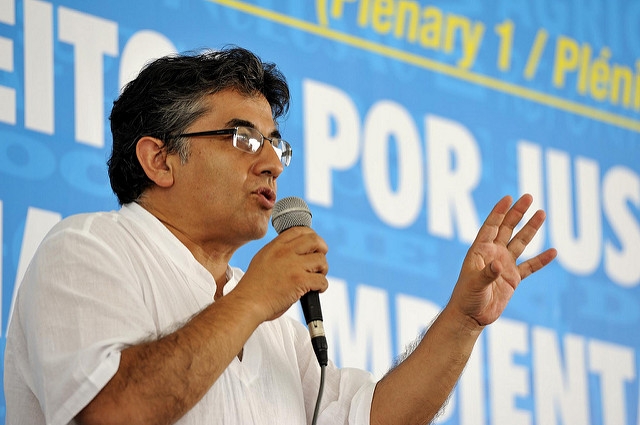 CIDSE calls on the Bolivian government to withdraw its accusations

The accusations levelled against Pablo Solón and Rafael Archondo appear to be a direct attempt to silence their critical voices against the hydroelectrical dam project of Chepete and El Bala in the Bolivian Amazon region. Both are facing accusations from the Bolivian government regarding their former functions as ambassadors of Bolivia to the UN, more than six years ago. Pablo Solon is accused of illegally appointing Rafael Archondo to replace him as UN ambassador. Rafael Archondo is accused of illegally prolonging his term of office, and both are facing four years in prison.

Pablo Solon was the former Executive Director of Focus on the Global South (2012-2015), and he is currently the director of the Fundación Solón, founded in La Paz in 1994 to promote the work and spirit of the Bolivian artist Walter Solón Romero (1923-1999), who was committed to issues related to the protection of water, climate change, energy, trade agreements and systemic alternatives. In this spirit, Pablo Solón has fiercely opposed the construction of the mega-dams of Chepete and El Bala, pointing to the limitations of the extractivist economic development model.

In our views, the Bolivian Government’s accusations against Pablo Solón and Rafael Archondo are attempts to silence them in their struggle for alternative development models that respect the right of the earth and communities. CIDSE, the international family of 18 Catholic social justice organisations, is committed to the common struggle for social justice and ecological transformation, as also envisioned in the Encyclical letter of Pope Francis, Laudato Si’.

We call on the Bolivian government to withdraw its accusations against Pablo Solón and Rafael Archondo and to ensure the conditions for a democratic debate on the major development projects of the country, in accordance with the Bolivian Constitution.