“Energy to Change”: online launch and offline screenings around the world – CIDSE
Skip to content 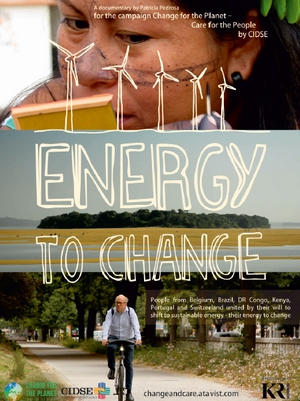 The way people produce and access energy is a crucial aspect of our lives, because energy is essential to our well-being, and simultaneously we must avert climate change to save life on earth. The documentary ‘Energy to Change’ follows six stories of the personal energy choices of communities and people across the world. From riding bicycles to defending the Amazon from hydropower dams, from schools and clinics in the desert powered by solar panels to energetic conversion of buildings, these heroes are doing their part for an energy transition that respects the needs of people and the planet.

After our special premiere in Katowice (Poland) during COP24 in December 2018, the documentary “Energy to change” is ready to be screened in Belgium and in other parts of the world. We decided to do the online launch of our documentary linked to a special date “International Mother Earth Day” (22nd April) and in the Easter week. With this second documentary, the campaign launched by CIDSE “Change for the Planet – Care for the People” aims to bring to light the power that people have and the role they can play in bringing about meaningful changes towards more sustainable and fair societies. People are putting into place concrete alternatives, and communities are struggling to take back control of energy projects that affect them. Compiled into this documentary, these examples aim to inspire citizens to take action, grow more conscious, and use their resourcefulness.

A QUICK LOOK AT THE SIX STORIES

When this couple decided to have children, they wanted to continue living in a community. They found a co-housing project, and now share a flat with 15 people. The shared spaces and the energy efficient design of the housing unit reduces their energy consumption.

The people of the village of Kanyab wanted electricity and saw the water generators in neighboring villages. The pooled their money together and found some outside funding. The villagers dug the canals for the generator and put the parts together with their own hands.

This church in Antwerp recognised that faith-based communities must live their values by example. That’s why their church is outfitted with solar panels, water collection on the roof to use in the bathroom, and outside plugs for charging electric bicycles.

Access to electricity can make the difference between life and death. Lucia lost one of her children because the local clinic had no electricity at night. The nurses are proud now that their clinic has solar panels allowing them to filter water, keep medicines cool, and light the clinic at night.

After Francisco got involved in environmental activism in the 80s, it was hard for him not to practice those principles in his daily life. Francisco takes the train and is using shared bicycles. He’s made energy efficient improvements to his home, including geothermal heating and double-glazed windows.

Alessandra and her people feel a spiritual duty to protect the Tapajos river in the Amazon that provides them with life. The people are fighting the 41 hydroelectric dams on the river, which have destroyed their sacred sites. Her village uses a solar panel to try to show their government that there is an alternative to damming the river.

The “Energy to Change” documentary is also available with subtitles in DE – ES – FR – IT – NL – PT.

If you are interested in supporting the promotion of the documentary or organising a public screening, please contact Giorgio Gotra (gotra(at)cidse.org).

Watch the full trailer below: