Four Years of Impunity After Dam Collapse in Brumadinho

On the occasion of the fourth anniversary of the dam collapse in Brumadinho, CIDSE, ECCHR, RENSER, MISEREOR, AVABRUM and COMECE want to commemorate all those who have been affected by this tragedy. At a time when there are negotiations at both the European and international levels to oblige companies to respect human rights and the environment – as well as to increase access to justice for victims of corporate abuses – this tragic event serves as a warning about the damage that can be caused by a system that puts corporate profits above people and planet. Furthermore, it demonstrates the need to integrate the demands and concerns of communities negatively affected by corporate activities into the existing legislative process to enact a European due diligence law.

The Brumadinho dam collapse represents a systematic failure in the coordination between the mine operator chain, state supervision and privatized control by certifying companies to guarantee safety and environmental standards. The case highlights the need for legislators to oblige companies to identify and address such risks. We wonder, could this crime have been prevented if a German or EU supply chain law had been in place earlier? What can be done to ensure that such a new EU law contains no loopholes and does everything possible to prevent such crimes from happening?

These and other questions regarding the situation of the affected people and communities, as well as the difficulties people face who fight against impunity, will be discussed by: 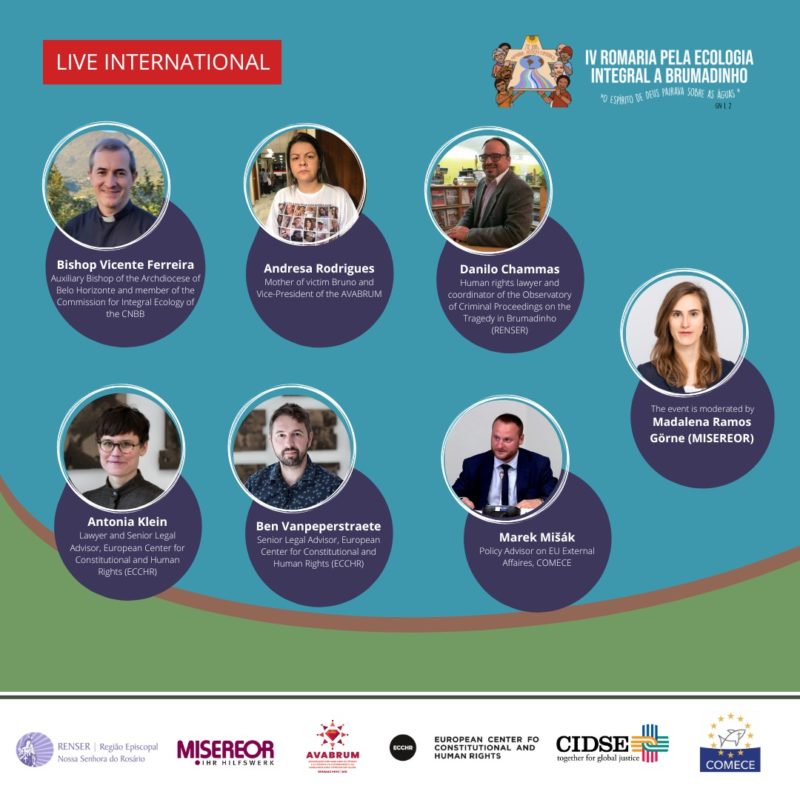 BACKGROUND
Vale collapsed, killing 272 people and releasing toxic sludge into the environment. Only four months earlier, the Brazilian subsidiary of the German certifier TÜV SÜD certified that the dam was safe, despite known high safety risks. Three families still await the rescue and identification of the remains of their loved ones. Traditional communities that depend on the river and the land for fishing, farming and culture continue to this day to be affected by violations of their rights to use these common goods.
On 15 October 2019, together with ECCHR and MISEREOR, five Brazilian citizens, who are relatives of the victims, filed a criminal complaint against the certifier TÜV SÜD and one of its employees in Germany. The Munich Public Prosecutor’s Office is currently conducting its investigations in order to clarify the potential criminal responsibility of German actors for the dam failure.
In Brazil, the criminal proceedings against 11 Vale S.A. employees, five employees of TÜV SÜD and two companies were invalidated in December 2022 by the Brazilian Federal Supreme Court, which determined that the lawsuit was being processed in an incorrect jurisdiction. As a result, the criminal proceedings concerning the 272 homicides and several environmental crimes are closed. A significant amount of evidence obtained during the investigation stage remains valid and may provide grounds for the Federal Public Prosecutor’s Office to reopen the criminal case.
Thus far, impunity prevails for the mining company Vale, the German certifier TÜV SUD, along with their respective agents, as not a single person has yet been tried.