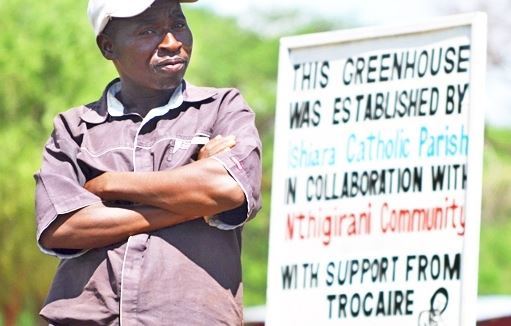 It seems fitting that world leaders gather in Rio de Janeiro this week to discuss the future of our planet, including the unresolved issue of climate change, shortly after marking of the 100th anniversary of the sinking of the Titanic.

There are many similarities between our approach to the changing climate and the fateful trans-Atlantic journey one hundred years ago. Both involve the needless drift towards preventable disaster. Likewise, both involve the utterly avoidable deaths of very many people.

Perhaps the most fitting similarity, however, is the fate of the poorest passengers on both journeys. The Titanic passengers in steerage, many of them Irish, made up the majority of people on board the doomed ship. When the icy water breached the Titanic, it was these passengers who faced it first. Three quarters of those in steerage died.

As the world edges closer to irreversible climate disaster we are faced with a similar scenario: the poorest people left on the frontline facing the fatal consequences of a disaster not of their making.

Across Africa, Asia and Latin America, hundreds of millions of people are struggling to adapt to their changing climate. In the last three years we have seen 10 million people displaced by floods in Pakistan, 13 million people face hunger in east Africa, and over 10 million in the Sahel region of Africa face starvation.

Even those figures, stark as they are, only scrape the surface. According to the Global Humanitarian Forum that was headed up by former UN Secretary General Secretary Kofi Annan, climate change is responsible for 300,000 deaths a year and affects 300m people annually. Economic losses due to climate change amount to more than $125bn each year. By 2030, the annual death toll related to climate change is expected to rise to 500,000, while the annual economic cost is projected to rocket to $600bn.

The gradual and devastating impact of climate change can be seen in the millions of forgotten villages scattered throughout the developing world.

Trócaire has this week launched the results of a two-year long research project into the effects of climate change on rural communities in the developing world. The research paints a picture of communities battling food insecurity and plagued by migration, conflict and health issues all as a result of climate change.

In the Tharaka district of central Kenya, for example, annual rainfall has decreased by over 15 per cent since the 1970s and now stands at between 500-800mm. Rain has also become more erratic and less predictable. During the same time, the average temperature has increased by one degree celsius.

The result of this is thoroughly depressing. Without steady and predictable rainfall, fields remain barren. Crops fail, animals die and people starve.

Fifty years ago, the average household in Tharaka owned twenty cattle and fifty goats. Today, that has been reduced to two cattle and five goats. Sixty-five per cent of Tharaka’s 130,098 people are now classified as living in absolute poverty.

People in Tharaka are trying to adapt but it is not easy. To buy drought-resistant seeds and irrigation equipment, they need money. Yet, as crops fail and animals die, they are becoming poorer all the time. They are locked in a downward cycle and they are rightly anxious about where this is leading them.

As one farmer in Tharaka told me last year: “we used to know when the rains would come but now it is so unpredictable. Most of the time it does not come at all. When we should have rain, we instead have clear blue sky. How can we grow food? How can we live?”

That is a question being asked in villages throughout the developing world. In Africa alone, it is projected that by 2020 between 75 and 250 million people will face increased water stress as a result of climate change and in some countries agricultural yields could fall by up to 50 per cent.

The Rio de Janeiro conference will deal with many issues but at a minimum it must give urgent momentum to tackling climate change. Ireland, as one of the world’s highest per capita polluters, has an obligation to bring this charade to a close. Our government remains committed to introducing a domestic climate change bill and should do so as soon as possible. As we attempt to rebuild our international reputation, Ireland has a chance to show new leadership and integrity on an issue which poses a very real threat to the future of our planet.

We are heading towards a global mean temperature increase of about 3.5 degrees Celsius by 2100 compared to 1990 levels. This will affect us all, although the impact will depend on people’s ability to respond. Communities such as those in Tharaka, quite simply, cannot cope without significant outside help.

The developed world is better placed to respond to climate change but remains vulnerable. Storms, fires, floods, heat-waves and hurricanes will continue to increase in frequency, destroying land, killing people and costing economies billions. Failing to act comes at a price and that price is destruction and death all over the world.

Because that is the thing about being on the Titanic – it doesn’t matter whether you’re in steerage or first class, when the iceberg hits, we’re all going down.

by Justin Kilcullen, Director of CIDSE’s Irish member organisation Trócaire. This article was published in The Irish Times on June 20th, 2012.