A tax on financial transactions is on its way, but who will benefit from its revenues? – CIDSE
Skip to content 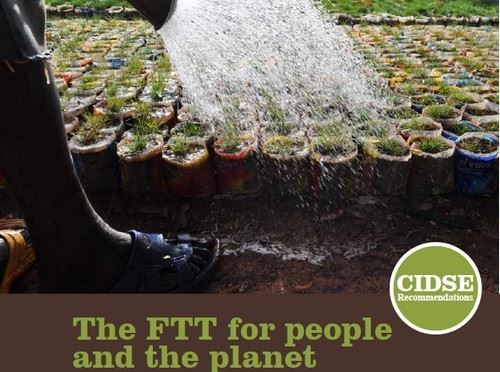 Originally conceived to support the poorest, there is a real risk that FTT revenues will be used for future financial sector bail-outs.

The European Commission (EC) has given 11 EU member states the green light to implement a Financial Transaction Tax (FTT), showing that the EU has no intention to be hostage of the financial sector’s vested interests. However, now that the tax is finally on its way, the question is whether it will benefit those it was originally meant for, the poorest, or whether it will end up plugging leaky national budgets or filling a bailout fund for banks and financial institutions.

Nine months ago the EC proposed a low EU-wide tax – 0.1 percent on share and bond trades, 0.01 percent on other transactions – which was expected to bring in around Eur 57 billion a year. Now that a group of 11 accounting for two-thirds of Europe’s economy, including France, Germany and Italy, go ahead, revenue from the tax is likely to be substantial.

Apart from raising large sums of money the tax is also designed to limit excessive financial speculation and stabilise financial markets. Putting the money aside in a bailout fund for a future financial crash would incentivise the kind of irresponsible behaviour the tax means to curb. That would be like telling a child not to jump down the stairs yet placing a mattress at the bottom to break its fall.

Instead of using its revenues as a cushion for financial institutions engaging in risky financial behaviour it should be used to address the poverty and inequality issues it was originally conceived for.

We might have to refresh the memories of our politicians a little on this point. Back in the early 1970s American economist James Tobin was the founding father of a tax on foreign exchange transactions, aimed at reducing speculation in international currency markets, which he saw as dangerous and unproductive. It was firmly established on the political agenda thanks to the efforts of NGOs and development experts. Governments in Canada and France issued studies and inquiries into the tax.

In the heady days of the new millennium, NGOs lobbied hard for the currency transactions tax to be one of the pillars of financing a new era of development. In 2005 the Belgian government laid down the necessary legislation for such a tax to be used to meet development objectives. In the same year, France and Spain joined Brazil and Chile in stressing the need for innovative finance for development in their ‘Action against Hunger and Poverty’.

With the onset of the financial crisis in 2008, political attention for the FTT increased rapidly.  Championed by Germany and France, the G20 commissioned the IMF to look into the FTT as one way for the financial sector to pay for the damage they caused. At the same time preoccupation with the crisis has also diluted attention for the development dimension of the FTT.

After nearly three decades of development activists and experts’ effort for FTTs  it would be diabolical to deny FTT revenues the potential of contributing to a better future of millions of poor men, women and children and instead use them to secure the future of the same actors largely responsible for the crisis we find ourselves in today.