Mobilising the youth: discussing with Janelle Delorme on the World Social Forum. – CIDSE
Skip to content 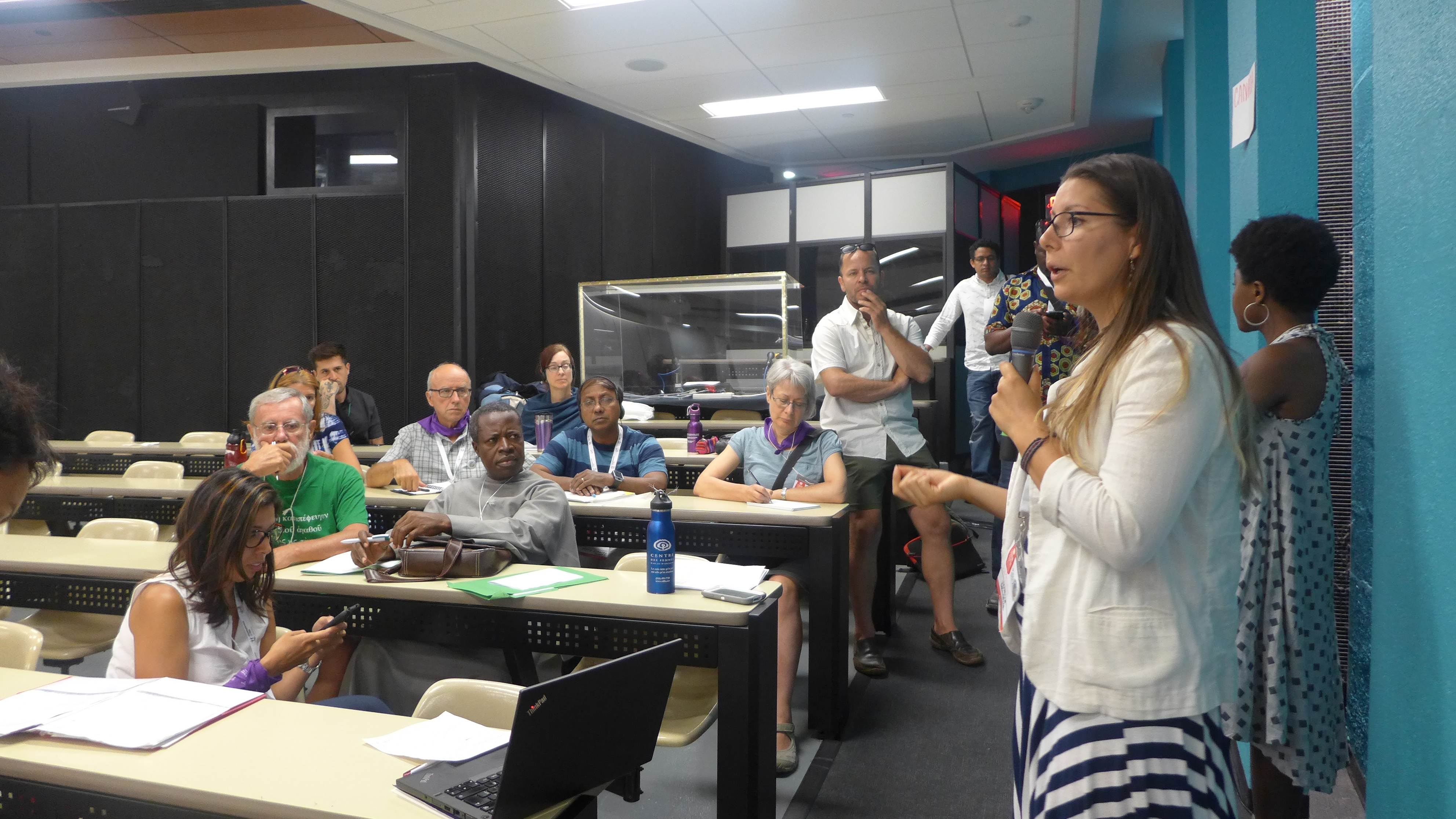 Janelle Delorme, who started engaging in activism with Development & Peace since the young age of 12, is now a Regional animator for the region of Manitoba. She supports members in getting campaigns out in the parishes, educating the Canadians on different social justice issues that Development & Peace’ partners from the global South are dealing with. At the World Social Forum, during the workshop “Climate Change: Continuing mobilization after Paris” she talked about youth mobilization in Canada.

How did your engagement in activism with Development & Peace start?
I started as a very young youth, at 12 years old. Through different games and activities organized by Development & Peace I learned about the different social justice issues that people in the global South were dealing with; Nike and Levi’s were at the forefront and were criticized for the fact that they were exploiting children in sweatshops. At the time I was 12 years old and what really hit me was being told that there were actually 12 years old that sawed your shoes. […] That really awakened me to the fact that in the global North we live in a very rich society […] I have to recognize the fact that I have an enormous privilege as a Canadian citizen.

What was the relevance of the “Youth Space” at the World Social Forum?
The forum allows a voice and a space for youth, this is important because often our voice is lost in a sea of older people; having the youth space at the World Social Forum also allows for youth who may have felt that they don’t have a voice that they can go back to their regions in Canada, go back to their home country, and educate others. In this way they can really know that they can change the world, and it can be through small actions and it can be through big actions, it doesn’t necessarily mean that you have to change the entire world, but you might change just the world around you.

What is the World Social Forum for you?
The WSF for me is an opportunity to gather with like-minded people to talk about different social justice issues, to bring to the forefront issues that are not discussed in mainstream media; it also allows us to share ideas. When I went to RIO +20 and I went to the people’s summit I was so inspired by the struggle of the Latin American people and how they mobilized, how they got their communities organized. And so I think these forms allow for cross-contamination, to learn from each other, and allow the opportunity to get a wakeup call, of learning about issued that we might not even have heard of.

Can the World Social forum space contribute to global change?
I think the WSF might be a catalyst for some people. Alternative spaces are hard to come by and we need to have that alternative voice compared to the mainstream media. I think we want a “major impact now”, we live in a society where we want change and we want it now, and what we want at the World Social Forum is system change, and I believe system change will take time. For this you need dedications, you need volunteers, you need organizations that are willing to give that time and bring these new ideas to the forefront. It took a really long time for example in South Africa for people to be aware of the apartheid and to dismantle it. The same happened here in Canada with the First Nation communities and the Inuit communities that were impacted by the residential school system. It has been years and years that people have been outspoken about it, but only with the Truth and Reconciliation Commission have we started learning the legacy of the churches and of the governments, and the impact it has had on the indigenous communities in Canada. So I think we have to allow time for change. And change happens in many incremental steps, we might not even see it from day to day and then all of a sudden the change has happened.

What are the specificities of the World Social Forum taking place in Canada?
I think that the WSF being in a Northern country as in Canada has its advantages and disadvantages. It has its advantages because it demonstrates that in Canada there are also many social justice issues that we have to deal with, especially with the indigenous community, and among other issues are the students’ struggles, the austerity. I think that the World Social Forum being here allows for that to come to the forefront. Unfortunately, especially with so many visas being refused, the participation from people from the global South…I wish it had been higher. Maybe financially coming to Canada was a barrier, but as we can see by the numbers it hasn’t been as well attended as previous World Social Forums.