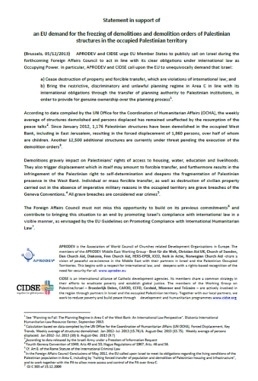 The forced displacement of Palestinians has been and continues to be a central IHL/IHRL issue in the Palestine-Israel conflict, not only in the West Bank but in Gaza and Israel as well.

In the West Bank (including East Jerusalem), since January 2012, 1,176 Palestinian structures have been demolished, resulting in the forced displacement of 1,860 people. Another 12,500 additional demolition orders are still pending. These demolitions mainly take place because the structures lack permits under the Israeli-imposed planning system, under which 94% of Palestinian permit applications are rejected, while the expansion of illegal Israeli settlements in occupied territory is facilitated.

In Gaza, thousands of people remain internally displaced as a result of their homes having been destroyed or damaged in Operation Pillar of Cloud (2012), Operation Cast Lead (2008/9), as well as other Israeli military operations dating back to 2000. Major obstacles to a durable solution include the closure of Gaza, which has impeded the entry of reconstruction materials, as well as ongoing military operations in the border areas (known as the ‘buffer zone’, which comprises 35% of Gaza’s arable land, and where close to 1000 homes were razed in military operations prior to the 2005 disengagement).

Within Israel, developments over the past few years have also given rise to serious concerns over the forced displacement of the Bedouin population in the Negev Desert, who are citizens of the State. Around 75000 Bedouins live in 35 unrecognized villages which either predate the State or were created by military order in the 1950s. As the State does not recognize these villages, building permits cannot be issued there, and basic public services (e.g. water, electricity or sewage) are not provided. The Prawer-Begin Bill – now under discussion in the Knesset – is presented as a development plan for the Bedouin, but was developed without meaningful consultation of communities, and puts at least 30 – 40 000 inhabitants of unrecognized villages at risk of having their homes demolished and being forced to move. This process is already in motion on the ground, as demolitions are ongoing. The options for most displaced Bedouin are to move to one of the few recognized villages (many of which also do not receive services), or to seven existing government-planned Bedouin towns, which are among the poorest in the country. According to an alternative plan developed by community representatives and professional planners,  it would be possible to recognize all 35 villages in their current location if the same planning criteria were applied to the unrecognized Bedouin villages as to the Jewish rural sector. The European Parliament has expressed concern over the Prawer Plan and called for its withdrawal.

On 25–29 November 2013, CIDSE and APRODEV organized a Brussels advocacy mission with partner organization Adalah Legal Centre for Arab Minority Rights in Israel, as well as APRODEV member Diakonia IHL Resource Centre, to draw EU officials’ attention to the realities and the policies underlying forced displacement in both the occupied Palestinian territory and Israel. Itay Epshtain presented Diakonia’s latest report, “Planning to Fail”, which highlights the illegality of the West Bank planning system under international humanitarian law. Nadia Ben Youssef of Adalah presented updates on the progress of the Prawer-Begin Bill, as well as the organization’s findings regarding parallels in displacement policies on both sides of the Green Line.

Read:
– CIDSE’s factsheet on international legal standards in forced displacements
– APRODEV & CIDSE statement calling on the EU to push for an end to demolitions in the West Bank
– Adalah’s information on the Prawer-Begin Bill
– Adalah’s position paper on forced displacement on both sides of the Green Line
– OCHA 2010 report on destruction in the Gaza buffer zone