Financing for sustainable development: Can the international financial system make the leap? – CIDSE
Skip to content 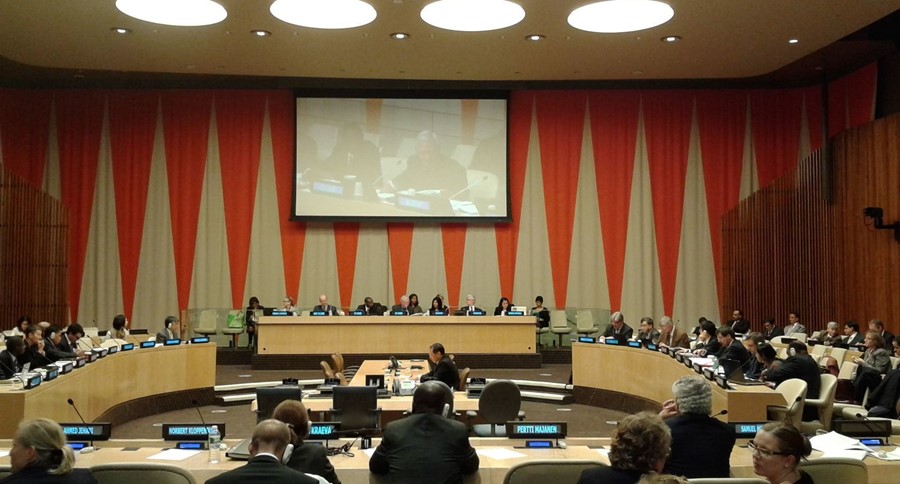 The Open Working Group on Sustainable Development Goals may still be pondering the number and nature of the new goals. However, the question of which issues are “goalable” is already on everybody’s minds. The panel discussion that CIDSE co-organised with Righting Finance, Global Policy Forum and Third World Network on December 9 during the 6th session of the Open Working Group on Sustainable Development Goals reflected this trend. Titled “Financing for sustainable development: Can the international financial system make the leap?” the panel discussed the place that the critically needed reforms should have in the overall post-2015 agenda.

Aldo Caliari from CIDSE’s US member organisation Center of Concern quoted Pope Francis’ exhortation Evangelii Gaudium:  “Money must serve not rule!” and underlined the moral imperative of this reform. In his presentation Mr Caliari presented the different areas of the financial system that have been identified by the civil society “Finance and Trade Cluster” as most urgently needing reforms. These include financial regulation – to reverse a situation of increased weight of finance in the real economy – as well as  reform of the monetary system, international cooperation on tax matters and an independent sovereign debt workout mechanism to provide responses to the re-emerging problem of debt. He emphasised the Finance and Trade cluster’s decision that a “Plan of action” would be a more appropriate means to forward this agenda rather than trying to capture it in goals. Given that the Rio+20-meeting of 2012 decided to have a limited number of easily understandable goals for sustainable development, an attempt to turn this agenda into goals risks a compartmentalized, partial and, thus, ineffective approach to the economic reform agenda.

Barbara Adams, speaking on behalf of the Global Policy Forum, pointed out that “we can’t have goals for everything we do. But if we don’t have a goal we don’t do it.” She pointed out that it has proven to be very difficult to realise commitments without goals. Rather than dismissing goals for their inability to deliver, it would be important to set criteria to determine what would make goals legitimate. Referring to the draft resolution on the International Partnership Facility, she pointed out that the rushed effort to redefine partnerships to revolve around Transnational Corporations is a lesson in how things should not be done.

Panelist Dr. Yanuar Nugroho, a member of the drafting team of the Indonesian President for the High Level Panel on the post-2015 agenda, also echoed concerns about the “righteous purpose of development” being lost in the current discussion. He emphasised that an important aspect of the agenda should be to safeguard access to development resources for public services and to guard against the “commodification” of public services.

Nerea Craviatto, the fourth speaker on the panel representing AWID, highlighted the need for accountability to be adequately addressed in the new framework. She called for a framework that would be oriented to “restructuring relations in a democratic way.”

The discussion that ensued revolved around the necessity for adequate attention to be paid to the means of implementation. Questions were also raised whether we should be overly concerned about the Open Working Group’s exercise in proposing a set of goals. Chee Yoke Ling from Third World Network asked: “Why are we putting ourselves in a box of goals?” Recalling the Rio principles and Agenda 21, she highlighted that we already have a valuable set of international commitments which we should not turn our back on.

To conclude, moderator Jean Saldanha from CIDSE emphasised that this discussion was an important one to be had at this stage of the process: “We need to lay bare the risks of rushing into decisions without adequately weighing the merits and risks of each option,” she said.