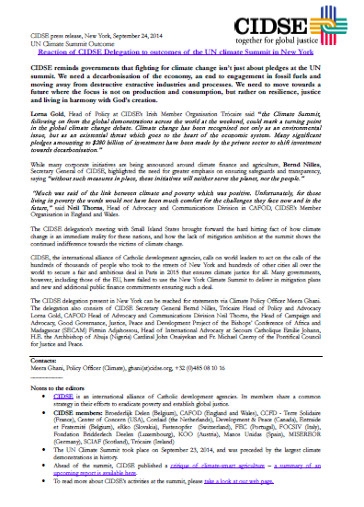 CIDSE reminds governments that fighting for climate change isn’t just about pledges at the UN summit. We need a decarbonisation of the economy, an end to engagement in fossil fuels and moving away from destructive extractive industries and processes. We need to move towards a future where the focus is not on production and consumption, but rather on resilience, justice and living in harmony with God’s creation.

Lorna Gold, Head of Policy and Advocacy at CIDSE’s Irish Member Organisation Trócaire said “the Climate Summit, following on from the global demonstrations across the world at the weekend, could mark a turning point in the global climate change debate. Climate change has been recognised not only as an environmental issue, but as an existential threat which goes to the heart of the economic system. Many significant pledges amounting to $280 billion of investment have been made by the private sector to shift investment towards decarbonisation.”

While many corporate initiatives are being announced around climate finance and agriculture, Bernd Nilles, Secretary General of CIDSE, highlighted the need for greater emphasis on ensuring safeguards and transparency, saying “without such measures in place, these initiatives will neither serve the planet, nor the people.”

“Much was said of the link between climate and poverty which was positive. Unfortunately, for those living in poverty the words would not have been much comfort for the challenges they face now and in the future,” said Neil Thorns, Head of Advocacy and Communications Division in CAFOD, CIDSE’s Member Organisation in England and Wales.

The CIDSE delegation’s meeting with Small Island States brought forward the hard hitting fact of how climate change is an immediate reality for these nations, and how the lack of mitigation ambition at the summit shows the continued indifference towards the victims of climate change.

CIDSE, the international alliance of Catholic development agencies, calls on world leaders to act on the calls of the hundreds of thousands of people who took to the streets of New York and hundreds of other cities all over the world to secure a fair and ambitious deal in Paris in 2015 that ensures climate justice for all. Many governments, however, including those of the EU, have failed to use the New York Climate Summit to deliver in mitigation plans and new and additional public finance commitments ensuring such a deal.

The UN Climate Summit took place on September 23, 2014, and was preceded by the largest climate demonstrations in history.

Ahead of the summit, CIDSE published a critique of the Global Alliance for Climate-Smart Agriculture.