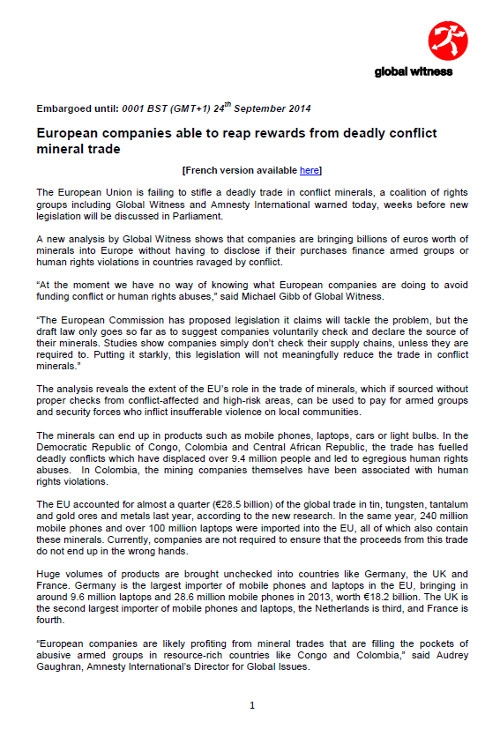 Today, a coalition of NGOs campaigning on conflict minerals supported by CIDSE launched a new website.

The European Union is failing to stifle a deadly trade in conflict minerals, a coalition of rights groups including Global Witness and Amnesty International warned today, weeks before new legislation will be discussed in Parliament.

A new analysis by Global Witness shows that companies are bringing billions of euros worth of minerals into Europe without having to disclose if their purchases finance armed groups or human rights violations in countries ravaged by conflict.

“At the moment we have no way of knowing what European companies are doing to avoid funding conflict or human rights abuses,” said Michael Gibb of Global Witness.

“The European Commission has proposed legislation it claims will tackle the problem, but the draft law only goes so far as to suggest companies voluntarily check and declare the source of their minerals. Studies show companies simply don’t check their supply chains, unless they are required to. Putting it starkly, this legislation will not meaningfully reduce the trade in conflict minerals.”

The analysis reveals the extent of the EU’s role in the trade of minerals, which if sourced without proper checks from conflict-affected and high-risk areas, can be used to pay for armed groups and security forces who inflict insufferable violence on local communities.

The minerals can end up in products such as mobile phones, laptops, cars or light bulbs. In the Democratic Republic of Congo, Colombia and Central African Republic, the trade has fuelled deadly conflicts which have displaced over 9.4 million people and led to egregious human rights abuses. In Colombia, the mining companies themselves have been associated with human rights violations.

The EU accounted for almost a quarter (€28.5 billion) of the global trade in tin, tungsten, tantalum and gold ores and metals last year, according to the new research. In the same year, 240 million mobile phones and over 100 million laptops were imported into the EU, all of which also contain these minerals. Currently, companies are not required to ensure that the proceeds from this trade do not end up in the wrong hands. 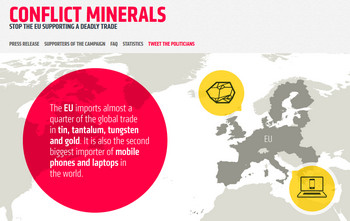 “European companies are likely profiting from mineral trades that are filling the pockets of abusive armed groups in resource-rich countries like Congo and Colombia,” said Audrey Gaughran, Amnesty International’s Director for Global Issues.

“The EU needs to come up with a meaningful law that effectively tackles the link between European trade and violent human rights abuses overseas. Responsible sourcing of minerals should not be optional, but something every business does.”

The U.S. and a dozen central African countries have measures in place requiring companies to investigate their mineral supply chains, but the EU has none. As the global demand for natural resources increases, the EU is at risk of becoming a major conflict minerals trading hub.
The new analysis is revealed as the NGO coalition publicly calls on MEPs and EU Member States to overhaul the proposed law and create something that will give consumers confidence that their purchases do not contribute to harm overseas. Supporters, such as Blood Diamond director, Ed Zwick, have backed the campaign.

Specifically, the coalition is calling for:
•    The voluntary proposal to be replaced by binding requirements, compelling European companies to source minerals responsibly.
•    The proposal to cover more companies. The current scheme targets only a paltry 0.05% of Europe-based companies involved in the trade. It doesn’t currently cover companies that import consumer goods, such as laptops, mobile phones and cars, which contain the minerals in question.
•    The proposal to include other natural resources at risk of funding armed groups or abusive security forces or linked to serious human rights abuses, such as diamonds, coal and chromite.

MEPs and Member States have a responsibility to ensure that companies in Europe do not profit at the expense of local communities in producing countries. They should give consumers that assurance through robust, meaningful legislation. This is a landmark opportunity to get this right.

Gautier Muhindo Misonia, coordinator of the Centre for Research and Investigation into the Environment, Democracy and Human Rights, in DRC, said: “We urgently need a strong law in the EU which stops companies ignoring the harms their purchases fuel in countries like the Congo. The artisanal mining sector in the Congo faces huge challenges. Armed groups and military control mines and trading routes. Labour conditions can be very poor. But international scrutiny of the sector has triggered real progress which the EU’s voluntary scheme would undermine. It would allow European companies to profit at the expense of local people.”

Baroness Helena Kennedy QC, said: “It is vitally important that the EU and the UK pass binding legislation requiring companies to adhere to human rights standards. Currently too many of our corporations are sourcing minerals through supply chains that are actually underwriting conflicts across Africa, enabling wholesale rape and murder. This is a campaign which urgently needs our support.”

Ed Zwick, director of Blood Diamond, and member of Global Witness’ advisory board, has backed the campaign. He said: “In Europe, our manufacturers purchase minerals that could be funding the conflicts our aid money hopes to alleviate. And all the while, we risk buying products containing these conflict minerals, blithely unaware of the implications… This is a landmark opportunity to help put this right.”

Prof. John Ruggie, the author of the UN Guiding Principles on Business and Human Rights, stated the following in a letter to Commission President Barroso: “[The Guiding Principles] make clear that those companies whose operations or operating contexts pose risks of severe human rights impacts should report formally on how they address them. Where minerals or metals mined in conflict situations through forced labor, child labor and similarly abusive practices may be part of a company’s value chain, this naturally becomes a relevant issue for formal reporting…A move to make reporting entirely optional risks leaving the most responsible companies exposed while those least attentive to their human rights responsibilities continue their current practices undeterred.”

The table shows the top five importers of laptops and mobile phones into the EU. Both these products contain tin, tantalum, tungsten, and gold. Currently, it is impossible for consumers to tell whether the minerals contained in these products have funded conflict and human rights abuses overseas.

All data from UN Comtrade: http://comtrade.un.org/

Data on tin, tantalum, tungsten and gold ores, concentrates, and metals captures EU trade in the HS codes listed in the table on p.78 of the Commission’s Impact Assessment, available at: http://trade.ec.europa.eu/doclib/docs/2014/march/tradoc_152229.pdf