Press release: Church leaders call for EU rules on conflict resources to be binding and consistent – CIDSE
Skip to content 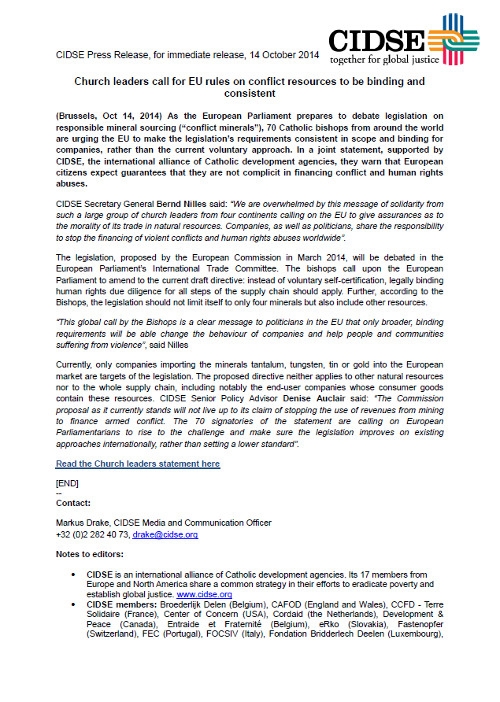 As the European Parliament prepares to debate legislation on responsible mineral sourcing (“conflict minerals”), 70 Catholic bishops from around the world are urging the EU to make the legislation’s requirements consistent in scope and binding for companies, rather than the current voluntary approach.

In a joint statement, supported by CIDSE, the international alliance of Catholic development agencies, they warn that European citizens expect guarantees that they are not complicit in financing conflict and human rights abuses.

CIDSE Secretary General Bernd Nilles said: “We are overwhelmed by this message of solidarity from such a large group of church leaders from four continents calling on the EU to give assurances as to the morality of its trade in natural resources. Companies, as well as politicians, share the responsibility to stop the financing of violent conflicts and human rights abuses worldwide”.

The legislation, proposed by the European Commission in March 2014, will be debated in the European Parliament’s International Trade Committee. The bishops call upon the European Parliament to amend to the current draft directive: instead of voluntary self-certification, legally binding human rights due diligence for all steps of the supply chain should apply. Further, according to the Bishops, the legislation should not limit itself to only four minerals but also include other resources.

“This global call by the Bishops is a clear message to politicians in the EU that only broader, binding requirements will be able change the behaviour of companies and help people and communities suffering from violence”, said Nilles

Currently, only companies importing the minerals tantalum, tungsten, tin or gold into the European market are targets of the legislation. The proposed directive neither applies to other natural resources nor to the whole supply chain, including notably the end-user companies whose consumer goods contain these resources. CIDSE Senior Policy Advisor Denise Auclair said: “The Commission proposal as it currently stands will not live up to its claim of stopping the use of revenues from mining to finance armed conflict. The 70 signatories of the statement are calling on European Parliamentarians to rise to the challenge and make sure the legislation improves on existing approaches internationally, rather than setting a lower standard”.