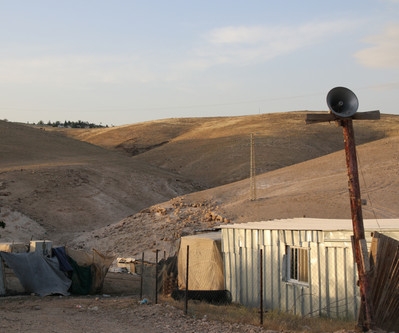 The Israeli Civil Administration has signalled advancements to forcibly transfer the entire Palestinian Bedouin community of Khan al Ahmar, located in the central West Bank, east of Jerusalem. The forcible transfer of the village would constitute a war crime under the Fourth Geneva Convention and it would set a precedent to dozens of other Palestinian communities facing similar risks.

The Palestinian Bedouin community of Khan al Ahmar is one of the 46 Bedouin communities in the central West Bank that are at high risk of forcible transfer; Israel plans to relocate their residents to specified relocation sites. The village is home to 21 families including 146 people, out of which 85 are minors. Many of its houses have been donated by the EU, and most villagers live in what looks more like makeshift shelters. Like most Bedouin communities in the West Bank, the village is not recognised by the state of Israel and thus is not connected to the main electricity grid or water supply.

Khan al Ahmar is located on land that Israel has earmarked for expansion of the illegal Israeli settlements near Ma’ale Adumim, located in the West Bank near Jerusalem. The villagers have lived under a demolition threat for months. Demolition orders distributed by Israeli authorities affect nearly all the community’s structures, including the tyre school funded by Italy and international support including a small donation from the Vatican, which serves 170 students in the area.

It appears now that Israel is advancing its plan to forcibly transfer the villagers.

Israeli Defence Minister Avigdor Lieberman told the press in the end of August that the defence ministry is “preparing for the evacuation of Palestinian communities built without authorization”, and that the ministry is preparing to evacuate the villages of Khan al Ahmar and Susiya within a few months.

On Wednesday 13th of September, the representatives of the Israeli military and the Civil Administration came to Khan al-Ahmar and notified the villagers that their only remaining option would be to move to al-Jabal West, a relocation site next to a garbage dump.

The hearing at the Israeli High Court of Justice was scheduled for September 25th. The day before, the State informed the High Court of Justice that it plans to evacuate an unauthorised Bedouin village by the middle of next year. That means, the villagers are once again left to live their daily life with the looming demolition.

Under International Humanitarian Law (IHL), which Israel is obliged to respect, all Palestinian residents of the West Bank are considered “protected persons”. The status entitles them to the protection of the occupying power whose actions in the occupied territory are restricted by numerous regulations. One of them is the prohibition on forcible transfers of protected persons inside the occupied territory regardless of the motive. Forcible transfer and extensive destruction and appropriation of property are listed as grave breaches of IHL in the Fourth Geneva Convention and are considered to be war crimes under international criminal law.

If Khan al Ahmar goes, will the rest subsequently go as well?

Besides belonging to the 46 communities facing the risk of being transferred to relocation sites, Khan al Ahmar is also located in the strategic E1 area, near the settlement of Ma’ale Adumim east of Jerusalem. Israel has planned to build a new Israeli neighbourhood to the E1 area. The construction of E1 would create an urban bloc between Ma’ale Adumin and Jerusalem and cut the narrow land corridor between Northern and Southern parts of the West Bank. It would thus harm the possibility for a contiguous Palestinian state in the future. It would also exacerbate the isolation of East Jerusalem, the planned capital of the future Palestinian state, from the rest of the West Bank. If implemented, E1 would jeopardise the hopes for a two-state solution.

See No Place Like Home, CIDSE Report on Forced Internal Displacement of Palestinians.