Press release: publication of a public call to world leaders before the UN Sustainable Development Summit – CIDSE
Skip to content 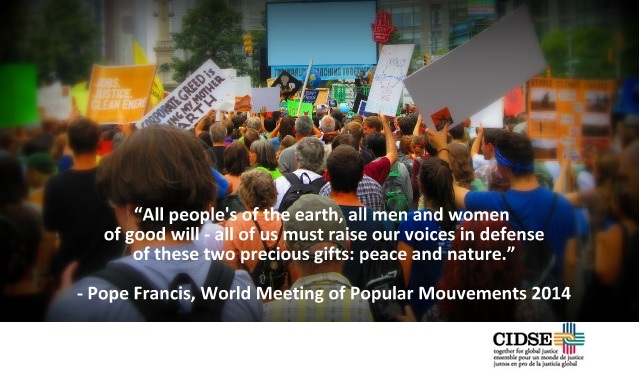 A group of leading voices has come together to demand greater ambition in tackling social injustices, calling for a new emphasis on notions of well-being, a culture of care and shared prosperity. The common statement, co-signed by political decision-makers, writers, activists, faith leaders and civil society representatives, was released just before the United Nations Summit in New York (25-27 September), and before Pope’s Francis address to the UN General Assembly (25 September) in which he is expected to call world leaders to put the poor and vulnerable at the heart of their decisions.

The statement, coming only 70 days before the 21st Conference of Parties of the UN Framework Convention for Climate Change (COP 21), welcomed the growing number of religious leaders from all over the world that continue to speak up on climate change: the encyclical letter Laudato Si’ on our Common Home, the Islamic declaration on climate change, and the Lambeth Declaration signed by faith leaders in the UK are examples of this engagement.

The Sustainable Development Goals (SDGs), according to the statement, seek to respond to many of today’s most pressing challenges, but do not overcome fundamental contradictions in the global economy. They do not tackle the unjust rules governing finance, taxation, trade and investment, the signatories warned, arguing that these are essential elements of the structural transformation that is needed in order to address the root causes of poverty and inequality.

Meanwhile, world leaders were called upon to set limits on natural resource extraction, agree to equitable natural resource-sharing, resist the influence of entrenched interests, and to counter the power of transnational corporations to influence public policy.

They were also urged to renew and redirect finance from dirty energy to decentralized community-based renewable energy production, transform the financial system to support the emergence of sustainable alternatives, reform the systems that exclude the majority of the world from determining global taxation rules, trade agreements, and other areas that have a great impact on them.

In addition, world leaders were called upon by the signatories to allow marginalized groups such as indigenous people and migrants to speak for themselves at the negotiating table.

The full statement can be read here and downloaded in attachment.