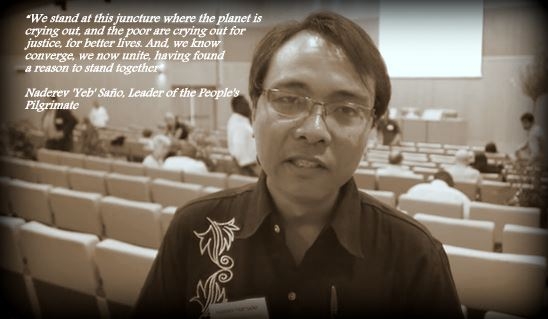 Since September, millions of people around the world have mobilized around COP21. In this month’s ‘Stories for Climate Justice’ series, we’ve explored the initiatives behind the pilgrimages.

Assembled in groups within countries or departing from different parts of Europe, many people of all faiths and none have embarked in a long journey by foot towards Paris to call for climate justice and urgent climate action. Naderev ‘Yeb’ Saño, a former climate negotiator for the Philippines, is the leader of the People’s pilgrimage, a people’s initiative that brings different people together – from activists and volunteers, to faith leaders and concerned citizens – to share experiences, voicing out the local and human stories of climate change.

Father Harper Fletcher, Executive Director of GreenFaith and Coordinator of Our Voices, two faith-based networks that work for climate justice, joins Yeb Saño on his walk to Paris. Both highlight that although response from political, economic leaders and government on climate change has been largely insufficient, at the same time, this urgency has awakened people’s conscience, and has started to forge a certain collective feeling that we must unite to bring about the change that is needed.

In the face of the climate crisis, civil society engagement is key particularly because it can help to make existing solutions visible. Community-led initiatives such as agro-ecology, decentralized management or natural resources, social and solidarity economy, working cooperatives, among other initiatives, are examples of ways of living simply and working sustainably, forging solidarity and a culture of care, while building resilient communities to the effects of climate change. These initiatives can generate significant pressure on those who wield political and economic power.

In their perspective, the Pope’s encyclical Laudato Si’, has enabled people to be more conscious about climate change and the ecological crisis as it makes a thorough diagnosis of the roots of today’s social and ecological crises, while advocating for radical individual and collective change, an ecological conversion that puts people and nature first over private interests. The encyclical also makes a stand for unity through the reinforcement of civil society groups and social movements that can bring alternatives to the forefront, while demanding social and environmental justice.

CIDSE and its members will be joining the Pilgrims at the Global Climate March taking place in several cities around the world on the 29th of November, to join the call for social and climate justice, for a radical change in our lifestyles, to expose alternatives that work, and to call for political action, both at COP21 and beyond!