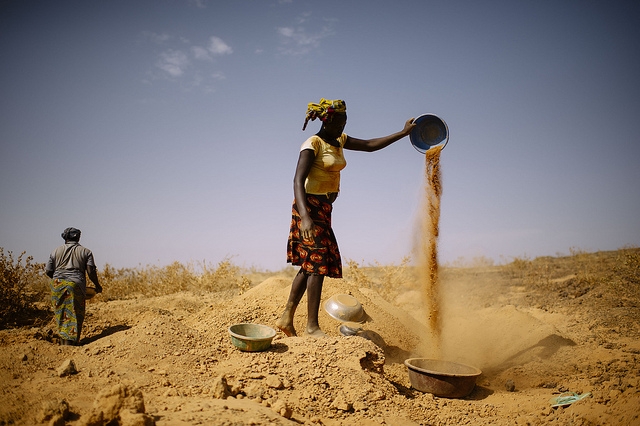 For many women in the Democratic Republic of Congo (DRC), the mineral wealth of the country has become a misfortune. As put by a rape survivor during a religious meeting in Kaniola in 2012 : “Dear Lord, you gave us the natural resources to support our local economy; but these natural resources have become our misfortune; we are always killed, victims of violence because of them; can you kindly take them away?”

For decades now men and women in the DRC have been forced to abandon their land to rebel group violence. Internal rebels (Raiya Mutomboki, Mai mai, Yakutumba) and external rebellions from Rwanda, Uganda and Burundi kill and loot. They take men and women hostages. Women are sexually abused or forced to pound minerals which the men dig up.

Men and women experience this violence very differently. Women are often double victims of this situation at home. They are rejected by their husbands and children who are often forced to witness the rape of their wives and mothers. They are abandoned, often accused of being complicit of their own rape and forced to live alone in extreme poverty with no access to land.

Women play an important role in the local economy of the villages of South Kivu that is traditionally built on agriculture, small trade and cattle. However, decades of violence have made working in fields and growing food too dangerous. Villagers often resort to artisanal exploitation of minerals to survive. Women miners are the majority because they can be paid less and are often easily manipulated. They work in a very difficult environment with no hygiene facilities and potable water. They are often subjugated to forced labor, looting, illegal taxation, torture, sexual violence and other gender based violence. Congolese soldiers and government staff who facilitate the illegal trade in natural resources abuses (IPIS 2005: 57) are usually the perpetrators of gender based violence. Civilians working in the mines also profit from the vulnerability of women miners. They also rape women and sometimes violate their rights.

Children also are numerous in the mines of South Kivu, working in conditions even worse than those of women miners.

Despite their precarious position, women miners find it very difficult to mitigate or avoid these problems. They are often illiterate and under-resourced. The little money they get goes into feeding the whole family. Men tend to spend their money on alcohol/ drugs and prostitution. Yet women are rarely consulted over family decision-making. Neither are their needs and interests as miners well considered.

The World Bank, the Congolese mining code of 2002, laws related to exploitation of children and sexual violence and others have helped to reduce cases of human rights abuse and illegal trade in the mining sectors. However, these initiatives have not brought lasting change, having failed to consider the grounds realities. For instance, the lack of precision about mining zones that has been the subject of dispute between mining companies and artisanal diggers (case of Mukungwe in South Kivu); the presence of some Congolese soldiers in the mines; illegal taxation and so on. Local people are often not consulted when decisions are made about new mining regulation at national or international level. They become passive victims of the situation. Not being sensitized about regulations, they are arrested for not respecting it. Women who are generally unable to read tend to be the greatest victim in this situation. They are often unaware of their rights and legal procedures to work in the mines. They very often submit to sexual harassment to escape the law. In the case of two girls working in the mines of Mubumbano without any legal documents they submitted to a sexual arrangement to escape arrest by the chief commandant.

While there are some good laws and reforms at the national and international level, in practice they are not well followed/ respected. Additionally, the law tends to focus on Congolese soldiers and rebel groups as solely responsible for the human rights violations. They do not consider the negative behavior of ordinary citizens or former combatants working in the mines.

The way forward to give both men and women a chance to work in the mines is to promote security and respect of human rights by building mining regulation in an inclusive way which affirms and/or considers both men and women’s equal rights to get information, access to decision making, control and manage the resources. The roles of men and women miners are essential in the sector; their experiences and the economic value of their contribution must be largely documented. Policies and implementation strategies need to increase women’s security and empowerment in the sector; and at the same time educate men to support women in their initiatives. This will require considering the challenges that women miners face, giving them access to good education to participate in decision making and denounce the cases of women’s rights abuse in the mining areas.

Cultural or traditional stereotypes that reinforce discrimination and mistreatment of women should be considered a crime. Those responsible for discrimination and mistreatment should be punished. Perpetrators are regularly not brought to justice. They often bribe the legal authorities who release them shortly after arrest. This discourages some women from trying to access justice.
In sum, it is important to promote legislation that would help to end gender based violence and conflict in mining in general and in DRC in particular. There are many ways to increase the global economy other than using violence. Being rich alone is not safe as many neighbours will always envy you (local Proverb: Mashi). Violence has been used for many years to dominate or control power; but has not solved anything. Women will remain in permanent threat as long as reform does not promote the security of women in the mines, promote their access to lands that are still occupied by the rebels or promote other means of production such as small trade and animal farming.