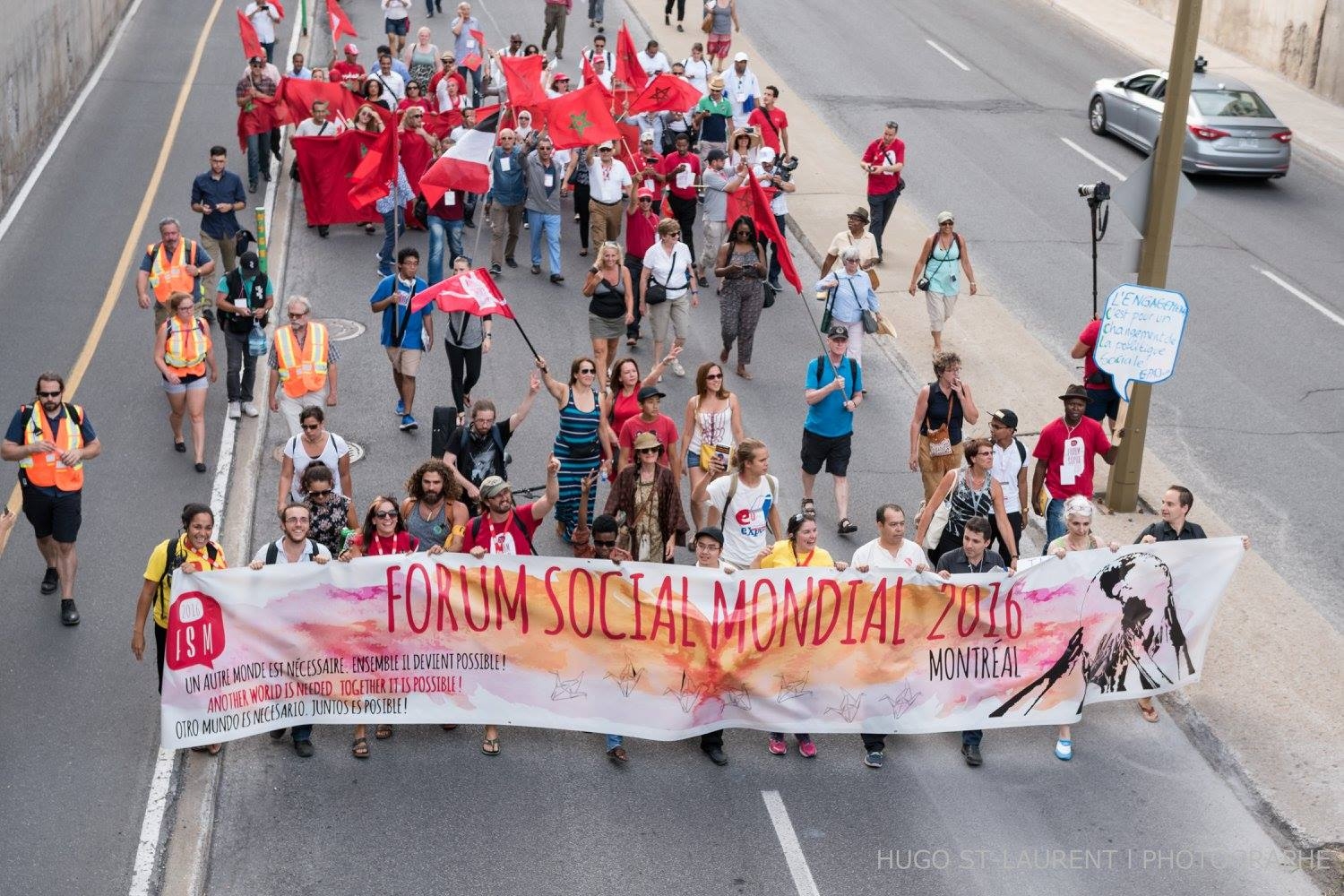 From the attachment you can download the orginal version of the article in Italian.

The question that I have heard more often during the World Social Forum is: “What can we do from here?”. Organising for the first time the forum in the North highlighted the distance that still exists with the global South.

In this rich city in Quebec, during high season, we missed words and thoughts from the South, especially from Africa and Asia. The Canadian borders’ policy has not granted the right of people to travel and to meet. As it is known, at least 250 entry visas requested from foreign participants to the Forum have been rejected. “We are carrying ideas, not bombs”, said the human rights’activist Aminata Traoré, previously minister of culture in Mali and candidate to succeed to Ban Ki-moon as UN Secretary General.

The Montreal gathering has framed the World Social Forum with a different logic. With less South-South exchange and less input to start resistance from the bottom-up (“Crear para crer” as we say in Latin America). But with good reflections and provocations in terms of political influence, the connection with international institutions and the topic of lifestyles. Further, in many debates it appeared quite clear that we cannnot treat each form of resistance in a silos, because the crisis is only one: a crisis of the system and of the values…and in some moments also of hope.

In several countries, lately, a wind of instability of the democratic values is blowing; at the global level it seems that some essential reference points on which to build solid and just agreements for living together are crumbling. The crazy violence and the fanatic madness of terrorism lessens in many people the confidence in the dialogue, in the conviviality of differences. The seductive language of multinational corporations and governments and their double standards lead many to the illusion that something is changing, that there is a growing sensitivity for social and ecological justice. We have to say, rather, that what grows is the capacity to camouflage interests and stay ambiguous, to ensure the usual profits with a greener and friendlier facade.

In this context, the World Social Forum is increasingly necessary, even if it needs to evolve in its strategies. Some suggest that we should promote some thematic meetings (one in the pipeline is on governance and alternative forms of popular power, analyzing the situation starting from Latin America). Others insist that the Forum should make better use of the great power of influence that hundreds of organizations and social movements together can have. Others feel that it is necessary to strengthen and consolidate the relationship with the newer social movements…

For those working from the bottom up, the Forum is always a valuable opportunity to enlarge your network and strategize around actions. It’s like meeting in a large square, under the “tent” of dialogue between cultures, of the debate on climate change and alternative energy, of the resistance to the superpower of transnational corporations etc. I like to call this square with the same name that Pope Francis used: the “globalization of solidarity”.

In Montreal I’ve worked extensively under the “tent” of the communities who suffer the impacts of extractive industries, especially in Latin America. We have gathered a good group of people to reflect, through four seminars, on the violations caused by mining industries, the promiscuous relationship between corporations and states, the criminalization of community leaders and the rise beyond any control of the killings of trade unionists and members of social movements. We called a meeting with Canadian bishops to strengthen the relationship of the Latin American ecumenical network Iglesias y Mineria with this Bishops’ conference, and get their formal support for some of our initiatives We re-launched the pan-Amazon Church Network REPAM as a key tool that somehow replicates, in a church key, the approach of the World Social Forum.

Unfortunately, the “square” of the World Social Forum and all the public spaces where people who dream of a more just world gather, often turn into places without an identity, like a metro station, where the majority of people pass without even looking, each with their own itinerary, busy with their own lives.

A huge challenge to fight the serious violations of social and environmental rights today is to get the support of disinterested and distant people. That’s not something you get by insisting on the “duty” of social commitment, but by showing that taking care of life gives meaning and flavor to the life of each of us. If capitalism is a religion, its rite is consumption and its mystique is the induced desire. We need a new imaginary, fueling more profound dreams, more human ones.

One way to follow this path is to tell stories. Stories of people that act with enthusiasm, of the communities that defend themselves and protect their way of life, their dreams. To learn to tell stories means to write a new history. It happened like this even with the Gospel, which still today inspires the gift of life in many people …

Padre Dario Bossi is a Comboni Missionary originally from Italy and currently based in Brasil. Among his activities he is involved in the ecumenical network Iglesias y Mineria, engaged in facing the impact of large-scale mining on local communities.