Changing the system to address injustices: discussing with Mamadou Goita on the World Social Forum – CIDSE
Skip to content 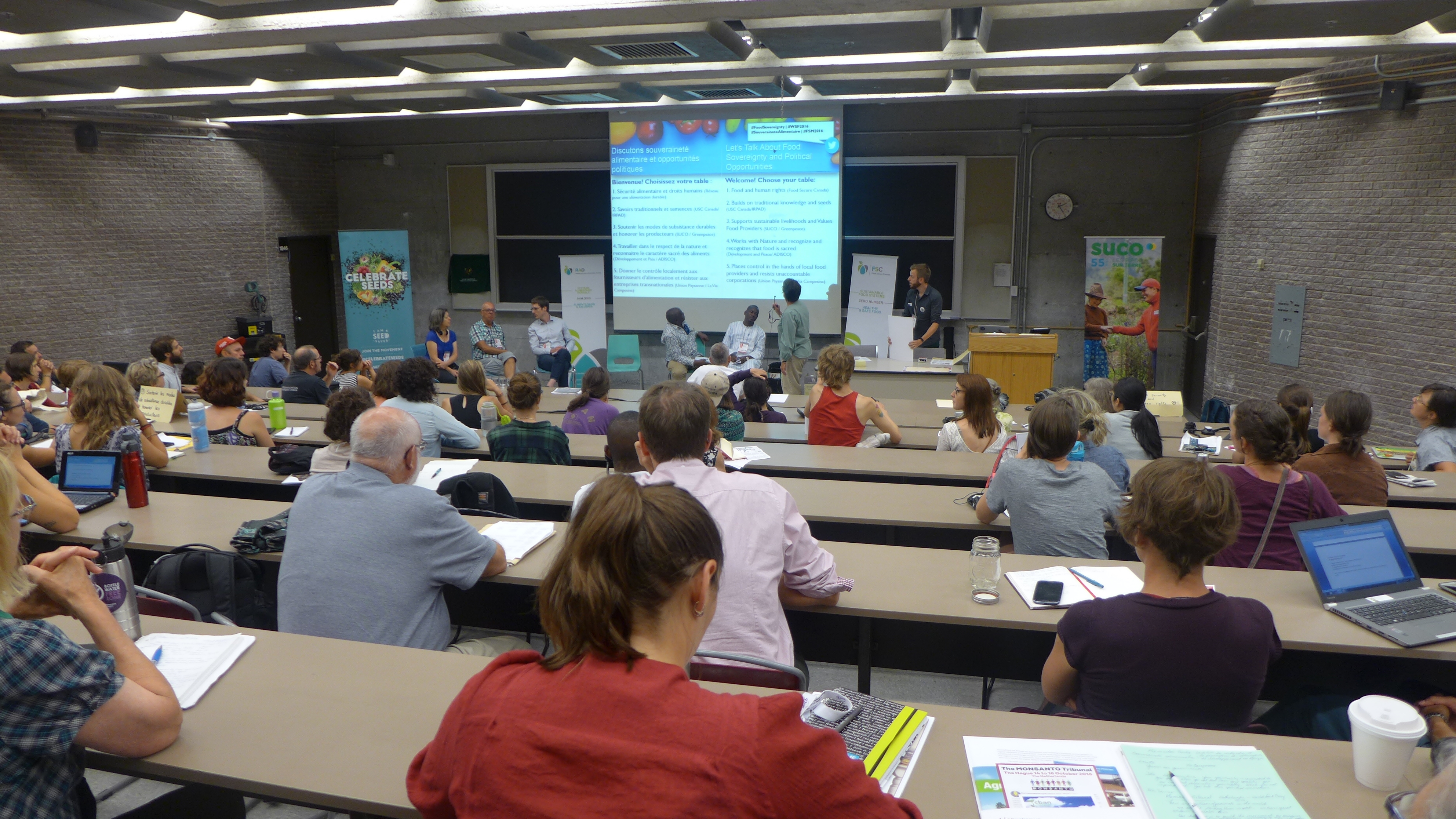 Mamadou Goita is the Executive Director of the Institute for Research and the Promotion of Alternatives in Development (IRPAD/Afrique), based in Bamako, Mali. An active participant of the World Social Forum since its first edition in Porto Alegre, he participated in Montreal as a panelist in the workshop “Agroecology for a healthy planet” organized by Development & Peace with USC Canada, Union Paysanne and SUCO. On that occasion we had a chance to chat with him on the most pressing challenges of our time, on the possible alternatives, and on the role the World Social Forum can play.

What is an important challenge or an injustice that the world needs to address?

There are lots of challenges that need addressing if you look at the different domains. One injustice is the fact of concentrating all the resources in the agricultural industry, while farmers through family farms are feeding the world, and this fact is recognized by all the international institutions. More than 70% of the food that is consumed in the world is produced by small-scale producers, all over the world. The imbalance of the investments in comparison with the industrial agriculture is an injustice that we need to address, the system has to change. This is concerning agriculture, but if you look at the mining resources, you see how the issue of the illicit financial flow is dominating. Those who have resources are those who are poor, exactly like the farmers are those who are hungry. So those who have natural resources in their countries, mainly in the case of Africa, they are those who are suffering from poverty. This is unjust, we need to change it! And if you look at the climate issue: those who are polluting…they are polluting the soil, they are polluting the air, are those who are still benefitting from the investments that we are doing, and this is unjust. Some countries are not polluting at all, but they are continuing to have the burden of the consequences of this. This is a matter of climate justice.

Which alternatives exist for these systemic injustices?
I think first that we need to give power to people, and this means that we have to change the system. The model of governance that we have today cannot work. There are very few corporations dominating the economic system; the State has become the market selling everything and the market has become the State because it is the market that is now making the laws in our countries. The alternative would therefore be to change the system that we have today, giving power to people, listening to what we have been saying in the agricultural sector, in the mining sector, in the financial system, and in other domains like climate and so forth. We need to implement these alternatives in the sense that we need to change the world: another world is possible, but only if you go with the alternatives that we highlight here in these kinds of meetings.

What is the World Social Forum for you?
For me the World Social Forum is a citizens’ space, that can allow not only to analyze the state of the world, but also to draw alternatives and make connections among people, especially those who are committed in the fight against the system. I was lucky to participate in the very first edition of the World Social Forum and since then I missed only one. I saw the way that it has evolved from the past and how it has become today.

How did the World Social Forum change?
The change is firstly related to the context that we are living in. In 2001 things were very tough and corporations tried to hijack processes in the world. There was a lot to say to understand what was going on around the key challenges that we were facing as citizens all over the world. It was a space that was really welcomed in that period, it was necessary to have a counter-power against the corporate system that was present and against some governments that were trying to dominate. I think that a lot has been done in analyzing the context. People were also making some proposals, but on the other hand there was not a lot of follow-up on what was going on between two forums. There was also a very interesting tool in the past, that still exists but its power is now very low, it was the idea of having the “Wall of proposals”, the idea was to look at the key outcomes of the workshops and then use them as a link for collective fight.

Now that we have been growing from Porto Alegre to Mumbai, to the polycentric way of doing the World Social Forum, and back to Porto Alegre, and then to Bamako, to Caracas and Karachi, to Nairobi, Dakar, to Tunisia, then to Tunisia again and then now to Canada…things are completely different. They are different because people are not interested, the locals are not interested in the World Social Forum, or if they are interested they are not aware of what is happening. We say that the forum belongs to the citizens, it belongs to us, and it’s our space. But if you look at what is happening this year, it’s completely different. I was coordinating the forum in Mali in 2006 and we had control on what was happening there, we refused to let policemen come, we refused to let soldiers, we decided that we would look after our own security. This year many of my friends and colleagues from Africa were denied the visa to come here, so this one is like a selective forum, where you choose who you want, and others are not welcome. But the forum is not about that!