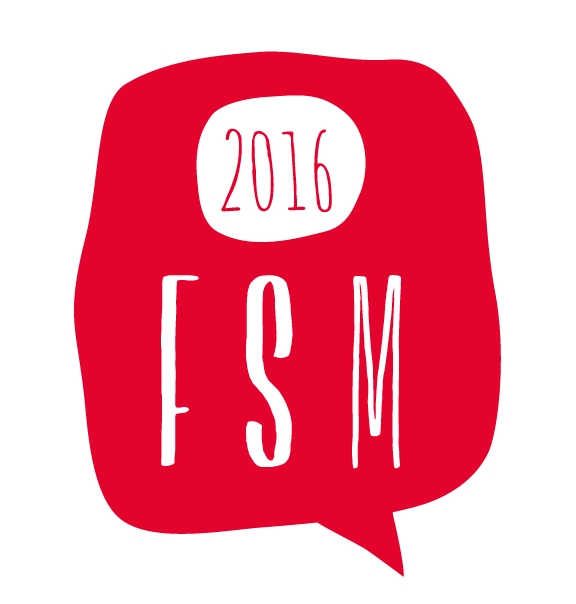 Updates and reflections from CIDSE staff writing from Montreal where many ideas and inspirations for a better world are being generated and discussed at the World Social Forum.

11- 12 August: Dreaming and getting engaged

Thursday and Friday saw us involved in the organisation of the workshop Agroecology for a healthy planet” focussing on youth mobilisation, organised in the context of the campaign Change for the planet – Care for the people, and the events “Agroecology for a healthy planet” and “Let’s talk about food sovereignty and political opportunities” on agriculture and sustainable food. We were equally able to follow events organised by others, and hear this way about new ideas and initiatives. 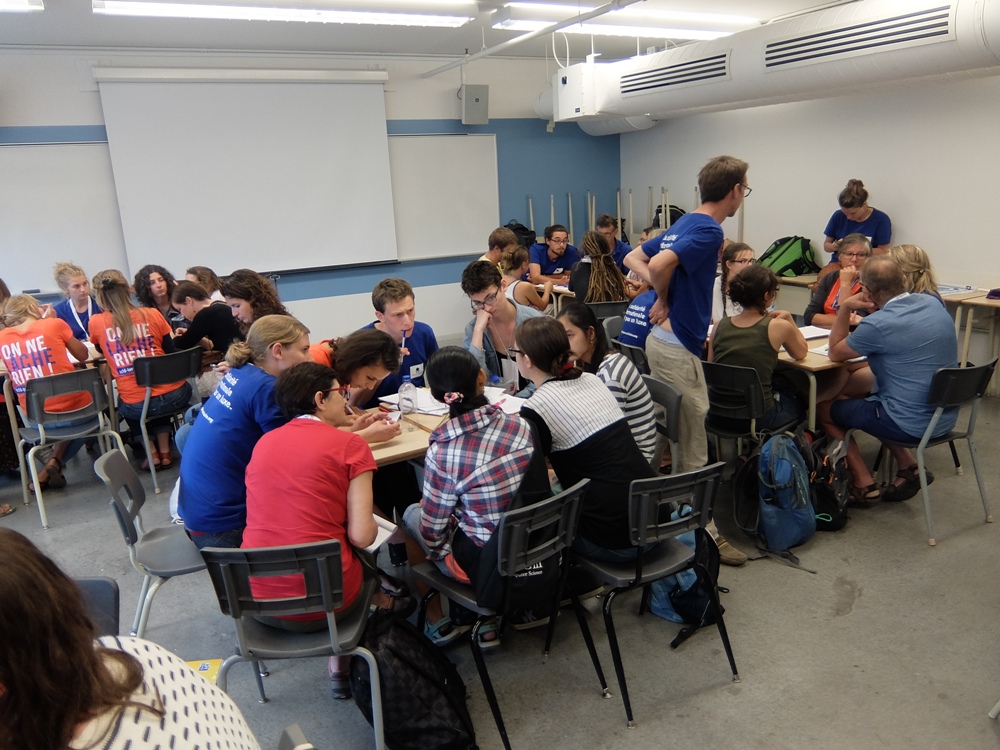 In this World Social Forum young people showed a great deal of commitment; they did not only come to learn and exchange, but also to strategise together for future mobilisations, dream of a better world and build new solutions. In the workshop “Climate change: continuing people mobilisation and promote sustainable ways of living”, through a “market place of stories” we listened to young activists from Canada, Cambodia, France and Honduras sharing their experiences and challenges to mobilise for climate justice. At the core of their messages was the urgency to act both at the individual and political level, the deep acknowledgement that poor people are the most affected by climate change, the need to stop overconsumption. In a conclusive moment, participants shared their personal commitments to move towards a more sustainable way of living and symbolically signed a statement: “We refuse to be a generation that lives selfishly but instead transforms our cultures to prioritise sustainable ways of living…..We demand a future where nations are stewards of our natural resources and practice equitable distribution for all people”. We left the workshop with the conviction that to strengthen our efforts to mobilise for justice we need to continue creating spaces to share experiences and learn from each other. This is the way to empower and connect people who are the drivers of change!

The youth delegation of CCFD-Terre Solidaire also ran the session “Jeunes et mobilisation – Justice Climatique et Souveraineté Alimentaire” aiming at finding solutions to make food sovereignty possible for all. Participants identified among these the importance of educating to sustainable food consumption patterns, bringing consumers and producers closer, leading political actions that citizens can undertake to call for change. A group of CCFD- Terre Solidaire’ volunteers also tried a first-hand practical experiment: from their arrival in Canada they are preparing meals only from food waste or leftover, raising this way awareness on the issue of food waste. 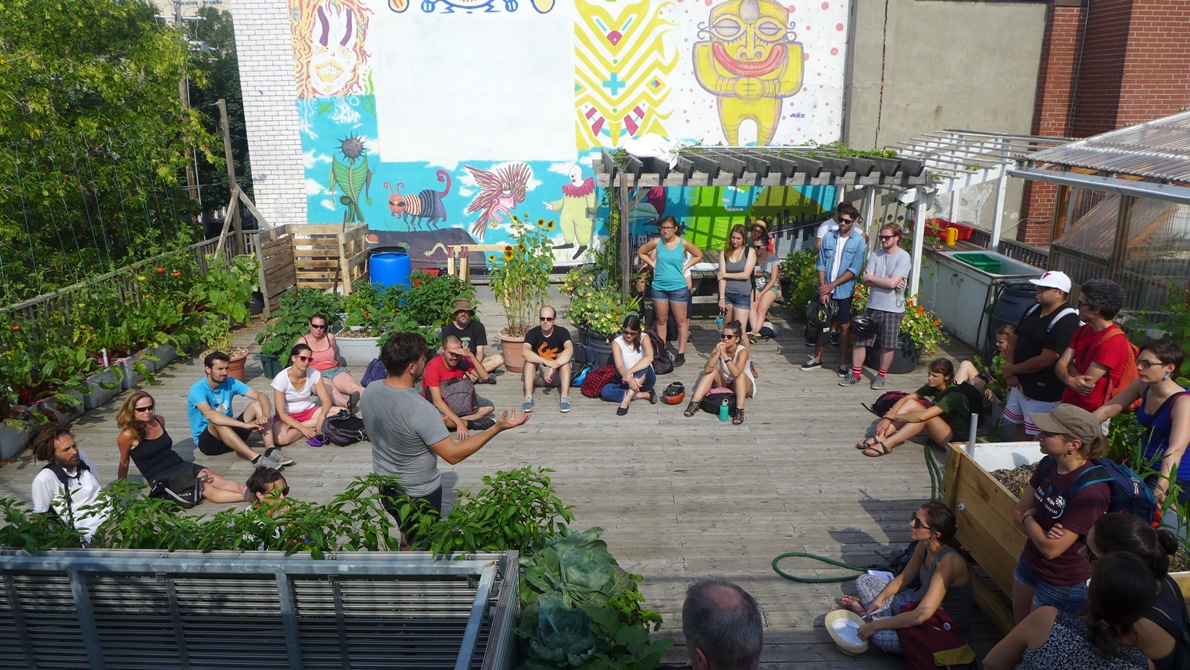 The programme of the World Social Forum included the element of sharing, learning and reflecting on how initiatives can be replicated in other parts of the world. However we believe that this aspect could be even more present in the future. We need to be inspired, learn how to spread similar initiatives, their strengths and weaknesses, and more specifically we need to have a North-South dialogue around such initiatives in order to further build a global movement for change from the bottom up.

At the other end of the scale, we reflected extensively on global threats and collective mobilisations at international level. One element that has come back recurrently is the issue of (new) trade deals. This was largely addressed during the “grande conference” with Naomi Klein, Tadzio Muller (Rosa Luxembourg Foundation), Maité Llanos (Latin American union activist and member of Trade Unions for Energy Democracy), Anne Céline Guyon (Stop Oléoducs, a Quebec grassroots group opposing the Energy East pipeline), Clayton Thomas-Muller campaigner for 350.org.. TTIP, CETA, TISA … are just “obscene new capitalism bills of rights” according to Tadzio Muller. The Paris agreement on climate was included into that list of trade deals -threats by Clayton Thomas-Muller: according to him the deal is leading to a further commodification of nature and to the expansion of market mechanisms to deal with climate change. 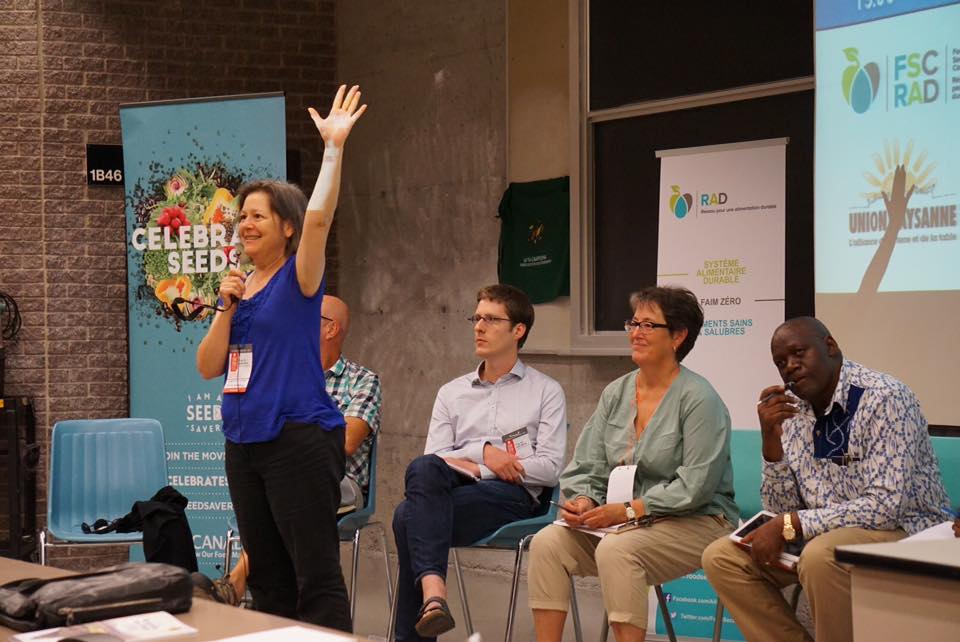 If part of our journey here was done on the scale that goes from local to global levels, another part of it led us from South to North. The two events we co-organised on food, agriculture and climate were in that sense great opportunities to link North-South experiences, exchange practices and strategies. We could see how issues that farmers and food systems are facing are often similar, and on the other hand a convergence of solutions can also be identified: farmer to farmer movements, diversification, building and strengthening short food supply chains… be it in the global North or the Global South, these and many other initiatives are paving the way for a just transition towards sustainable food systems.

Extractivism
Following from the previous days, other interesting thoughts were shared about the thorny issue of extractivism. In a workshop organised by IPCM (International’s People Conference on Mining) Leon Dulce exposed the dangerous strategies of governments and mining corporations. According to Leon, beyond the false arguments of job creation, the main strategy is often to divide communities through co-optation and criminalisation. In another workshop dedicated to corporate strategies to control territories, Fr. Dario from the Church & Mining network explained how mining industries implement war strategies to access resources, through the establishment of permanent state of dispossession, privatisation of territories, plundering and rape. In the particularly inspiring workshop on Gendered Impacts: Indigenous Women and Resource Extraction, women from all parts of the world explained why they are particularly affected by the impacts of mining operations that prevent all source of other activities that are usually carried out by women, from agriculture to traditional medicine. Furthermore, as controversial mining operation often takes place in militarised contexts, sexual abuses by armed forces too often leave the perpetrators unpunished.

Criminalisation of activism
The convergence assembly “People and the Planet before profit! Moving away from free trade and extractivism to dismantle corporate power” started with inspirational words by the two daughters of Berta Caceres. “Berta is not dead, she is multiplied” they said. They were followed by many lively activists who expressed solidarity for all missing comrades who were unable to travel due to visa restrictions by Canadian authorities, and more dramatically to the ones assassinated for protecting life on their territories. The criminalisation of activism confirms itself to be one of the burning issues that we have to address, affecting a great amount of local realities.

Reflecting about struggles
A clear message coming from the World Social Forum is that the interlinked struggles against gender, social and economic inequality are a struggle for systemic change. This takes the shape of a struggle against the current extractivist model and against the continuous financialisation of every aspect of our lives. Even nature is being financialised (see point above by Clayton Miller). “The earth and its resources are the final forms of wealth we have” observed Lidy Nacpil of Jubilee South and the Freedom from Debt Coalition, Philippines, at the event “Building a movement to fight inequality.” Participants at the event stressed that alongside naming the struggles and analysing their roots in colonialism, developing strategic actions is important. “We need to look for Rosa Parks moments,” said Shalmali Guttal of Focus on the Global South at the same event. While immediate struggles for a decent wage, for fiscal justice etc, for a shorter work week are important to demonstrate that things can change and to celebrate victories, we should at the same time not lose sight that these incremental struggles are only a part of the longer struggle for systemic change. 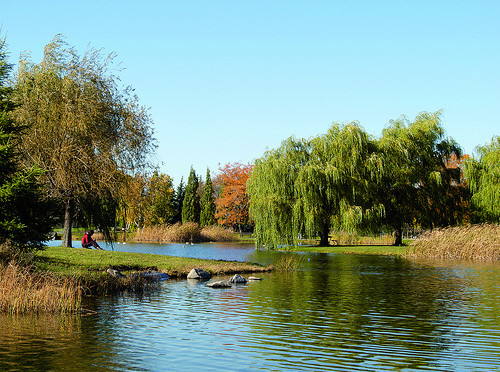 The World Social Forum in Montreal has almost come to an end; in the weekend, activities will move to the Parc Jarry, where discussions will continue. We arrived in Montreal with burning heat and sun, and we will leave the city covered by gray clouds. However, we will leave with high spirits: more aware of many of the issues the world is facing, but also convinced that “another world is possible”, and that many like-minded people are wishing and working hard for this.

We are also motivated by how the WSF showed again, after the big mobilisation in Paris in December 2015, that young people are ready to lead the global movement for change, they have ideas and creativity but they are also ready to live the change they want to see with optimism and dynamism: this has been a very powerful face of the WSF!

Our final thought goes to the “inner transition”, that we were called to undertake by many of the speakers, that asks us to start first a deep dialogue with ourselves to enlarge later to our relatives, our friends, our circles. This inner journey should lead us to the reconnection with nature and the way we relate to it; as Clayton Thomas-Muller highlighted, “when we talk about climate change, we talk about reevaluating our sacred relationship to mother earth”.