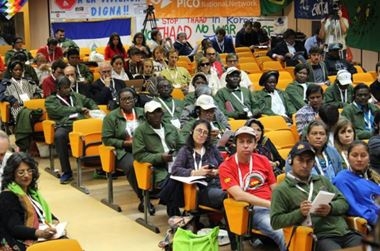 The Third World Meeting of Popular Movements began November 2 in Rome with a panel that includes the participation of Cardinal Peter Turkson, of the Pontifical Council for Justice and Peace, and João Pedro Stédile, the leader of the Landless Peasants Movement in Brazil.

Around 200 delegates from 65 countries, including popular movements of women and men representing those who are excluded from society were invited by Pope Francis, who will address different themes representing the urgent concerns of these movement and of the Pope: Land, Lodging and Labor.
On this occasion they will discuss proposals like “People and Democracy,” “Territory and Natural Resources,” and “Refugees and the Displaced of the World,” with the goal of obtaining new tools and new commitments regarding these problems.
As Juan Grabois of the Organizing Committee said, “There are an enormous number of organizations that are compose of and organized by the excluded, which are not resigned to the misery imposed on them but resist, with the help of solidarity, the current technocratic paradigm. The dialogue between us and the Church is aimed at accompanying, promoting and making visible these processes that arise from the people.”

In function of the focuses of the meeting (Land, Lodging and Labor), he affirmed: “The three focuses continue to be the heart of these meetings; they are rights which are being violated by an unjust system which leaves millions of farmers without land, families without housing, and workers without rights. For that reason the principle protagonists of our meetings belong to the three large social sectors mentioned, the marginalized of the rural and urban areas.”

For Father Dário Bossi, of the Church and Mining Network, “the large extractive industries, like mining, do not bring development to our communities or to our countries, but just the opposite: they leave behind desolation, misery, corruption and death…. For that reason it is fundamental to defend our Common Home and to build new forms of economy and fraternal relationships between human beings and our sister the natural world.”

The Cry of the Poor is the Cry of the Earth
By Ofelia Vargas
“Unity, Organization, Awareness, Elevated Spirit and Action” are the five principles that Popular Movements need to build their strength. That’s what the participants in the Third World Meeting of Popular Movements said in their meeting at the Vatican.
For the Peruvian activist Ofelia Vargas, representing GRUFIDES and the Church and Mining Network, the climate of the meeting is one of great hope: “We are happy that the Church welcomes and promotes these meetings. We see the need for structural changes with the participation of the popular movements in collaboration with other sectors.”
“Defending territories is defending life for these future generations, because the cry of the poor is the cry of the earth,” Vargas affirmed. In the face of the aggressions suffered by indigenous and rural peoples, “We cannot allow the cities to eliminate the rural areas. For that reason, self-management is key, because it opens paths for producing in alternative ways, beginning with what the local and the communal.”
From the perspective of the Church and Mining Network, Vargas maintains: “We want to contribute, in unity with the diversity and plurality of social organizations, to contributing to the building of an agenda of popular movements that will be recognized, taken up and put into practice by our governments; and elaborating citizen and legislative proposals, and promoting a participatory democracy.”
The debates of the first day of the World Meeting of Popular Movements were centered on the theme, “People and Participatory Democracy.” For the second day, the dialogue will focus on the theme, “Territory and Nature.”
The meeting is hosted at the International Pontifical College “Maria Mater Ecclesiae,” and serves as a stage for the 200 delegates to elaborate their proposals which will later be presented to Pope Francis.

The Moment Has Arrived to Act in Order to Overcome this System of Death
At the opening of the Third World Meeting of Popular Movements, João Pedro Stédile, the head of the Landless Peasants Movement in Brazil, affirmed that today we are living in the midst of a profound crisis of capitalism, a system that is currently synonymous with death and backwardness. Our task, he maintained, is to overcome this system.
“We are faced with a capitalist system that is backward, exploitative, expelling (people from the land)…. The planet is being attacked by big money, which has privatized nature and deprived human beings of its (proper) relation to it.” It is time, he urged the delegates, “to discuss new forms of popular politics. The current democratic system based on the French Revolution no longer functions. The people no longer are able to exercise their political capital by means of the vote. More than ever we need to debate and formulate alternative proposals to the problems that humanity is facing.”
Cardinal Turkson recalled the words of Pope Francis in his encyclical, Laudato Si’, pointing to the social exclusion caused by two factors, one social and one environmental, which he called two sides of the same coin. “In this meeting, we have invited you to discuss how we can change things; it’s not a matter of simply being agents of external change, but agents of internal change as well.” He added…. “When we speak of labor, lodging and land, and of democracy, our point of departure is always real people and their real problems. Beyond statistics, it’s a matter of concrete persons.” For that reason, the cardinal pointed out: “We are going to talk about the changes that are necessary, and how the Church and the popular movements can work together to foment the profoundest changes that our society needs.”
Now is the time for action, Charo Castelló insisted…. “In this Third World Meeting, once again in Rome, we want to take another step forward; now is the moment to act. We have analyzed the most diverse realities, we have identified the principal problems, now we must think of which policies to implement, which have as their ultimate goal the true welfare of the people.” Juan Grabois agreed, concluding: “We have to act. Following the method of the social doctrine of the Church, in the first meeting we dedicated ourselves to SEE reality, to know one another; in the second meeting we were dedicated to JUDGE reality, according to the diagnostics, and to make commitments among the thousand organizations who participated; now is the time to ACT.”

Care for Our Common Home is the Fundamental Task of Popular Movements
The second day of the Third World Meeting of Popular Movements began with an emotional tribute to the martyr Berta Cáceres, assassinated for her environmental defense in Honduras, who participated at the invitation of Pope Francis in the First World Meeting in 2015.
During the panel, “Territory and Nature,” Dr. Vandana Shiva, a recognized ecofeminist from India, pointed out that “those who defend nature and the rights of peoples are persecuted.” Added to these difficulties, Shiva pointed to the importance of “living, as the Holy One has asked us to do, respecting the earth and creation.” Each one of us “are Earth. We are not separated from it. The powerful built a separation, what I call eco-apartheid: in our minds and in reality, creating people without homes and without land. The revolution is to return to our “Common Home,” the Earth, as the Pope has said. But once we are home we must respect it.”
Shiva indicated that it is the role of science, the economy, technology to respect and care for creation. In this sense, we have to denounce the destruction of 35 percent of the species in recent years by commercial industries. “We made of agriculture the art of selling poison.” In her intervention, Shiva offered this challenge: “All of the churches and denominations should become a sanctuary for seeds.” She observed that the (trade) agreements TTIP and CETA “ruined our lives,” and she concluded by putting forward the challenge of agroecology: “The earth is given to us so that we live in her, and live well.”
Rosalina Tuyuc, a Guatemalan leader, maintained that “to speak of Mother Earth, of Mother Nature, is to think of life” it all of its integrity, all of its globality. To think of life impels us to “the necessity of defending and responding to any threat.” For Tuyuc, the role of women in this role of “protection” is fundamental, and must not give in to “offers of growth and development” made by companies. Our peoples, she added, will not accept any offer under threat of death: “We are the continuity of life, and for that reason we need to see that the water, the land, and the seeds are elements of life and not elements of the market and of death. When the children of Mother Earth are attacked, we must work together.”

Displaced Peoples and Refugees have the Right to a Dignified Life
On the third day of the World Meeting of Popular Movements, the emphasis was on the importance of guaranteeing displaced peoples and refugees their full rights to a dignified life.
Carlos Marentes, who works on the border of Mexico and the United States, defined migration “as a form of resistance to the system… It’s a constant struggle not to disappear in this system,” which displaces and makes invisible people who migrate, those who are, in the words of Pope Francis, “discarded.” Migrants “are going to resist, to struggle with all of their strength and life” to find a dignified life. For Marentes, “The international community, all of us, are deeply moved before the picture of a dead child on the European shores, of a dead child on the Mexican border, and our indignation is global.” But the politics of governments that blame and sanction migrants creates a framework such that the migrant “becomes a burden on society, and for that reason is accused of being responsible for economic problems in many countries.”
For Nursen Kilic, of the Kurdish Women’s Movement, the causes and conditions that generate migration “are not only war, but also hunger, the lack of potable water, the lack of access to education, to healthcare, to work.” For that reason, the reality of impoverishment and dehumanization requires a decisive response from “international solidarity … to guarantee the liberty, human rights, and above all, new forms of participatory democracy….” For Sahar Francis, a Palestinian human rights lawyer…. “Palestinian villages inside Israel not only are not recognized, they are destroyed and the people are expelled” from their territories. Those Palestinians who decide to risk and remain in their lands “are denied all of their rights.” Francis told of the permanent reconstruction of one Palestinian village that was rebuilt 99 times.
Monseñor Silvano Tomasi, contextualizing the globalization of the migrant reality, affirmed that migration “is not only a European problem, but a global problem, and only by understanding it in this way will we be able to develop a global response to try to end it. The problem is that in all of our societies there exist first-class and second-class citizens, and the latter have no access to the social benefits of the countries they reside in. For that reason they are forced to abandon their homes, their families, their friends, their societies and migrate.”