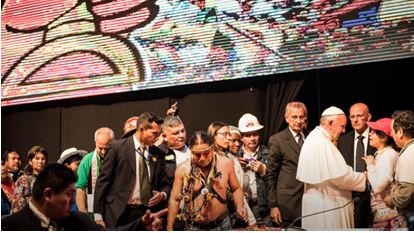 Estimated Pope Francisco, Estimated Cardinal Turkson and members of the new Dicastery for Integral Human Development, Churches and Mining Network, participating in the III Meeting of Social Movements with the Pope, takes this opportunity to take stock of the situation, 15 months after the meeting “United to God, we share a cry”, held at the Vatican in July 2015 between the PCJP and about 30 representatives of communities affected by mining worldwide.

To write this letter, we contacted again all Latin American participants of that meeting, updating information and allowing communities speak for themselves. Many participants remember the event in the Vatican as “a moment of deep spiritual strengthening, especially because of the welcome message of Pope Francis that recognized the dignity, the purpose and meaning of our struggles. All testimonies showed the repetition of the same social and environmental impacts of extractive projects: land grabbing for mining, forced labor, physical violence, criminalization, persecution, marginalization, water and land pollution, prostitution, increased crime, etc. Participants returned from Rome, “with the hope that the church will lead us to a profound and rapid change in the critique of the extractive development model.” They considered their cry echoed long and loud; because for once, “had the opportunity to be heard by large influential players in the world.”

Almost a year and a half went by, but in most cases the situation has worsened. In Carrizalillo (Mexico), the mining company Goldcorp began to operate with greater strength and rigidity, lying off more than 400 workers without justification and in violation of labor laws. In another Mexican region, from which a second participant came to the meeting, Zacualpan, the NGO who accompanied the affected communities had to leave the state because of death threats received by its members.

The situation in the community is highly tense. Also in the Peruvian Amazonia, mining continues to pollute the environment; indigenous peoples denounce to be suffering from new threats every day, yet, they are not renouncing the resistance. In Conceição do Mato Dentro, Brazil, local governments are trying to favor and accelerate approval of a mine extension request, pleaded by the company Anglo American. The legal deadlines for public hearings and requests for clarification were not met. Criminalization of leaders growing and the alliance between the state and the company is strengthened to suppress protests. All this exposes the fallacy of the commitment of the company in function of the dialogue with the communities. Recently, an activist in the region had to be handed over, with his family, to the Protection for Human Rights Defenders Program, given the threats he was being subject of because of his condemnatory positions with regards to mining.

A campaign published in three languages is denouncing the strategies of intimidation and repression of the population adopted by Anglo American and public environmental organizations. Also in Porteirinhas (Brazil), the judiciary continued granting irregular licenses without the compliance with the conditions of impact mitigation by the Canadian mining company operating in the area. In many cases we have observed the eagerness of public authority to authorize projects to ensure rapid sources of profit for States. In Santa Rosa (Guatemala), the actions of another mining company of Canadian and US capital is increasing conflict. The cracks in the houses in the communities increase on account of the mining operations; 90 families were forced to leave the community and to be relocated. Residents complain, “They took our water and land, they criminalize us and they did not even consult us before operating.” In November this year an appeal before the Court of Justice of Canada will be presented for the company to be tried in criminal proceedings. In November 2015, the environmental crime of Mariana (Brazil) caused the worst mining disaster in Latin America, with the rupture of the Fundão tailings dam, causing the destruction of entire villages, the death of 19 people and the environmental devastation of the basin the Doce river (663 Km) and the Atlantic ocean (80 km2 were contaminated). After a year, however, no one has been held criminally responsible. The companies Vale and BHP Billiton wanted to propose an inadequate and unacceptable reparation agreement that was rejected by the Federal Public Ministry (FPM). These days, the FPM denounced 21 people for aggravated homicide, managers and members of the Board of Directors of Samarco, a joint venture between Vale and BHP Billiton, as well as representatives of each of the companies alone. It is urgent the trial of the accused and a fair compensation for all victims and the environment.

In Honduras, on March 3, 2016, Berta Caceres was killed; she was a defender of the rights of indigenous peoples in resistance against mining and hydroelectric projects expelling the Lenca population of that country. Berta took part in the World Meeting of Social Movements in dialogue with Pope Francisco in October 2014; in 2015 she was globally recognized with the Goldman Prize for her valuable struggle in defense of the common house and the lives of the indigenous peoples of Honduras. The persecution and criminalization of human rights activists is growing in many regions of the continent.
In the Guajira (Colombia), indigenous children of the Wayuu tribe are dying of hunger and thirst, while the Cerrejon mine, exploited by the companies Anglo American from South Africa, BHP Billiton from Australia and Glencore from Switzerland, divert Arroyo Bruno to expand the area of opencast coal mining. This is another sign of the culture of waste that discriminates against ethnic groups and condemns them to premature death, turning our common home into a “vast reservoir of filth,” as the Pope has courageously denounced in Laudato Si’. Participants to the meeting in the Vatican reaffirm their conviction, “the Church is one of the few institutions capable of awakening the critical vision of the people, to put an end to indifference, to contribute to a real paradigm shift. When the church is located next to those whose rights have been violated, when it hears and echoes the cry of the dispossessed, a powerful tool of checks and balances will serve the integral human development”. We are deeply concerned about the strategy of KIN New Mining to engage and manipulate churches and Church organizations to obtain social license for the companies and not as an independent factor affecting the real change in the companies’ responsibility and care of creation. In local contexts, different churches and environmental and social organizations are echoing the powerful message of Laudato Si’. Some churches take on the defense of the victims of mining projects and mega projects. Still, others openly support the mining sector in order to receive benefits or because of the unwillingness to develop a critical analysis. “Churches and Mining” Network renews to Pope Francis and the Dicastery for Integral Human Development the following calling:

• To stimulate the discussion in churches at regional, state and local level regarding the gravity of the violations caused by mining, the urgency of building an alternative model to extractivism and vigilance against ‘seductive’ proposals from companies to capture the ecclesial support and transform the church in the mediation of conflicts caused by mining;

• To support the proposal of a campaign of “divestment” of the shares of major mining companies by religious congregations and dioceses that are investing in them;

• To conduct, in particular, an ecclesial reflection on the extraction of gold and the extreme disparity between its actual usefulness and the enormous damages these mining operations cause to the environment and communities. To support even a
liturgical reflection that gets to ban gold in the celebrations of the Catholic Church as a symbolic testimony of our care to the common home;

• To the Holy See to continue its valuable engagement in the discussion on the responsibility of transnational corporations with regard to human rights violations. With the unique opportunity created by the United Nations Open Ended Working Group, the Holy See can support constructive and positive participation by all states in the current negotiations on the international legally binding instrument on transnational corporations and other business enterprises with respect to human rights.

Thank you very much for your attention and for the opportunity it offers to the Churches and Mining Network to attend the Third Meeting of Social Movements in dialogue with Pope Francis. We remain available for questions and discussions on the contact listed below. May the God of Life illuminate the meeting and your delicate and important mission. Sincerely,