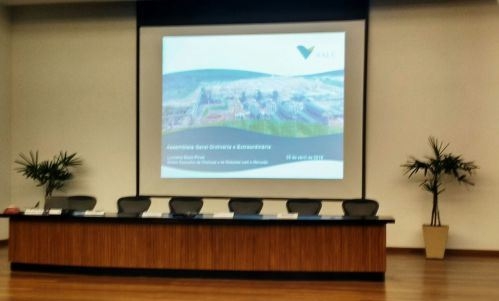 “We are committed to building prosperity both with respect to people and to the environment.” According to the posting on the company web site, this is one of the principle missions of Vale S.A., a Brazilian transnational corporation and one of the biggest mining companies in the world. This is not, however, the way this company has been behaving in practice, according to the people who live in the territories impacted by Vale’s operations. Nor is it borne out in the evaluations of a parcel of actual Vale investors.

On April 25, eight critical investors, members of the International Articulation of People Affected by Vale (AV), participated for the 6th consecutive year in the Vale Annual General Meeting in Rio de Janeiro. Using criteria from Vale’s own policy documents, their objective was to point out the contradictions between the company’s discourse on social and environmental responsibility and the occurrence of serious environmental damages and human rights violations throughout Vale’s projects. They raised their criticisms making use of the AGM protocol that requires any shareholder voting against a motion on the floor to read out a written justification of their opposition to the plenary.

“We decided to participate in the shareholders assembly in order to engage with the corporate world in a way that would force the company to demonstrate more respect for human rights”, explained Melisandra Trentin, coordinator of Global Justice (Justiça Global) and member of the Articulation of People Affected by Vale. In addition to the denunciations of the social and environmental destruction throughout Vale’s operations, our questioning of these bad practices was intended to expose the negative consequences of these violations for the actual corporate image, and, by extension, for its shareholders.

One of the cases most discussed by the critical shareholders was the Samarco mining company’s criminal denial of responsibility. Questioned about its report on the tailings dam breach in Mariana, in the state of Minas Gerais, company officials indicated that the document was not yet completed, even though the tailings dam breach had occurred six months earlier. According to Vale Consultant, Clovis Torres Junior, there was no decision yet about whether the report would be made available to the shareholders when completed. Meanwhile, Vale has already entered the licensing process for three more dams in Minas Gerais, all using the same technology used in the Mariana tailings dam.

Another point raised by the critical shareholders was the ambiguity in the company’s declaration in its Administrative and Financial Report that the disaster in Mariana had had no impact on the financial flows of the company. According to Isabel Corby, a lawyer who is a member of AV, Vale press releases and official spokespeople for Vale had been reporting that, right from the beginning, Vale had been supporting Samarco’s initiatves to repair the damages. “How can the company be assisting in the repairs without any outlay of capital and without having this outlay appear to have any impact on its current expenditures?”

Finally, according to Raphaela Lopes, lawyer for Justiça Global, the shareholders were in danger of being hoodwinked by the affirmation in the Vale Administrative and Financial Report that a definitive agreement had been signed between Samarco, Vale, BHP and the Brazilian state concerning compensation for the victims of Mariana. In fact, the agreement is still subject to approval by the judge of the 12th Federal Court in Minas Gerais.

Another case raised in the Assembly was the Belo Monte hydro-electric dam, a project in which Vale holds shares. According to Brent Millikan, representing the Xingu Vivo para Sempre Movement, Vale had been alerted at various times about the huge social, environmental, legal, financial and reputational risks of the project, even before taking its decision to become a shareholder in Energy North, the project owner. “Today these warnings have concretized in the disastrous consequences of the project for the Indigenous people, fishing communities and all those who live along the Xingu river system, none of which are mitigated or compensated for in the conditionalities of the environmental license.” The shareholder also raised with Vale directors the question of Energy North’s involvement in big corruption schemes in Belo Monte, revealed through the investigations of Operation Car Wash. There is also growing evidence of the economic inviability of the project. This will generate losses for the shareholders but also for Brazilian society in general.

Salary and investment policies
The new salary proposals for Vale Administrators and members of its Council of Auditors totalling up to US$26million was questioned severely by the critical shareholders group. In the opinion of Carolina Campos, a member of AV in Minas Gerais, the proposal is totally at odds with the actual financial situation of the company. “It is shameful to have a Vale director receiving US$240,000/month (benefits not included) when lives, communities and entire cities have been and continue to be destoyed and annihilated by the activities of this company,” said Campos. The shareholder proposed that 90% of the amount proposed for remuneration of Vale directors and members of the Vale Auditing Council be used for a special fund. This fund should be dedicated to social and environmental reparation and reconstruction after the disaster in Mariana, as well as on alternative technologies, even if more expensive, that will protect the communities and the environment.

Juliana Xavier, lawyer and member of AV, also pointed out when she explained her dissenting vote that while the salaries of just 34 Vale staff members are being increased, Vale workers at both national and international levels are suffering from a company policy of salary decreases. Vale has a long-established profit-sharing mechanism with its workers called a ”variable remuneration bonus”. The size of this annual bonus, paid at the beginning of the year, varies according to company profit levels of the preceding year. At the beginning of 2016, Vale announced that it had cut this bonus, given 2015 profit levels, and there would be no final salary adjustment for its workers.

In a similar manner, the investment policies in Vale operations have been marked by deep budget cuts with high social costs. One example is the Carajas Railway that runs for 892 km linking the municipalities of São Luís, Santa Inês, Açailândia, Marabá e Parauapebas. Raising the production quotas while at the same time reducing costs has heightened labour conflicts. In consequence, Vale has suffered economic losses, a fact that the company itself recognizes in its documentation without, however, presenting any proposal to correct or improve the working conditions of its employees.

Motion of Censure
At the end of the AGM, the group of critical shareholder linked to the International Articulation of People Affected by Vale presented a motion calling for all the members of the Vale Executive Board, Administrative Council and Auditing Council who held these positions on November 5, the date of the breach of the Fundão tailings dam in Mariana, to step down. According to the critical shareholders, the occurrence of this tragedy was determined by “acts of commission and omission of all those who provoked, or could have acted to prevent, the biggest environmental tragedy in the history of our country, caused by the breach of the Fundão dam”. The decision to intensify production while at the same time cutting costs on security must also be added. Another argument was the damage caused by the reaction of Vale administrators. In addition to being late, their actions were marked by errors which resulted in damaging the image of the company still more in the eyes of the general public. All of this is evidence of the “imperative for a complete and immediate restructuring of the Executive Board and the Administrative and Auditing Councils of this company”.

When asked about their participation in the Annual General Meeting, the representatives from the communities affected by Vale affirmed that it was quite evident that the company was not open to criticisms or changes in its practices. Despite the limitations of the space and the lack of responses and actions in relation to their criticisms, the group still thought it necessary that those affected by Vale have a voice in the Assembly of shareholders. The Annual General Meeting is a privileged space for making visible to the rest of the shareholder the gaps and omissions in the reports produced by Vale. This is important because these pieces of information are directly related to the magnitude of the risks and uncertainties involved in investments and the perspectives on returns. 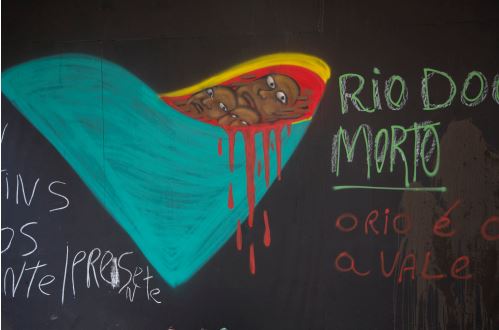 In addition to their intervention in the AGM, the International Articulation of People Affected by Vale also carried out activities in Carioca Square in Rio de Janeiro on April 25. These occurred simultaneously with the AGM and brought together about 50 people. The activities included cultural activities, a theatre performance and a photo exhibit of the disaster in the Mariana/Sweet River basin. There was also a “teach-in” with professors from universities and state and federal institutions in Rio, along with representatives from social movements such as the Landless People’s Movement (MST) and MAB (Movement of Those Affected by Dams). The presenters focused on recent Vale projects and their contexts.

Also present were leaders from the Krenak people, an Indigenous group from the valley of the Sweet River. Douglas and Geovani Krenak spoke about the impacts that their people had suffered after the breach of the Fundão dam. The breach affected not only the cities along the length of the river but also the communities that depended on the water from the Sweet River for their lives. “We are going through severe difficulties because water is life,” affirmed Douglas. “The river was like our mother and father. It gave what we needed to sustain us, it gave us food and recreation. Today our people are being prohibited from carrying out activities along the river that our ancestors practiced”, affirmed Geovani Krenak. Others affected by the actions of Vale throughout the Sweet River basin also presented their stories about the negative impacts of Vale on their daily lives.
After the activities in Carioca Square, members of the International Articulation of People Affected by Vale marched to the former head office of the company on Graça Aranha Street in the centre of Rio de Janeiro. There they drew graffiti and designed and wrote slogans on the black fences that protect Vale’s old offices. The building is no longer being used by the company.

With this action programme of, the International Articulation of People Affected by Vale endeavoured to call attention to the most flagrant cases of rights violations committed by Vale in Brazil and throughout the world. It was a day of protests, making audible the cries imprisoned in the throats of the many who suffer directly from the actions of this company yet are so rarely heard by it.