Lent 2017: CIDSE members help us to recognise that each person is a gift – CIDSE
Skip to content

CIDSE’s member organisations can support you in encountering the gifts of all our sisters and brothers around the world with their Lenten campaigns.

During the season of Lent, we are called to conversion, to open our hearts widely and to deepen our connection with all peoples. In his Lenten message, Pope Francis evokes the parable of the rich man and Lazarus, asking us to recognise the value in each person: “The parable first invites us to open the doors of our heart to others because each person is a gift…”

Each year, most of the members of CIDSE launch Lenten campaigns that serve to help in this journey of conversion over the 40 days of Lent. This year, the Holy Father even asks that we take part in these campaigns: “I encourage all the faithful to express this spiritual renewal also by sharing in the Lenten campaigns promoted by many Church organizations in different parts of the world, and thus to favour the culture of encounter in our one human family.”

CIDSE’s member organisations can support you in encountering the gifts of all our sisters and brothers around the world with their Lenten campaigns. Lent is also a perfect time to participate in CIDSE’s Change for the Planet, Care for the People campaign, which asks us to move towards sustainable lifestyles and to radically reduce our consumption.

Here are the campaigns proposed by our members:

Bridderlech Deelen/Partage.lu, Luxembourg
Their campaign, “The World is Full of Good Ideas! Let’s support them!”, highlights innovative solutions developed by their partners in the Global South for confronting the challenges they face so their communities can overcome injustice. They also offer twice weekly Lenten meditations in their e-newsletter Hope. 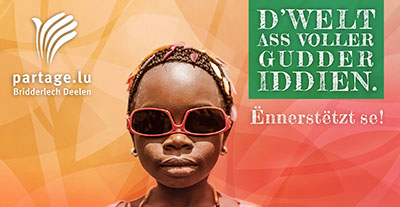 Broederlijk Delen, Belgium
The West African country of Burkina Faso is the focus of Broederlijk Delen’s Lenten campaign, which draws attention to increasing difficulties to grow grain due to climate change. They share the inspiring story of Ammsetou, a woman peasant leader who is changing the circumstances in her community for the better with new farming techniques. 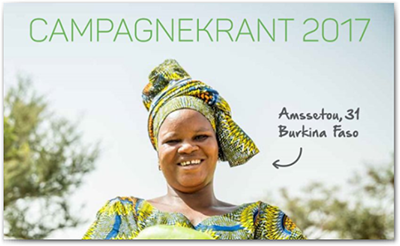 CAFOD, England & Wales
How can a fish the size of your thumb transform a life? CAFOD’s campaign shares the story of Florence, a Zambian woman who received fish from one of CAFOD’s partners and grew them into a new life for her and her family! 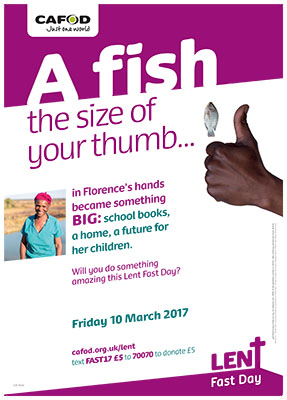 CCFD-Terre Solidaire, France
This year, CCFD proposes a way to counter the constant bombardment of negative headlines in the media with their campaign, “Citoyens responsables, transformons la ‘clameur du monde’ en espérance”. The campaign offers a spiritual journey to inspire citizens to become actors of change and proposes a “Tree of Life” that can grow over the weeks of Lent, as people move from listening and understanding to hope and action.

Development and Peace, Canada
Their campaign “Women at the Heart of the Action” showcases how women must be leading actors in the development of their own communities. Through examples from the Democratic Republic of the Congo, Indonesia, Paraguay and Syria, the campaign shows that, whether working on peacebuilding or peasant rights, when women are at the heart of the action, change happens. 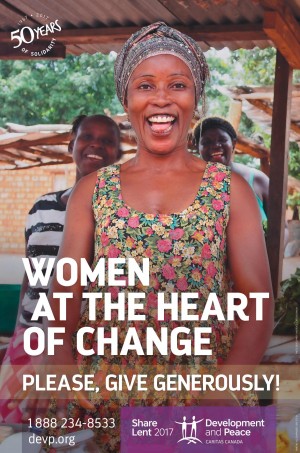 Entraide et Fraternite, Belgium
Mayan peasant farmers in Guatemala introduce supporters of Entraide et Faternité to the concept of “buen vivir” in their campaign, “Bien vivre ou (s’) épuiser: 40 jours pour changer.” A way of life that is centered on simplicity and in harmony with nature, buen vivir is an invitation to live differently during the 40 days of Lent and beyond! 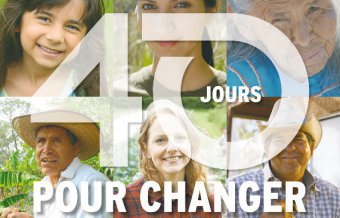 Fastenopfer/Action de Careme, Switzerland
Swiss member Fastenhopfer participates in an annual ecumenical Lenten campaign with other organisations, which this year has as its slogan, “Cultivez la Vie”. The campaign explains how Swiss investments are funding the cultivation of palm oil in Indonesia, which is causing forced displacements and the disappearance of arable lands and precious forests.

KOO, Austria
In Austria, tthree members of KOO are launching Lenten campaigns. The dioceses of St.Poelten and Eisenstadt are both calling on their members to live out their solidarity by fasting in support of communities in the Global South, and the Catholic Women’s Movement is asking its supporters to show solidarity with women who are overcoming obstacles to improve their living conditions. Solidarity can change lives!

Manos Unidas, Spain
In its 58th Lenten campaign, Manos Unidas is focusing on food waste and hunger in the world. Its slogan states that the world doesn’t need more food but more people committed to ending this “paradox of abundance”. It asks that support be given to the 800 million people in the world who are still denied the fundamental right to food, and to commit to eliminating food waste.

Misereor, Germany
“The world is full of good ideas. Let them grow.” With this slogan, Misereor’s Lenten campaign draws attention to the fact that people can help themselves and others if their good ideas and approaches are recognised and supported. Projects in Burkina Faso demonstrate how food, nutrition and livelihoods can be managed, even in periods of drought, through innovative methods and local knowledge. 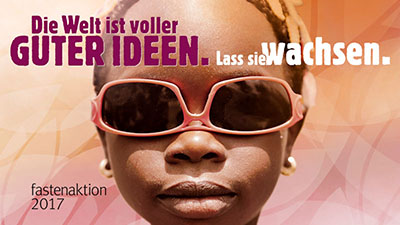 SCIAF, Scotland
This year, SCIAF’s popular WEE BOX activity highlights farming initiatives in Zambia that are improving lives. In addition to collecting donations with the WEE BOX, supporters are encouraged to sign a campaign card asking the Scottish Parliament to support the move to clean energy. 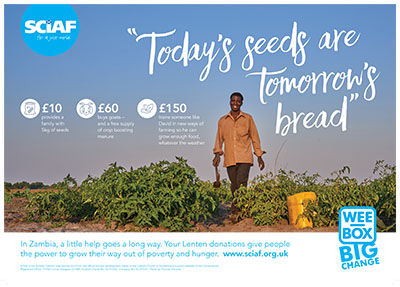 Trócaire, Ireland
Trócaire’s campaign transports its supporters to Honduras, one of the world’s most vulnerable countries to climate change and natural disasters, to feel what it is like to live in constant fear of storms and flooding. It underscores how the poorest communities experience the worst impacts when floods, droughts, famine or conflict strike. The campaign also profiles several of Trócaire’s volunteers and supporters from across Ireland.

Other CIDSE members that are not running Lenten campaigns, but who have other exciting ongoing projects are: Erko (Slovakia), FOCSIV (Italy) and FEC (Portugal). The Center of Concern (US) is also offering Lenten reflections by Dr. Megan McKenna as part of its Education for Justice project.